SWJ Book Review – Head of the Mossad: In Pursuit of a Safe and Secure Israel

SWJ Book Review – Head of the Mossad: In Pursuit of a Safe and Secure Israel 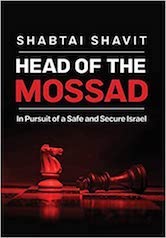 When a former head of the highly secretive Israeli Mossad[1] publishes a political memoir it becomes a newsworthy event, making this book especially important. Following a distinguished military career in Israeli Special Operations, Mr. Shavit served as director of the Mossad from 1989 to 1996, after which he continued to play a prominent role in Israeli national security. Most recently, he serves as chairman of the Institute for Counterterrorism (ICT), which offers courses on these subjects at the Interdisciplinary Center in Herzliya, a private university, and he is a successful business entrepreneur.

Interestingly, Mr. Shavit is also a prominent advocate for greater peace initiatives by the Israeli government to resolve the Israeli-Palestinian conflict and is active with other retired high-ranking Israeli generals and colonels in speaking out on these issues.

The subject of Mr. Shavit’s activism as a peace advocate is not discussed in this book, which focuses on the author’s insights of his time as director of the Mossad (1989-1996) against the backdrop of the national security events affecting Israel, as well as other experiences. Perhaps this could be discussed in the author’s updated memoir of his experiences since then.

Although the current terrorist threats facing Israel and the international community are not discussed in this memoir in depth, Mr. Shavit does devote several paragraphs to explain how terrorism has transformed from being primarily “local, that is, nationalistic and secular, its perpetrator groups struggling to achieve self-determination, autonomy, or independence,” with its impact “usually minor and localized,” to today, with terrorism manifested by the Palestinian Hamas and Palestinian Islamic Jihad, which “is a religious Islamic terrorism whose extremism is increasing with time and whose reach has become global (p. xvi).” ISIS (the Islamic State of Iraq and Syria),[2] the author adds, has taken “terrorism to an extreme that human history had not seen since the Hun invasion of the West (p. xvii).”

The rest of the book is a gripping memoir, which reads like a spy novel, as Mr. Shavit writes about his role in closely witnessing important events, such as the collapse of the Soviet Union and the end of the Cold War, the first Gulf War, the Oslo peace processes with the Palestinians and then with Jordan, as well as the assassination of Prime Minister Yitzhak Rabin in November 1995.

Also valuable are the author’s numerous practitioner insights on the roles of intelligence in counter-terrorism, such as his observation that HUMINT (human intelligence) is “the pinnacle of the art of intelligence” because it “is the only intelligence discipline that enables us to ask questions of the source and receive answers” (p. 20), and its “potential to delve deep into the enemy’s true intentions. This point deserves to be emphasized especially given today’s reality, in which there is an almost religious worship of technology and a tendency to devote the lion’s share of the intelligence budget to it (p. 20).”

It's unfortunate that Mr. Shavit’s memoir does not end with a concluding chapter that brings his account to the current period, but, rather ends with observations of Israel’s achievements in its 2006 war with Hezbollah.[3] An Appendix presents his eulogies of seven prominent former leaders of the Mossad.

Despite these shortcomings, this gripping and insightful memoir is an indispensable resource for those interested in understanding how a leader of the Mossad addressed the national security threats challenging Israel during the 1990s, with passing insights on other significant periods, as well.

Dr. Joshua Sinai is a Professor of Practice, Counterterrorism Studies, at Capitol Technology University, Laurel, MD, where he is developing courses on terrorism and counter-terrorism that will be taught at the undergraduate and graduate levels. He also chairs several doctoral students’ dissertations. He can be reached at: jbsinai@captechu.edu.