Have you ever wondered how intelligence reports come up with surprisingly accurate numbers? For example, the amount of money raised by al-Qaida through hostage-taking or the number of Russian ground forces in Ukraine. It is in most cases not because the intelligence professionals have actually counted the money or counted the number of Russians in Eastern Ukraine, but more likely, the intelligence professional has made a more or less valid estimation of the numbers based on judgement, previous experience and the best available data – i.e. an estimation of a hidden number.

The first view is favored throughout the intelligence community as decision making is simplified by certainty, however, it should be noted that the strive for certainty may lead to flaws in how analysts compare alternate hypotheses, how they express likelihood and confidence and how they filter information. Vice versa, the attempt to assess uncertainty may not provide absolute answers, which does not make decision making any easier, but rather provides several realistic answers to estimative questions.

While this article does not argue that one view is more correct than another, this article does question the methods used to eliminate uncertainty through estimates, and encourages a combination of various estimative methods to enhance precision.

What is a hidden number?

The term “hidden numbers” used in this essay is closely linked with terms such as underreporting, known unknowns, shadow numbers etc. The phrase “hidden numbers“ has been chosen in this connection due to the focus on measurability (hence “numbers”) and the focus on intelligence (hence not merely a matter of underreporting, but often of an opponent trying deliberately to hide information, therefore “hidden”).

Hidden numbers have certain characteristics that define them:

What characterizes hidden numbers is thus the awareness that there is a missing piece of the puzzle and that the size or measure of that missing piece is unknown.

The phrase “hidden number” may not be the phrase of choice in the community. Other expressions like “ballpark estimate” or “ballpark figure” may be used or the more official “educated guess” or – indicating more certainty – the phrase “estimate”. Humor may be used to cover uncertainty, to distract from the lack of available data or simply to discreetly convey to the listener, that the number listed is at best a guess. The POMA analysis is a prime example hereof. POMA is an acronym for Pull Out My Ass. Another way of underlining uncertainty is to add the postfix “-ish” to the number or estimate in question. E.g., the intelligence professional may utter “the number of insurgent fighters in a given area is 250-ish”.

In the following, three methods of estimating hidden numbers will be discussed:

One: The use of proxies 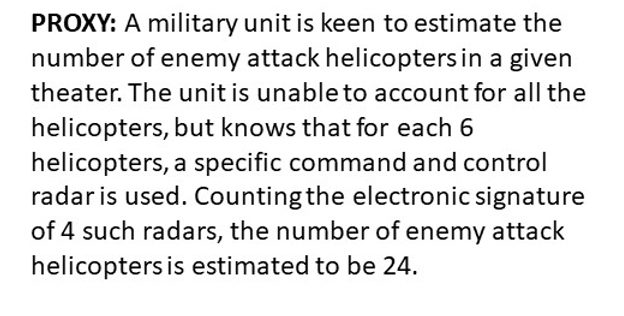 The use of proxies is as old as the craft of intelligence itself. Instead of measuring the exact number of enemy soldiers, armies have resorted to counting the number of campfires at night. In modern times, allied intelligence used statistics to estimate the capacity of German tank production during WWII using a proxy – in this case the serial numbers of various spare parts. 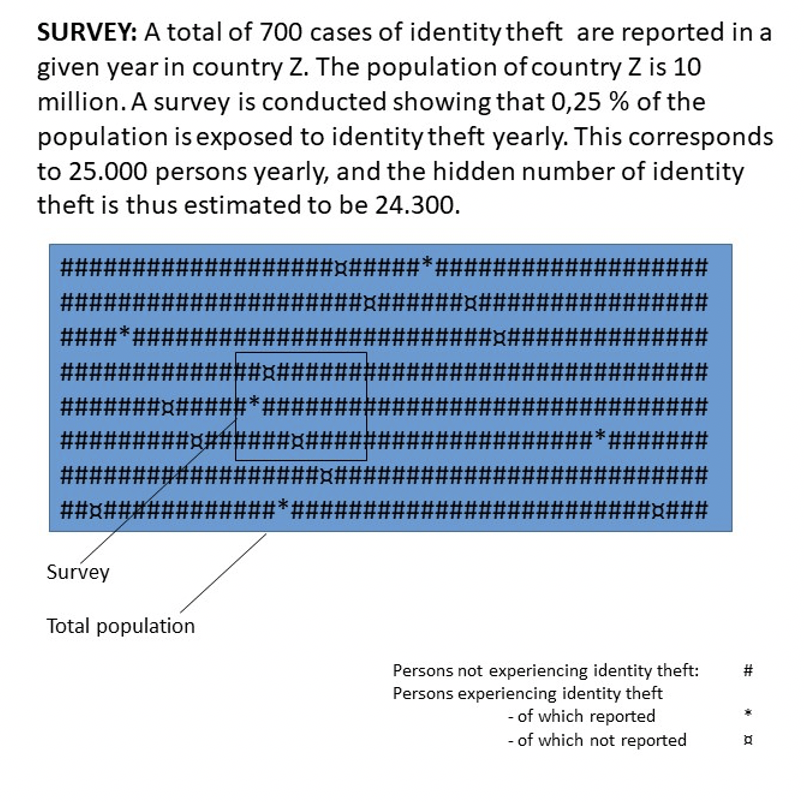 For a crime to be present in official statistics, the crime has to be reported either by a victim, a citizen or by law enforcement agencies. A typical challenge to crime statistics is that some crimes go unreported. For example, domestic violence is kept inside the homes, and rapes and sexual assaults may leave the victim ashamed of reporting. In order to estimate the hidden numbers of crime in Denmark, the Danish Crime prevention council conducts victim-surveys where a larger part of the general population is asked about their exposure to and perception of crime. From this, the general level of crime in Denmark can be assessed and compared to the level of reported crime, thus putting an (estimated) number on the hidden population.

While surveys may not entirely be applicable to many sub-branches of intelligence in the military, as it – for example - may not be possible to conduct a survey among insurgents in Afghanistan. However, the above example shows the applicability of the surveys within law enforcement, and can be adapted to military use: In relation to counter-intelligence anonymous surveys among friendly forces may help establish the number of underreported security breaches or within the cyber domain, surveys can be used to uncover infiltration attempts on social networks or via phishing emails. The survey method can also be applied to measure the reach and effect of targeted influence campaigns against a specific target audience within the domain of psychological operations.

Three: Extrapolation over time or space

While interviewing an experienced intelligence analyst serving in Iraq and Afghanistan, we’ve had the use of extrapolation over space explained: “If you know that a certain number of government officials in the area of operations next to yours are corrupt, then chances are, the same applies to your own area of operations.” This intuitively pragmatic approach may work well in some settings, but has certain limitations: First, for one to extrapolate from one area to another, the areas have to be comparable. In the above example, it could be argued that two regions in, say, Iraq would be comparable, but to the untrained eye, regional differences and peculiarities may go unnoticed. The second limitation is that for the extrapolation to work, the original estimate has to be valid. If the estimate of the level of corruption in your neighboring area is based on obsolete data or on a flawed analysis, then there is no value in applying the same results to your area. 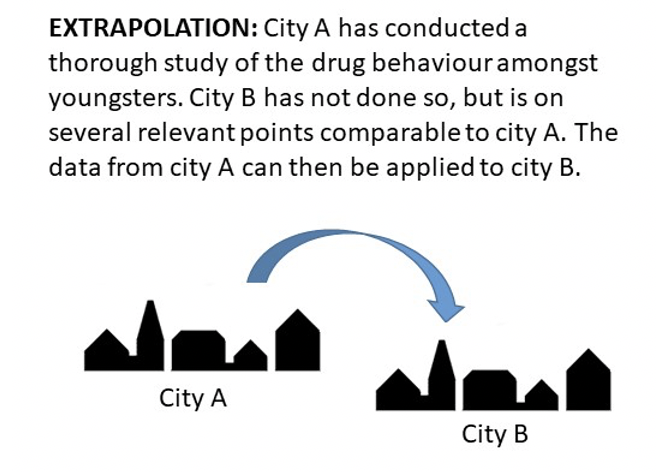 Extrapolation over time bears the same inherent limitations as extrapolation over space; however, both methods are often used as a pragmatic approach. For example, the estimates of the level of underreported crime (see “survey”) conducted by the Danish crime prevention council, are quoted years after their publication based on the assumption that the levels remain comparatively constant over time and that data for example from the year 2009 may apply to the year 2016.

Basing one's situational awareness on experience from previous experiences from another time and space appears widespread among the intelligence community, and presents itself as a low-cost and fast way to estimate - among other things - the size of hidden numbers. This method is also an example of an attempt to eliminate uncertainty, hence risking ignoring new uncertainties that might have been revealed if attempting to assess uncertainty.

Methods in intelligence studies – are we heading in the right direction?

The above examples have provided the reader with an introduction to the concept of hidden numbers and the way to handle them in relation to intelligence. The applicability of each individual approach can be discussed and each has – as explained above - inherent limitations. What is called for is thus not necessarily for an intelligence professional to apply one specific method of analysis, but rather to raise the awareness of the choice of method. Oftentimes, a combination of several methods may yield good results. While the above-mentioned methods may not necessarily bring a specific number to light, the use of several methods may give a frame capturing the possible size of a hidden number rather than an exact hidden number, hence applying the assessing uncertainty perception. In this way, the intelligence professional increases the reliability of the estimate but at the same time reduces the precision. This – however – contradicts the “fetish for precision over relevance”. In other words, if the relevant parameter is not precisely measurable, the measurable parameter becomes relevant.

In the 5th century B.C., the Chinese military strategist, Sun Tzu, wrote: “All warfare is based on deception. Hence, when we are able to attack, we must seem unable; when using our forces, we must appear inactive; when we are near, we must make the enemy believe we are far away; when far away, we must make him believe we are near.” Using intelligence to deceive the enemy is hence not a new tactic. Hence, estimating hidden numbers is likewise related to counter-intelligence and deception efforts, as an opponent may try to make the estimating enemy numbers as troublesome or faulty as possible. A force may try to up- or downplay its numbers leading the opponent to believe that the actual force is weaker or stronger than it actually is. The use of dummy-tanks and artificial trenches at best make the opponent’s intelligence collection tools count more tank or trenches than are actually there or at the least, makes his intelligence collection more of a burden as additional resources have to be committed to evaluating pictures, satellite photos and human intelligence reports.

Summing up, while guestimating is and likely continues to be an integrated part of the intelligence profession, the article here has highlighted ways to raise awareness of how to estimate and what methods to use. Intelligence and intelligence studies can soak up a large amount of fruitful inspiration from various academic fields of study, as this essay has exemplified.  While uncovering hidden numbers may not lead directly to actionable intelligence, but can help provide or clarify situational awareness and establish a baseline understanding of a certain problem.  Further, awareness of the methods employed can highlight the precision of estimates.

In a world where more and more raw data and information is both provided and requested, and where the battlefield is increasingly dotted with sensors,  the ability to distinguish relevant from irrelevant and to apply sound judgements to intelligence estimates, may be what marks the difference between winners and losers in contemporary warfare.

Melanie Hartvigsen is a Scholar associated with the Emergency and Risk Management program at Copenhagen University College. She holds a M.Sc. in international security and law from University of Southern Denmark

Jens Flinch Jørgensen is an intelligence analyst in the Danish Army Intelligence Center with a special focus on issues related to hostages and captivity. He holds a M.Sc. in Geography and is a reserve Captain.

Having confirmation from multiple sources is more the ideal, than sometimes/often happens - there are a number of things to overcome, such as classifications of the data and where it came from. This is usually the case with HUMINT where there is an inbuilt bias against it - where SIGINT is usually preferred.

If HUMINT is all there is and it's timely, commanders (and others) either don't agree with the information and ignore it or, what often has the same effect, demand confirmation from another, non-HUMINT source. This was the case in 1972's Easter Offensive.