The Mexican National Guard: a solution to ensure security or a strong escalation in the process of militarization?

The Mexican National Guard: a solution to ensure security or a strong escalation in the process of militarization?

The establishment of the Guardia Nacional (GN or National Guard) in 2019, was presented by the Mexican president as a tool  to improve the security in Mexico. The new body, with the motto Justice and Peace, was formed by a special presidential executive decree, signed on 11 May 2019.[1]  A new structure with the objective to ensure, reinforce, fill the gaps of security in many Mexican states, where narco-gangs and criminal gangs rage in full impunity. In 2018 the president-elect Andrés Manuel López Obrador (AMLO) declared his objective to enforce issue security in Mexico and proposed to Mexican Congress an ‘ad hoc’ bill to form a new structure of security force, a project yet pending from years but never full realized. In a first wave over fifty thousand men have thus passed from of armed forces and the (dissolved) Policía Federal (Federal Police).[2] 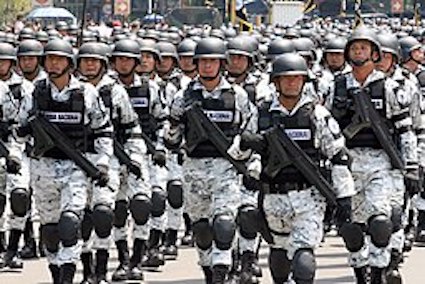 Today, the National Guard’s strength currently stands at about 100,000 troops.[3] In a country devastated from 15 years of so called narco-war, deadly bloody confrontations against cartels and gangs, who reclaimed 200,000 dead, 30.000 desaparecidos,[4] the United States of Mexico required a great effort to combat this tragic situation. The National Guard was deployed to states such as Guerrero, Coahuila, Sinaloa, Tamaulipas, Michoacán, Veracruz, where the units could give a strong answer to insecurity.[5]

Initially the aim to create the Guardia Nacional would have looked at the French and Italian examples; two countries with great traditions and very wide experience with Gendarmerie nationale[6] and Arma dei Carabinieri,[7] respectively founded in 1791 and in 1814. But after four years the claimed objective of “prevention and fight against crime” has not produced the desired results. Violence has increased (despite some minor declines after 2019). There are violations of human rights with journalists the first in the firing line.In addition, the decree declares that after “2024 the armed forces will not deal with public security.”[8] But in the meantime, the reality is very different from the expected formation of a civil-led public security corps. It happened that the men of the Policía Federal, who passed through the Guardia Nacional, were fewer in number than those of the army. It is precisely the composition of the Guardia Nacional that has brought loud protests from civil society, NGOs, and the independent press since it is, in fact, a military and not a civilian police force.[9] The over-criticized dissolved Policía Federal had, however, taken important steps to improve its functioning and counter the problems of corruption, the violation of human rights, and inefficiency.[10] Most guard troops, and all of the top officers, come from the army.

The mix civil and military forces remain on paper.[11] The tasks assigned to Guardia Nacional are too great compared to the objectives and resources provided for by the presidential decree. Not to forget that one of the first missions/operations was to send a large contingent of the Guardia Nacional to the US-Mexico border to block migrants from Central America, according to agreements made with the administration of Donald Trump.[12] Agreements that were reconfirmed with the Biden administration, under the slogan “stay at home” coined specifically to identify this type of migration policy. In 2021, a similar operation was conducted, by the army this time, on the southern border of Mexico. Along the border with Guatemala, a bulk of 10,000 soldiers were deployed. In those four years “the National Guard has been used not only as a police force, but to undertake migration control, staff ports and carry out infrastructure projects.”[13] A mere integration of the tasks, fulfilled by Army and Marine corps? Yes. The Guardia Nacional has the task of protecting ports and airports and controlling many road junctions of great importance, and expanding their range of action. To date, there has been no improvement in security levels, nothing has changed, but rather worsened; the increasing toll of daily killings and disappearances show this terrible trend.

A phase of escalation in the process of the militarization of Mexico?

There is a rich literature on the issue of police militarization, as the works of Kraska show.[14] There is also at the present date, debate on two converging trends outlined by Kraska: the militarization of police and the “police-ization” of the military.[15][16] Therefore, observers and analysts agree that the Guardia Nacional has merely represented a new step in the long issue of escalation of militarization.[17] Meanwhile organized crime and narco-gangs are spreading more and more.[18] The flow of weapons coming from the United States is incessant.[19] Thanks to immense profits by drugs trafficking, they are selling drugs and meth in every part of the world.[20]

The big narco-cartels continue their perennial struggle for control of the plazas; they have infiltrated all aspects of Mexican economy and are present in the illicit trade of the famous avocados, wildlife poaching, high value timber, theft of gasoline from pipelines, and in public procurement, and legal business like fishing, and hotels.[21] The narco-gangs are structured in hyper-armed paramilitary formations, self-built armored vehicles, described  as blindos (armored) or narcotanques[22], as well as drones capable of dropping explosives.[23] Clashes with the military and between rival cartels have reached quasi-civil war levels in recent years.[24] But it is not only the narco-cartels that destroy the lives of Mexicans: the fragmentation generated by these criminal formations has increased their numbers, generating countless criminal gangs dedicated to extortion and kidnapping.

The devastating levels of violence are frightening and a dangerous sign that Mexican society seems to have almost become ‘accustomed’ to these constant brutalities, a very serious indicator of social cohesion that is falling apart. The murders are hardly counted nor are the disappearances that are largely equivalent to brutal murders. A heavy contribution is made by the immobility of justice, because over 90% of crimes are not prosecuted, fueling distrust of institutions. Complaints of human rights violations are increasing every month, as human rights watch explains in its reports. One very important factor is connivance between many of the governors, with their powerful state apparatus behind them, and the drug cartels; many former governors were later discovered to be instigators of murders, especially of journalists.

In essence, judicial investigations remain unmoved by the many tragic murders of journalists.[25]  Mexican journalists are forced to have armed escorts that are numerically insufficient for the purpose, and forced to put up posters saying “Prensa no disparen” (we are journalists; do not shoot us) thus demonstrating the extreme gravity of the situation. Of the many murders of Mexican journalists, only 5% were prosecuted by the police and judiciary. To date, about 1,500 journalists come under the protection program, with an escort assigned to them.[26] To Mexican and foreign observers, it represents a de facto militarization of Mexican states. President López Obrador is, therefore, the subject of strong criticism for ceding further influence to the armed forces; a level of influence that began to grow with the ominous declaration of the start of the ‘war on drugs’ in 2006.

The Mexican news website Animal Politico revealed that for 2023 the GN will have no civilian elements, this was the plan of the Secretaría de la Defensa Nacional (SEDENA) and in this manner the GN will be totally a tool in military hands.[27] Now, with the recent approval from the Senate, the civilian-led law enforcement body will be handed over to SEDENA. “This is really the last nail in the coffin of fully militarizing federal policing tasks in Mexico,” said Stephanie Brewer, director for Mexico with the think tank Washington Office on Latin America (WOLA). “With this reform, Mexico no longer has federal police, civilian police.” With this new law the budget will increase to 7.5 billion dollars, a record.[28] According to Pablo Ferri, a journalist covering the Mexican security situation, the alternatives to the miltary-controlled GN involves:

[S]trengthening of municipal and state police forces and the maintenance of the National Guard in civilian hierarchies, as happens in Spain with the Civil Guard. There, the corporation, with a hybrid spirit between civilian and military, depends on the Ministry of the Interior and not on the Ministry of Defense. But the truth is that right now, Mexico seems to have no other options.[29]

For Shannon K. O’Neal, AMLO’s ‘hugs not bullets’ approach seeks to address the socioeconomic drivers of organized crime by creating job opportunities. Since 2018, his administration has launched an anticorruption drive and disrupted cartel finances. It has also proposed decriminalizing all illegal drugs and offering amnesty to low-level cartel members. Though AMLO has framed his strategy as a novel approach, some experts say his actions—including deploying a new military-led national guard to boost security—echo his predecessors’ unsuccessful tactics. Meanwhile, the homicide rate continues to hover around record levels.[30]

Harsher critics of AMLO are recently expressed both by Mexican[31] and foreign analyst and experts: they consider the approach of Obrador administration against cartels too weak.[32] According to the Justice in Mexico project:

To date, efforts to address this threat have had mixed success, at best, and by most accounts have been lackluster. While it is commendable that President López Obrador has abandoned the failed ‘kingpin’ strategy, Mexico still needs an alternative strategy—a series of deliberate steps—to reduce the power of organized crime and overall levels of violence. Recent developments in U.S.-Mexico security cooperation may help to achieve these goals, but the path ahead remains long and uncertain.[33]

According to expert Ioan Grillo: “Mexico needs a security strategy. But making the National Guard a vast permanent presence on the streets and putting it under military control risks giving too much power to generals, echoing a painful history in Latin America. […] I guess long term—drug policy reform, real crime prevention, and building police forces that work on a basic level.”[34]

Marco Leofrigo is an Italian defense analyst. He was born in Rome in 1963 and currently lives in Catania. He holds a degree in political science and has been working on geopolitics, strategic studies, conflicts, gangs and organized crime, human rights, military and naval history, as well as history, naval history, geo-economics since 2003. He is a senior analyst at the Italian web magazine Analisi Difesa, www.analisidifesa.it where he has published numerous articles. He has been an also active member of the Società Italiana di Storia Militare (Italian Military Society), since 1993.