The Long Game: Countering Iranian Malign Influence in the Mashriq

The Long Game: Countering Iranian Malign Influence in the Mashriq 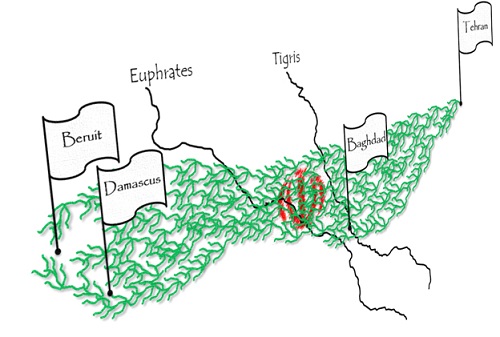 Since the return of the United States Military and the Coalition to Iraq in 2014 as a bulwark against the unrelenting advance of the Islamic State in Iraq and al-Sham (ISIS) across the Western and Northern reaches of Iraq towards Baghdad; political pundits and intellectual circles have questioned how long the American presence will be tolerated by the Iranian elite. ISIS was a mixed blessing for Iran who has benefited from the political turmoil and security vacuums created from the Bekaa Valley in Lebanon to the Diyala Province in eastern Iraq. The Defeat-ISIS Coalition, comprised of 70 nations and 4 international organizations, is now on the “precipice of victory” where its future steps are ill-defined, future steps taken by a down-sized and reduced Coalition, and ever-more countered by an emboldened Iranian regime. This article will define Iran’s historic ties to Lebanon, why those ties remain relevant today, and how severing those links is a fundamental aspect of the new Strategy on Iran.

Before addressing a “way ahead”, it is instructive to define the parameters of this article. This piece is not designed to promote a particular national policy, in fact, a quantified Iranian policy from the current administration is still in its formative stages. The administration has taken steps, through the Countering America’s Adversaries Through Sanctions Act (CAATSA), to further restrict and financially marginalize the Islamic Revolutionary Guard Corps (IRGC). The IRGC’s Quds Force, tasked with exporting Islamic Revolution, was designated as a terrorist organization through similar means in 2007. This commitment along with President Trump’s refusal in October 2017 to re-certify the Iran Nuclear Agreement Review Act (INARA), a periodic requirement of the Joint Comprehensive Plan of Action (JCPOA), are clear indicators that the administration intends on hardening their opposition to counter an emboldened Iran. This policy development was seen during the initial formation of President Trumps staff when he tapped General (R) James Mattis to be the Secretary of Defense. A vocal opponent of the Iranian regime, Secretary of Defense Mattis stated in February 2017 that Iran is “The single biggest state sponsor of terrorism in the world.”

Devoid of a stated policy on Iran, the U.S. Military can comfortably glean from existing statements and initiatives emanating from within the administration as to what effects are being pursued by the Trump administration. Whereas countering ballistic missile development, nuclear aspirations, and aggressive political tactics designed to grow regional hegemony primarily fall within the purview of other U.S. Government agencies, there exists a niche market where the U.S. Military, specifically the existing Defeat-ISIS Coalition organized under United States Central Command (USCENTCOM) operating in Iraq and Syria, can make a significant difference in countering Iranian malign influence. This market lies in Iran’s presence in countries throughout the region where they use the IRGC - Quds Force (IRGC-QF) and associated proxies to build and maintain influence on their neighbors. Their presence is most prevalent in the terrain from Tehran to Southern Lebanon, a presence that has been cultivated for decades and routinely supports financial and logistics flows of terrorist and militant groups spread across the region. This breadth of control is widely known as the “Shia Crescent”, a term originally coined by King Abdullah II of Jordan in 2004. The question to ponder is why this particular relationship to Lebanon is so important to Iran and how breaking this grip will support developing policies to counter Iranian malign influence.

It is always productive to understand the intentions of an adversary before devising a plan to counter them. A good question to ask is “What is Iran’s end state in Iraq and Syria, the Shia Crescent?” There has been much talk about the Shia Crescent and Iran’s intent to maintain a ground line of communication to Lebanon; there is substantial evidence to support this theory. Iran’s ties to the Mashriq did not begin with the conflict in Syria, or the Israeli invasion into Lebanon circa 1982. The symbiotic relationship with the Shia community in Lebanon was cultivated from as far back as 1959 and, to this day, remains fundamental to their vision of the region.

There are particular religious and familial relationships between Shia in Lebanon, Iraq, and Iran. Some of these are lifelong religious bonds created in the Hawza’s of An Najaf, Iraq which assured collaboration throughout the years. In 1959, a prominent cleric named Musa al-Sadr, whose family was originally from Lebanon but migrated to Baghdad in the 1700’s, was invited by the Lebanese Shia community to become their spiritual leader, settling in the town of Jabal Amel. Musa was an outspoken cleric, originally from Qum but moved to An Najaf for religious training and developed a close and life long relationship with fellow cleric Ruhollah Khomeini. Khomeini was well connected to the Sadr family, developing his firebrand version of Shia fundamentalism from 1964 to 1978 while teaching along with another friend, Mohammed Baqir al-Sadr. Mohammed Baqir al-Sadr was cousin to Mohammed Sadiq al-Sadr who headed the Sadrist movement until he was killed along with two of his sons by Saddam Hussein in 1999. The Sadrist leadership was later assumed by his surviving son, Muqtada al-Sadr, who married Baqir al-Sadr’s daughter.

Musa al-Sadr laid the groundwork in Lebanon for eventual Lebanese Hezbollah dominance and Iranian influence in two distinct ways. While in Lebanon, Musa became friends with a prominent Syrian General named Hafez al-Assad. When Assad became president of Syria in 1971, Sadr issued a fatwa stating that his minority Alawi sect was in fact Shia, providing him the needed legitimacy to maintain power. Additionally; Sadr built a religious school in Jabal Amel that, throughout the 1970s, hosted several men who would go on to be major players in the Iranian Revolution. The religious school also graduated several future Hezbollah leaders like Sheikh Naim Qassem who would become Hezbollah’s Deputy Secretary-General and Sayyed Hassan Nasrallah who would eventually take the mantle as Hezbollah’s Secretary-General.

One prominent Hezbollah member who would eventually join the ranks of the Quds Force began his career fighting for the Palestinian Liberation Organization (PLO) against Israel in the 1970’s; his name was Imad Moughniyeh. A legend in the Iranian struggle against the West, he masterminded the 1983 U.S. Marine Barracks bombing killing 241 U.S. Military personnel and wounding over 100 others; observing the attack through binoculars from a nearby rooftop. He was instrumental in kidnapping multiple westerners in the 1980’s and high profile bombings in the 1980’s and 1990’s to include the Khobar Tower Bombing in 1996. Later in his career he took orders from the Iranian Supreme Leader but reported directly to Qasim Soleimani, the IRGC-QF Commander.

The significance and reach of the Quds Force cannot be under-stated. It is a powerful arm of the supreme Religious Leader of Iran, answering to no one else. Its singular goal is to spread the Islamic Revolution throughout the Middle East by forming proxy organizations who will ultimately execute Iran’s vision of political and regional hegemony. Many of their most prolific proxies currently reside in the Shia Crescent: Lebanon, Syria, and Iraq. It is staffed and led by the best officers and only those who vehemently support the concept of velayat-e-faqih; the infallibility of the jurist, the one man (the Ayatollah) who has thorough knowledge of Islamic Law. Although their religious fervor has turned into geo-political pragmatism over the years, Quds Force is still determined to maintain a counter-weight to Israeli regional influence and pose a continual threat to those nations who may hinder Iranian foreign interests.

Qasem Soleimani has faithfully served the Iranian Regime since its inception in 1979 when he joined the Pasdaran, precursor to the IRGC. Soleimani’s military formative years were spent fighting Saddam’s invasion of Iran where he was successful in battle, leading to successive promotions. There is no doubt he is a stalwart believer and defender of the Ayatollah’s vision and the Quds Force mission. For years he has tirelessly pursued this grand plan by developing “Cantons” of Shia zones throughout the Middle East that submit to Iran while fomenting violence in the Sunni zones. We have seen this play out most recently in Iraq and Syria where the Shia Militia Groups (SMG), a sub-component of the Popular Mobilization Forces (PMF), are operating with the direction of Iran and, in some cases, Lebanese Hezbollah. Soleimani, his Quds Force, Hezbollah, and Shia proxy organizations predominately found in the Shia Crescent are singularly trained on the goal of ensuring Iranian-led Shia hegemony in the region.

The Play Book; “Block the plays, be prepared to take out the players”

The Shia Crescent, discussed earlier in this paper, has historically been described as a “land bridge” that travels through Iraq and Syria into Lebanon. It is not simply a point to point route across the terrain, it is a deeply imbedded and influential network of conduits that are fused into communities, Sunni and Shia alike, to elicit control by any means necessary. This “root system” can be effectively severed through a methodical professionalization of security forces and governance in both Syria and Iraq. In Iraq, continued U.S. and Coalition training along with Advise, Assist, Accompany and Enabling (A3E) of the Iraqi Security Forces (ISF), Federal Police (FEDPOL), and the Border Guard Force (BGF) is critical to denying the Quds Force access across the Syrian/Iraqi border. In Syria, applying comprehensive local governance oversight and support will strengthen Syrian communities to the point that their leaders, security forces, and economy will be able to resist the destabilizing influences of Iran.

U.S. and Coalition Forces have kept a watchful eye on malign Iranian and associated proxy actors, both in Iraq and Syria. These are members of organizations that either directly fall within designated terrorist organizations (Quds Force), facilitators of terrorism (IRGC), or proxies of these organizations. A concerted, formalized targeting effort must be established that defines who will be targeted, lethally or non-lethally, in what sequence, where, and under what circumstances. U.S. Military leaders, along with their Coalition partners, need to establish “red lines” that trigger certain levels of targeting and obtain approval and/or acknowledgement from Combatant Command headquarters. Having validated targeting packages and plans ready for action will enhance the U.S. Military’s ability to quickly react to the developing strategy of malign actors in our area of operations.

There is a fleeting opportunity to build upon the stability created by a defeated ISIS, stable Iraq, recovering Syria, strengthened ties with Lebanon and Jordan, and cooperative regional partners like Saudi Arabia and UAE. As ISIS is defeated, the ISF will regain and continue to strengthen control of their territory and borders. The Coalition will support development of local control in communities spanning from Raqqa to Albu Kamal in Syria and countering malign Iranian influence will become a necessary addition to the Combatant Command Lines of Effort. Soleimani and his network are the primary contributor to destabilization throughout the region and his influence should be countered at every opportunity and in every domain.

Luke Calhoun is an Army Military Intelligence officer currently serving in Iraq as part of the Defeat ISIS campaign in Iraq and Syria. He is a 24 year Army veteran with over 5 years of service in Iraq.