Iraq and Afghanistan through the Lens of American Military Casualties

The Wars in Afghanistan and Iraq share both fundamental differences and critical similarities with each other and past American conflicts. Unlike the 1991 Persian Gulf War, which involved only 100 hours of ground combat, fighting in Iraq lasted more than eight years and the war in Afghanistan has gone on for more than 11 years. Today, all of American forces are volunteers, compared to a draft for the Vietnam War and earlier conflicts. Aggregate costs are lower: the sum of all US military losses since 1973 represents less than one eighth the number of Vietnam War dead. Conversely, eighteen times as many US female military personnel died in Iraq and Afghanistan (combined) as died in Vietnam. On the other hand, elemental aspects connect all wars – a family’s anguish at the loss of a child, the economic costs of combat, and the dilemmas poised by ambitious foreign policy agendas and limited national security resources.

To appreciate better the differences and similarities of Iraq and Afghanistan both to each other and to prior conflicts, I examine the wars in Afghanistan (2,177 US military dead) and Iraq (4,486 US military dead)[1] through the lens of American military casualties. Because nothing in war hits home harder than the loss and injury of citizen soldiers, sailors and airmen, military casualties are frequently employed to predict public support for a leaders and defense policy.[2] US casualty information is also highly accurate.[3]

I focus on three ways in which Iraq and Afghanistan casualty patterns are similar to each other, (1) historically low MIA/POW rates, (2) low levels of lethality, (3) ratios of deaths from hostile and non-hostile causes) and three ways in which the two conflicts are different from each other, (4) varied lethality patterns, (5) mirror imaging of the role of the Marines, and (6) dissimilar patterns of allied loss). When viewed together, these six perspectives provide a better understanding of the Iraq and Afghanistan Wars and alert us to likely future issues.

The Iraq and Afghanistan Wars share three critical aspects regarding their casualty patterns. Unlike other major wars the US has fought, Iraq and Afghanistan demonstrate: extremely low occurrence of troops who become Missing in Action or a Prisoner of War and high injury survival rates. At the same time, Iraq and Afghanistan experienced ratios of hostile to non-hostile causes of death similar both to each other and to previous US conflicts.

MIA/POW. While the media frequently uses “casualty” and “fatality” interchangeably there are four types of casualties: Killed in Action (KIA), Wounded in Action (WIA), Missing in Action (MIA), and Prisoner of War (POW). However, in Iraq and Afghanistan there are just two types of casualties for all practical purposes: WIA and KIA. In Iraq and Afghanistan, virtually no US military personnel are Missing in Action or Prisoners of War. With MIA and POW figures in the single digits (compared, for example, to almost 8,000 from the Korean War) Iraq and Afghanistan reflect a historic change in America’s ability to rapidly locate missing military personnel). These changes reflect revolutionary new communications, information management and surveillance technologies, the total dominance of the air dimension, better training, and the nature of the adversary and geography. When combined, these factors generate historically low levels of MIA and POW figures, dramatically changing these wars’ casualty profile.[4]

Lethality. A positive result of the 1993 “Black Hawk Down” debacle in Mogadishu, Somalia was a dramatic investment in emergency military medicine. The resulting improvements have been nothing short of revolutionary, including such inventions as the one-handed tourniquet and self-clotting bandages. At the same time the military developed significantly upgraded body-armor. Dramatically improving both military medicine and body armor has made the battlefield much less fatal for American military personnel. Looking at Iraq and Afghanistan casualty figures shows a historic increase in the survival of injured military personnel.[5] 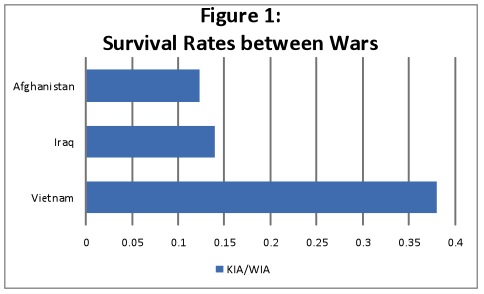 The ratio of military dead to wounded (KIA/WIA) is a common measure of lethality and combat intensity – a larger ratio suggests greater lethality and higher intensity, while a smaller number reflects higher survival rates. As seen in Figure 1, the Wars in Iraq (.14) and Afghanistan (.12) have lethality rates that are similar to each other, but considerably smaller than the Vietnam War (.38). That is, injured US military personnel have more than a 300% improved rate of surviving in these two recent conflicts than they did previously reflecting a historically improved chance of survival from previous conflicts.

Hostile/Non-Hostile. Historically, World War II was the first war where more American military personnel died from combat than from other causes. Interestingly, the percentage of deaths from hostile versus non-hostile causes has changed little since the Vietnam War (excluding the 1991 Persian Gulf War). Non-hostile casualties in the Afghanistan War (19%) and Iraq War (21%) are strikingly similar to non-hostile casualties in the Vietnam War (19%).

It might not seem surprising that the Afghanistan and Iraq Wars are similar. They share basic aspects of time, region and command. Looking at when they were fought, the War in Iraq (2003-2011) completely overlapped with the War in Afghanistan (2001-?). Both countries border Iran and were commanded by Central Command (CENTCOM). Nevertheless, an examination of Iraq and Afghanistan casualty patterns also shows striking differences between the two conflicts. In particular, there are significant differences in: (1) lethality patterns, (2) Marine Corps injuries, and (3) allied losses. 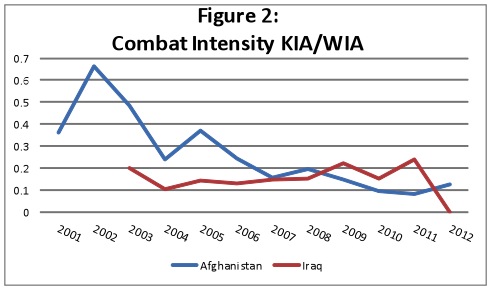 While the total lethality rates to date in Iraq and Afghanistan are similar, close study of each war displays substantially different survival patterns over the duration of the conflict (Figure 2). Lethality in Afghanistan varied more than in Iraq, with a high of .66 (almost twice that of the Vietnam War) in 2002 and a low of .08 in 2011. Initially in Afghanistan there were relatively few US casualties, but given the nature of the combat, those personnel who were injured were hurt severely (furthermore, their survival decreased due to limited access to medical resources). As the conflict evolved into an insurgency and more US troops and medical resources were deployed to Afghanistan (in addition to the supply of improved body-armor), the war became more deadly (more US troops died, especially due to IEDs), but less lethal (a considerably higher percentage of those injured survived). The Afghanistan War lethality rate fell below that of the War in Iraq in 2009. In contrast to Afghanistan, Iraq figures are almost flat with a slight upward trend across time. This level pattern of the ratio of KIA to WIA reflects the rapid arrival of significant combat and medical resources into Iraq, the consistently good access to military medicine and the constant and dangerous fighting throughout the conflict. 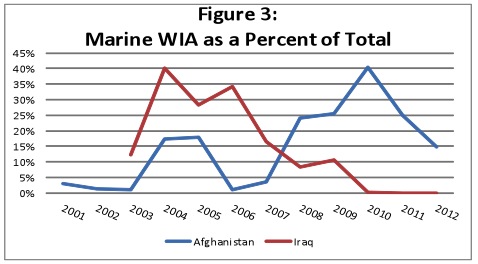 The roughly 200,000 Marines in the Corps make up less than 15% of active duty US military personnel,[6] but in Iraq and Afghanistan they suffered over 27% of all wounds. Starting in 2006, Marines began to rotate into Afghanistan and out of Iraq and the ratio of Marine Corps casualties in Afghanistan and Iraq began to mirror each other, decreasing in Iraq and increasing in Afghanistan. One way to observe this shift is to look at the proportion of Marine Corps wounded in action as a percent of the total US wounded in action (shown in Figure 3). Marines suffered 40% of all US wounded in Iraq during 2004, and experienced the same percent of injuries in Afghanistan in 2010. This high level is especially noteworthy given the Corps’ small size compared to the Army (which has over 550,000 active duty personnel). Given the increased size of the US presence in each conflict (and the voracious demand for similar types of forces), if Marines are in Afghanistan and getting hurt, they are not available to become casualties in Iraq (and vice versa), leading to the mirror imaging observed.[7]

Like the two World Wars, and the Korean, Vietnam, and Persian Gulf Wars, the US was joined in Afghanistan and Iraq by a bevy of foreign allies. On the face of it, the Iraq and Afghanistan coalitions seem quite similar: (1) they each comprised 40 to 50 countries, (2) the United Kingdom contributed the major number of non-US allied troops, and (3) in 2003, the first year of the Iraq War, non-US allies in Iraq and Afghanistan suffered an almost identical percentage of total coalition fatalities (approximately 17%). 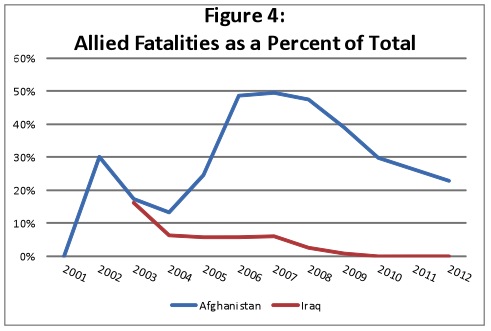 However, the casualty patterns after 2003 diverged greatly (measured as foreign allies’ percent of total KIA, Figure 4). In Iraq, countries began to pull out of the coalition shortly after the invasion (e.g. seven pulled out in 2004, less than one year into the conflict). In contrast, in Afghanistan the coalition actually increased as the war continued (for example The Republic of Korea contributed hundreds of troops initially in 2010). As a result, foreign ally fatalities decreased rapidly in Iraq, becoming a relatively minor percentage (especially when UK troops are excluded). However, in Afghanistan, the percentage of allied casualties increased to almost 50% in 2007 and remained greater than 25% even after the Obama Administration American troop surge. In Afghanistan, most coalition countries maintained their troop contribution (e.g. Spain, which pulled out of Iraq in April 2004 but has almost 1,500 troops still in Afghanistan), supporting NATO’s slogan: “in together out together.”[8]

Casualties represent the common currency of war and a critical measure of strategic assessment.[9] The Iraq and Afghanistan Wars share critical traits – the relative rarity of soldiers, Marines, sailors, and airman who become Missing in Action or a Prisoner of War, a historically high rate of survival from wounds, and a historically common proportion of hostile to non-hostile deaths. But, when viewed through the lens of their casualties, one also sees that the two wars contain critical differences – lethality rates vary dramatically over time in Afghanistan while in Iraq they are largely stable; Marine Corps wounded decrease in Iraq and increase in Afghanistan; and the human costs paid by foreign allies is strikingly different. A close examination of Iraq and Afghanistan War casualties both honors those killed and injured and provides a more complete picture of these conflicts’ wartime dynamics.

[6] Department of Defense figures as of October 31, 2012: http://siadapp.dmdc.osd.mil/personnel/MILITARY/ms0.pdf.

Dr. Scott Sigmund Gartner is a Professor at Penn State’s School of International Affairs and Dickinson School of Law. Author of Strategic Assessment in War (Yale University Press), co-editor of The Historical Statistics of the United States (Cambridge University Press), he has published extensively on war, casualties, politics and strategy. He recently coauthored a chapter on strategy and assessment in Afghanistan in Afghan Endgames (edited by Hy Rothstein and John Arquilla), and has an article on intelligence errors coming out in Intelligence and National Security.  Gartner is currently studying the political and strategic factors that contribute to suicide in the military.

Very surprised that the good professor blew this on off. One reason for low "POW" numbers is that the enemy does not take prisoners in either Iraq or Afghan...ie."Karbala Raid". Maybe the professor should re-enroll in his own "casualties 101" course and ask the question if the war crime of killing POWs is a deterent for capture??? I would welcome that discussion with the professor.