CPT Matthew Allgeyer wrote an article on Heavy Infantry in 2018, in which he argued that body armor has made heavy infantry viable again.[i] His analysis is excellent and focuses mainly on their unique equipment and employment requirements, particularly for urban combat. One issue that was not raised, however, was how these would fit into the order of battle. Here, I propose a solution.

The American Army’s current order of battle for Infantry Brigade Combat Teams (IBCTs) is based primarily on the German model. It has 3 infantry battalions, each comprised of 4 companies, as shown in the image below: 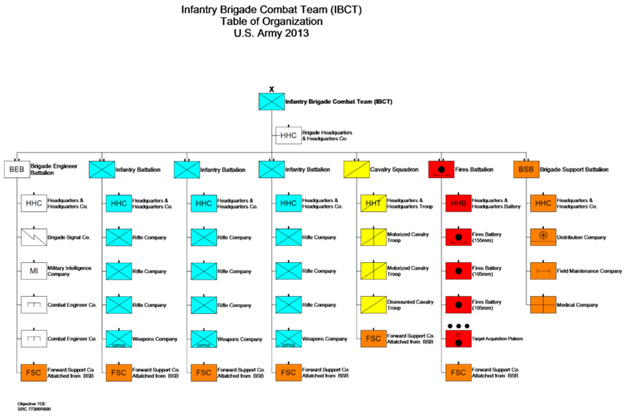 This system is designed to be self-sufficient, and almost a miniature version of a division, with separate operational-level units for infantry and armor. The current model is highly suitable for light infantry, as light infantry fights best in missions that are unsuitable for cavalry/armor and the 3-battalion ‘triangular’ order of battle enables great flexibility and agility. This also fits with Allgeyer’s argument that our current army is trained to perform historically light infantry tasks, albeit more heavily burdened than true light infantry. Heavy infantry, however, will be employed very differently, and thus warrant a different order of battle.

For a regular IBCT, heavy infantry battalions must be employed alongside lighter, more mobile battalions for screening, flank protection, and to fix the enemy in place. Heavy infantry are for landing knockout blows, and cannot keep pace with a more mobile opponent attempting to dodge said blows. To retain flexibility, a 1:1 ratio of heavy to light infantry battalions within an IBCT would be reasonable. This would be a return to the 4-subunit ‘square’ model that emerged after WWI in response to trench warfare. 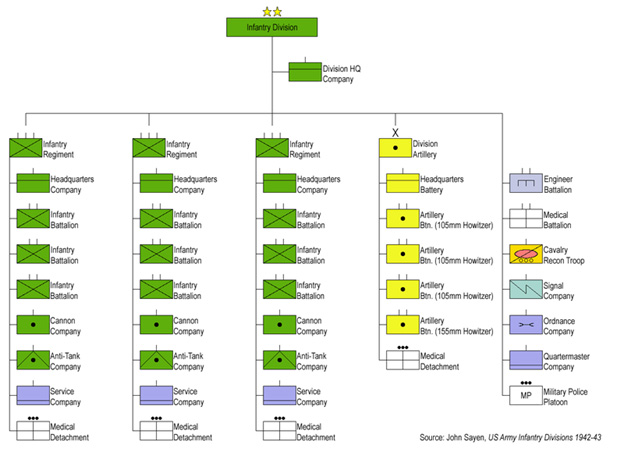 The ‘square’ brigade is ideal for heavy infantry, and especially urban combat. The square divisions of 1918-1940 were designed to handle the trench warfare of World War I, when armies needed to fight through multiple well-fortified defenses arrayed in depth. Once these trench lines were breached, the war of maneuvers resumed, and the agility of the triangle division then became more desirable than the durability of the square division. When World War II broke out, the German ‘war of movement’ (Bewegungskrieg) seemingly proved the combat superiority of maneuver warfare and light infantry. Yet the Germans struggled in urban combat, and the fighting at Stalingrad has many parallels to that at Verdun. In future war, urban combat will continue to be manpower-intensive, and demand formations with great strength in both offense and defense: a battleax, not a rapier. 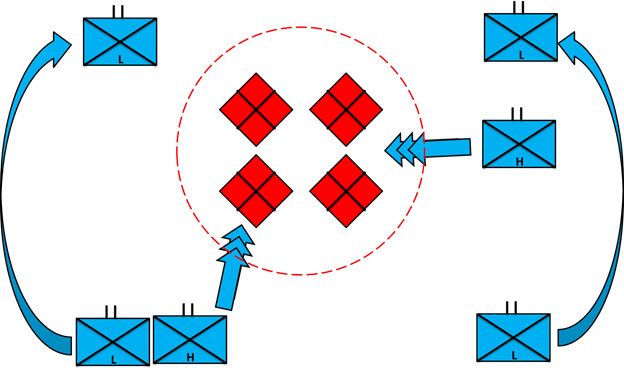 Within a heavy infantry battalion, the French model for combined-arms is best. Heavy infantry companies will almost always be employed alongside armor, both inside and outside of urban terrain. Heavy Infantry battalions will also require their own organic engineering formations, both for breaching obstacles and erecting concrete barriers.[iii] Combining heavy infantry, engineers, and armor at the company level will enable company commanders to operate as a combined-arms force independently, without requiring coordination at higher levels. This will free up company commanders to use their initiative more often, and will be utterly necessary in case of a conventional war with China or Russia, whose heavy weaponry and EW capabilities will force units to disperse and frequently lose contact with their parent units.

Thus, the following organization is suggested,

In conclusion, Heavy Infantry are the answer to the looming possibility of combat in megacities. America does not have any dedicated IBCTs or Divisions for urban combat, but if these were to be raised, Heavy Infantry would form the core. Armored divisions might also benefit from the addition of heavy IBCTs. The current model for all-purpose infantry is extremely useful for training, but specialized heavy-light infantry enable greater tactical flexibility, both when mounted and dismounted. For a global power fighting in every terrain and climate, flexibility is the indispensable core.