The formal demobilisation of the Revolutionary Armed Forces of Colombia (Fuerzas Armadas Revolucionarias de Colombia, FARC) after the 2016 peace agreement with the Colombian government has resulted in a multiplicity of armed actors vying over former FARC territory and resources throughout the country. Conflicts over a monopoly of illicit economies (such as the production and trafficking of coca products including cocaine, the control of illegal mines, extortion rackets etc.) has continued to fuel violence, particularly worsening on the Colombian/Venezuelan border.[1] In recent years, the National Liberation Army (Ejército de Liberación Nacional, the ELN) has continued to expand its presence throughout Colombia, particularly capitalising on territorial vacuums since 2017 where FARC is no longer present, and in some other regions where the organisation has reportedly built alliances with other armed groups.[2] Furthermore, the ELN has seized the opportunity to continue to territorially expand into Venezuela.

Yet a recent report by Colombian think tank Indepaz outlines an inevitable strategic dilemma for the ELN: despite the fact that the insurgency has displayed success in territorial expansion over the last three to four years, it lacks organisational stability to consolidate control.[3] The report identifies that ELN continues to maintain a fringe of influence and popular support in its traditional strongholds, but instead appears to be perceived as an occupying or intimidatory force in areas of recent incursion. Furthermore, the report indicates that ELN is still adopting a defensive posture and does not appear to have a confrontational military strategy towards the Colombian armed forces, nor does it have a strategy to take national power. This is in stark contrast to FARC, which adopted the strategic rationale of the “combination of all forms of struggle in taking power,” stressing the necessity of a political apparatus as a core component in achieving this. The report further outlines that the ELN has faced recruitment issues, and that its capacity to recruit amongst urban youth, the intelligentsia and amongst those empathetic with the “Christian Liberation” ideals that underpin elements of the group’s ideology has continued to decline. It also reveals that whilst the ELN continues to maintain a hard leadership core, it does not have enough mid-level commanders to sustain its expansion. 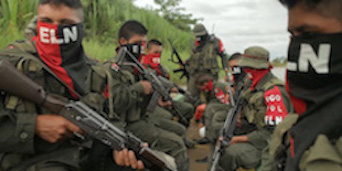 In 2018 in Colombia, I conducted two lengthy interviews with a former ELN leader, then the potential for negotiations with the ELN. We spoke in-depth about the group’s structure, ideological and operational rationales, and overall strategy, including complications around what has now been colloquially described as ELN’s “insurgent federalism.” Recently, some newspaper articles and reports have begun to use this idea to highlight the organisational differences between FARC and ELN, but also that the federated nature of ELN fronts can on face value suggest a supposed division within the organisation despite the presence of an official strategy at periods in the group’s history.[4] As the former ELN leader explained to me, whilst the ELN does have a hierarchy, the way that decisions are made and who is responsible for operations is very different to that of FARC that maintained a strong command-and-control.

Like FARC’s Conferences that determined the binding overall strategy for the organization, the ELN holds Congresses. Traditionally, the Congress findings define the general aspects of the organisation, such as the political line, the direction and operations of the ELN. The National Directorate serves as the highest authority when the ELN Congresses are not sitting, which is internally “elected democratically” at the Congress. When the National Directorate is elected at the Congress, there is an immediate vote of the individuals who make up the Central Command (Comando Central, COCE). COCE serves as the permanent executive, and each of the commanders itself is in charge of a different area of operations: military affairs, political affairs, international affairs, financial affairs, and communications (specifically in terms of relationships between COCE and the fronts. A key difference between FARC and ELN lies in the directives for the overall insurgency. Unlike FARC’s Secretariat that ordered more binding directives, COCE draws the general directives for the organisation in the military, political and social spheres, but it doesn’t necessarily control operations across all fronts.

An article by Colombian newspaper El Espectador outlined that two central features of the ELN that are derived from this complex structural organisation.[5] The first has to do with problems of its leadership’s collective action, because “the command has neither the power nor the infrastructural capacity to homogenise and align all of its fronts,” which in recent times has resulted in repeated difficulties that ELN has faced both centrally and politically. Arguably, this dimension has also impacted on recent stalled negotiations with the Colombian government, which necessitates all ELN fronts being committed to peace talks. Second, ELN’s fronts are present in diverse territories and regions, including the popular support bases and the different demands from these that ELN claims to represent. An additional consideration on the latter is the ELN’s expansion into Venezuela, which further complicates the challenges ELN faces in both leveraging support and legitimacy.[6]

In part, these dynamics are arguably at the core of understanding the ELN’s current “strategic limbo”– the fact that ELN has demonstrated success in increasing its territorial expansion but has faced challenges in consolidating control in these newly acquired areas. In February an intercepted ELN communiqué revealed an internal crisis within the insurgency, where much of its top leadership remains stranded in Cuba after the previous failed round of peace talks.[7] It signalled a growing concern that the ELN has become internally divided and that some of its commanders have become implicated in drug-trafficking. This is problematic, because it suggests a possible shift away from the group’s original ideology to justify engagement in illicit economies,[8] as well as complications regarding unity in leadership which could negatively affect future negotiations. The communiqué mentioned that it was urgent that the leadership in Cuba—who have active arrest warrants in Colombia—return to the country.

It is strikingly clear that ELN’s “strategic limbo” and expanded territorial control is not sustainable, and it is possible that in many ways the insurgency may internally—and operationally—be reaching a breaking point. Although uncomfortable for many, it may prove that this is indeed an opportune time to seriously reconsider and reinstate negotiations between the Colombian government and the ELN. ELN’s strategic dilemma of territorial expansion but incomplete consolidated control can provide a window of opportunity. It is unlikely that the Colombian government can defeat the ELN by military means alone, particularly given its extended presence into Venezuela. Amidst a possibly looming breaking point within ELN, complexities around whether to negotiate or not may actually, in reality, be met in the near future with an increasingly internally divided insurgency operating across borders. Despite ELN’s territorial expansion and the perception of a strengthening movement, the insurgency’s “strategic limbo” may actually signal that the necessity to reinstate negotiations is indeed now.