In December 2013, Mark Stout posted an op-ed at War on the Rocks calling for a reinvigorated debate on counterinsurgency (COIN) doctrine. According to Dr. Stout, that debate is necessary to ensure the lessons of post-9/11 operations are not lost and that we reach a consensus about what works, when, and why. The Joint Staff has obliged by providing fodder for that debate with the release of a new version of the joint COIN doctrine, JP 3-24. As guidance for COIN at the operational level in both large footprint operations like Iraq and Afghanistan, and small footprint or “foreign internal defense” contexts like Colombia, the Philippines, or Mali, it will have relevance well beyond 2014. And while certainly not perfect, the new JP 3-24 does seek to advance the conversation by:

At the request of the Joint Staff J7, NDU’s Center for Complex Operations (CCO) worked with the Army, the Marine Corps, and the rest of the Joint Doctrine Development Community to identify and incorporate key insights on COIN from practitioners across the interagency, academics, and policymakers. These efforts resulted in a number of key issues being reframed to better reflect the state of the art in COIN. From a long list of changes, CCO believes the following five are particularly worth highlighting:

As operational level doctrine, the new Joint Publication does not fully address the broader strategic challenges associated with the decision to launch a COIN effort. However, it does highlight the critical importance of the strategic context to whether COIN at the operational and tactical level has a realistic chance of delivering the desired policy outcomes. In particular, it stresses that COIN efforts can only ever be as good as the political strategy they support, and that operational level commanders should be frank with their military and civilian superiors if strategic assumptions do not match up with reality on the ground.

The new JP 3-24 is not the final word on COIN, and is unlikely to satisfy the most entrenched opponents of the concept. Moreover, crafting joint doctrine is an exercise in consensus-building across the Services, the Combatant Commands, and the offices of the Joint Staff itself.  Many hands guided the pen at different stages of the process, making it challenging for all involved to achieve coherence, completeness, and flow in the final product. However, we believe the new JP goes some way towards answering Dr. Stout’s clarion call by offering a version of COIN doctrine that depends less on Walt Rostow’s “modernization theory” than on a nuanced and realistic assessment of each conflict on its own terms. In doing so, the new doctrine builds on the strengths of FM 3-24 and the previous JP while moving the debate forward. Ultimately the doctrine will be judged on whether it helps the U.S. and its allies understand insurgencies and the most effective ways to counter them – a challenge that shows no sign of flagging. 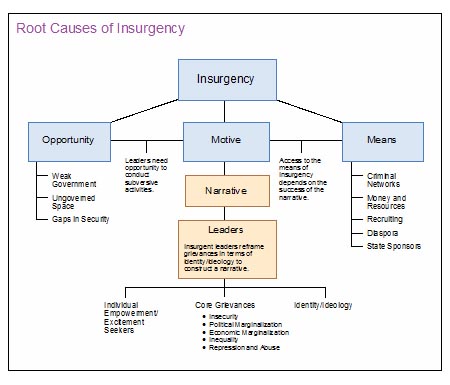 Bernard Carreau is the Deputy Director of the Center for Complex Operations at the National Defense University in Washington. He established and currently supervises a lessons learned program focusing on the analysis of U.S. joint, interagency, combined, and multinational approaches to irregular warfare, stabilization, and security cooperation, with a particular focus on civil-military cooperation within the U.S. government. Mr. Carreau was an advisor to the Coalition Provisional Authority in Washington and Baghdad on trade and investment matters and private sector development. He is a former deputy assistant secretary of Commerce, where he had many years of experience in international trade negotiations, trade law and regulation, and business development and advocacy.

Last sentence of the referenced Paragraph 2 entitled "Local Perceptions not Hearts and Minds:"

"COIN efforts should focus on providing predictable and tolerable conditions for the population, leaving long-term development until there is sufficient security."

Note that "long-term development" (here I would suggest along modern western political, economic and social lines) remains the overriding goal and objective of our activities.

Now, however, we have decided that it may not smart to try to do this -- as we have in the recent past -- in the midst of a counterinsurgency effort.

Why? Because we know now that the population often cannot be "won" or pacified -- but indeed can be "lost" and made more militant and resistant -- when we attempt to achieve our state and societal transformation goals in a weakened state, to wit: during an on-going conflict.

So now we have decided that the much smarter way to achieve our goals (the transformation of the outlying state and society along modern western political, economic and social lines) is to first establish/re-establish security within the country -- herein using the way of life and way of governance that is more familiar to and therefore more acceptable of the population.

Once this has been accomplished, however, and sufficiently trained, armed and capable military, police and intelligence forces put in place (to deal more effectively with those who would resist "development" along modern western political, economic and social lines), only then do we move out smartly -- via other ways and other means -- to alter, in ways that better serve our interests, the way of life and the way of governance of the subject state and society.

Thus, should we say that the above description, in general, represents (a) what we have learned re: our recent counterinsurgency activities and (b) the essence of what the new JP 3-24 explains and brings to the table?