The arrest and extradition of Juan Orlando Hernández, the former president of Honduras, reveals the intricate state-organized crime nexus in this Northern Central American country. Indeed, it is quite difficult to combat drug trafficking and organized crime when the president of the country is (alleged) to be involved directly in drug trafficking.

Yet in previous years, Juan Orlando Hernández was praised by United States government officials for his efforts to combat drug trafficking. He was viewed as a key partner and ally by some leading security officials in the war on drugs. The Hernández administration also touted the decreasing homicide rates as victories in the efforts to combat criminal actors and increase security.

On 22 April 2022, Hernández made his first appearance in the Southern District of New York. Juan Orlando has been charged with three counts, including conspiracy to traffic cocaine into the United States. These three charges could carry a life sentence in prison.

The extensive indictment released by the United States government provides detailed allegations of the high levels of corruption and collusion between organized crime groups and the former president, who was arrested in February 2022. 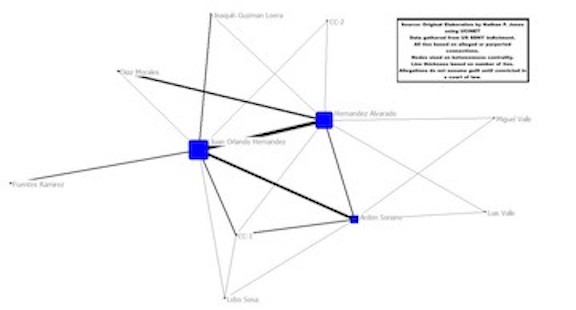 The extradition of Hernández was not a slam dunk, as he tried to block the process from occurring. The Honduran Supreme Court denied his appeal, and he was extradited to the United States. This represented a victory for justice and the implementation of the rule of law, as other former presidents like El Salvador’s Mauricio Funes have evaded authorities. Funes, for instance, stole more than $300 million and later became a Nicaraguan citizen.

Frankly, the corrupt acts of Hernández is not very surprising to anyone following the events transpiring in the country. Juan Orlando’s brother, Tony Hernández, was sentenced to life in prison by the Southern District of New York for drug trafficking in March 2021. The US Department of Justice indicated that he imported at least 185,000 kilograms of cocaine into the United States. Tony was linked with Los Cachiros, which were previously one of the largest criminal groups involved in the transportation of drugs. Juan Orlando was listed in court documents as co-conspirator number four and then later by name more than 50 times.

The corrupt acts are a far cry from his campaign promises. Juan Orlando Hernández assumed the presidency vowing to combat gangs, drug trafficking, and organized crime. He utilized the military and hybrid forces like the Public Order Military Police, known as the PMOP, to arrest members of MS-13 and the 18th Street gang. These tough on crime strategies led to an overflowing of already overcrowded jails and prisons, which have become centers of criminal activity.

While tough on crime strategies have often failed to solve the deep-rooted structural issues impacting Honduras, these policies enabled Juan Orlando Hernández to signal to the public that Honduras was serious about combating organized crime. The former president used what could be referred to as a “show and tell strategy:” market the capture of gang leaders to show the public that the government is winning the “war” against organized crime.

Juan Orlando Hernández also used a “two-pronged” approach of arresting certain criminal groups while having intricate ties with other criminal actors. Around 2013, for instance, it is alleged that Joaquín “El Chapo Guzmán,” the former leader of the Sinaloa cartel, paid Hernández $1 million in bribes. The Sinaloa cartel, which operates in around 50 countries and more than half of the Mexican states, is looking to dominate the lucrative drug trade, and Honduras has become an ideal transit point for cocaine coming from South America.

The intricate relationship between the state and organized crime in Honduras has led some experts to call the country a narco-state. While experts can debate these labels, what is clear is that there is an intricate, arguably symbiotic, relationship between the state and organized crime, making it difficult to separate the two actors. The seemingly endless scandals involving police and politicians connected to organized crime make implementing serious structural reforms an arduous task.

The case of Juan Orlando Hernández shows that powerful criminal organizations can receive protection from the top leaders if the price is right. Organized crime groups need the state apparatus. Countries plagued by corruption, weak institutions, and lack of transparency are fertile grounds for criminal organizations.

Furthermore, the high levels of corruption, crime, and violence have fueled distrust among the Honduran public. Survey data reveals that people distrust institutions and feel unsafe. It also shows that they are willing to take drastic measures to combat corruption and crime.

Discontent with the political institutions resulted in the election of Xiomara Castro, the wife of Manuel Zelaya, the former president who was ousted in a coup in 2009. The new administration in Honduras has an opportunity to address the deep-seated corruption impacting the country.

Decreasing the grip of organized crime on the Honduran state will be an uphill battle. It will require addressing many of the structural problems in Honduras and strengthening the state apparatus, as certain zones in Honduras have been controlled by criminal groups who serve as de facto authorities.