Due to current conscription and training cycles, the People’s Liberation Army (PLA) loses considerable combat power for a significant portion of each year. This loss of combat power likely constrains China’s options in the event of crisis, restricts training opportunities, and creates a potential weakness an opponent could exploit in a conflict. China requires approximately 450,000 conscripts each year, which represents almost 20 percent of the total force.[i] China’s reliance on conscripts primarily affects the ground combat forces,[ii] however, most operational PLA units now experience a three to four-month period when they are considerably under-strength.[iii] Chinese leaders recognize the issues related to the PLA’s conscription and training cycle, and China has numerous potential solutions to the problems. However, until China addresses the risks related to conscription, significant advantages for Chinese opponents exist.

Due to China’s conscription policy, the PLA’s ground forces potentially lose up to 25 percent of their combat power for a period of three to four months annually, and never achieve the level of combat proficiency possible with a professional force. The PLA currently maintains approximately 2 million personnel after downsizing roughly 300,000 members in 2017.[iv] The PLA relies on approximately 800,000 two year conscripts, which means China requires 460,000 conscripts each year to fill PLA ranks and overcome a 15 percent attrition rate.[v] The Army and Rocket Force formerly accounted for approximately 73 percent, or 1.6 million personnel in the PLA.[vi] However, the Army percentage is now approximately 68 percent due to reductions and restructuring the Rocket Force as a separate service.[vii] While conscripts are spread across all services, the Army requires the most conscripts because of the service size and lower technical training requirements.[viii] The Army likely requires about 550,000 conscripts based on 70 percent of 800,000 conscripts. Within the Army, the combat arms rely most heavily on low skill conscripts and face the most significant annual swings in combat power.

The time required each year to grow and train the force creates a substantial weakness for the PLA and especially the ground combat forces. China’s training timeline normally follows a schedule of new soldier induction and basic training in the fall, small unit and individual training in the winter, larger exercises in the spring, and culminates in combined arms and joint exercises in the summer.[ix] Basic training includes 40 days of training from September through December each year.[x] Basic training focuses on transitioning civilians into soldiers, emphasizing uniform wear, saluting, marching, physical conditioning, firing and maintaining a rifle, history of the PLA, and 16 days of political indoctrination.[xi] Because basic training does not create fully trained soldiers, units must supplement initial training with additional skills training, individual training, and eventually collective training before a soldier can function effectively in higher level organizations and combat.[xii] Therefore, it takes the PLA roughly nine months to regain 100 percent combat effectiveness.

China has altered the conscription cycle several times since 1999. Before 1999, China employed a conscription policy of three years for the Army and four years for the more technical Air Force and Navy.[xiii] In 1999, China changed the policy to two years for all services and began developing a professional Noncommissioned Officer (NCO) corps.[xiv] In 2013, China altered new soldier induction and basic training from December to September.[xv]

Figure one provides a visual example of the potential changing levels of China’s ground force combat power and training cycle based on the training schedule since 2013. The precise drop in combat power occurring each September and the exact rate of combat power growth are unknown and therefore debatable in this example. For instance, the loss of PLA combat power in September could be less severe, and the PLA could regain combat power earlier than depicted. The critical aspects of the diagram are that the PLA loses a significant amount of ground combat power from September through December each year, and likely does not regain full combat power again until some point between May and August. These periods represent the weakest and strongest periods respectively for the PLA ground forces each year. 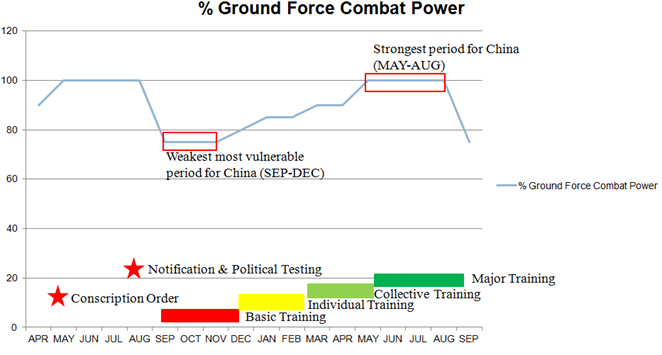 The PLA’s loss of combat power could apply to other services as well. Figure two depicts several significant joint PLA exercises in 2015. Notably, most major joint Naval and Air Force exercises match up well with the conscription and training cycle.[xvi] Synchronization of other services exercises to the same training cycle could indicate potential impacts from the conscription cycle on all services. However, these affects are probably marginal due to lower reliance on conscripts in those services.

Many Chinese commanders and leaders see the shortcomings of the PLA’s current induction, basic training, and unit training cycle and are trying to fix the issues.[xvii] Former Chairman Hu Jintao stated that “the military is facing prominent difficulties in recruiting soldiers, [and] retaining professionals…therefore, we must find the solution to these problems by adjusting and reforming related policies and institutions.”[xviii] There are multiple avenues China could use to address their conscription issues in the future. The examples provided here are not an exhaustive list of possible solutions, but do represent the most feasible and likely alternatives.

The first set of solutions focuses on reducing the requirement for conscripts to maintain combat power throughout each year. First, China could continue changing the ratio of conscripts to officers and NCO’s in the future.[xix] While reducing the number of conscripts and increasing NCO numbers is a difficult work in progress, it provides one of the best solutions for China’s reliance on conscripts.[xx] The PLA’s reduction of 300,000 soldiers is expected to focus on conscripts and officers to enable establishing a professional NCO corps as the backbone of the force.[xxi] Second, China could maintain units over strength while reducing the number of operational units. Reducing the number of units requiring conscripts and maintaining them slightly over strength could reduce the annual requirement for conscripts by 15 percent or more each year and maintain those units at a much higher level of readiness.[xxii] These adjustments might include downsizing and transitioning some existing operational units into permanent regional training bases, further reducing the induction strain on existing units.[xxiii]

The second set of solutions emphasizes adjusting the conscription cycle in ways that reduces the annual effects on the force and minimizes the risk for the PLA. First, China could rotate units receiving conscripts on a biannual basis, ensuring that only 50 percent of units receive conscripts each year. Synchronized induction and training cycles, affecting only half the PLA’s units, could lead to greater combat readiness in the force.[xxiv] Second, China could increase the force size and institute two-year conscriptions at staggered periods, such as every 18 months. Adjusting induction and demobilization times and unit training cycles could lessen the existing training cycle problems, but would probably take years to implement, require more funds, and cause significant disruption in the force.[xxv]

Opportunities and Potential Advantages for the United States

The constraints and weaknesses imposed on China by the conscription policy likely restricts China’s options in the event of a crisis, constricts unit training timelines and resources, and creates opportunities for the United States in the event of a conflict. Because of the conscription and training cycle, China is unlikely to create, or escalate, crises that require substantial ground forces between September and December unless forced to by external circumstances. Further, due to the chaos inherent in trying to mobilize units conducting basic training, the PLA could require additional weeks or months to martial forces and deploy in the event of a crisis or conflict.[xxvi] The greatest U.S. advantage therefore exists between September and December each year, and in the event of a crisis or conflict this period represents the timeframe the U.S. should choose to escalate a crisis or launch a conflict if possible.

[i] Dennis J. Blasko, “Integrating the Services and Harnessing the Military Area Commands,” The Journal of Strategic Studies online Vol. 39 No. 5-6 (2016): 8.

Captain Zach Morris is an active duty U.S. Army officer and is currently attending the Command and General Staff College. He received a BS from the United States Military Academy and an MA from Georgetown University. Find him on Twitter at @Zlm333.