In part 1 two new weapons platforms were suggested as a way to incorporate drones into traditional weapons platforms. In this article, we will look at four platforms which can be developed using existing technology in order to prepare America’s Army for urban combat.

A new UCV would resemble the baby of an M50 Ontos and a D9 bulldozer. Vehicles designed for urban combat have a unique set of requirements: high protection, high- elevation guns, maneuverability in confined spaces, and sloped armor on all sides. Bulldozer elements are optional but desirable, as the vehicle could then be used to destroy fortifications and clear rubble. When fighting alongside dismounted infantry, UCVs must be able to fight at close range and fire at both high and low elevations. Consequently, they should utilize short-barreled guns for better maneuverability in narrow streets, and these should be able to fire both HE rounds and munitions designed to penetrate concrete walls. Speed is less of an issue in urban combat, so these vehicles can afford to be slower than tanks or Bradleys so long as they still have a small turn radius. 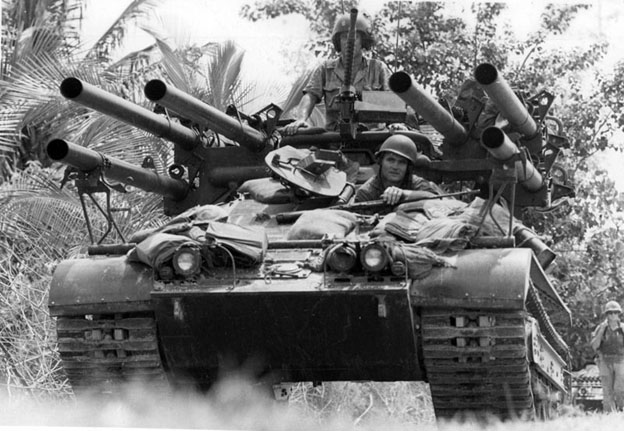 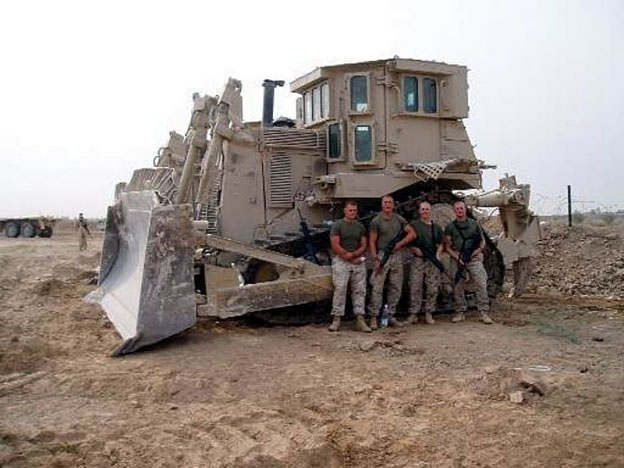 In terms of protection, these vehicles will need to be designed from the ground up to carry cage armor, reactive armor, and MRAP design elements. They can expect to be peppered with handheld rockets, IEDs, and other munitions from all sides: front, left/right, above, and below. The entire hull will need to be designed with sloped armor, especially on top. One option is the pentagonal shape:

Another possible shape is an octagon-shaped hull:

Currently, the M203 grenade launcher has a variety of ammunition choices: HE, HEDP, thermobaric, etc. Mortars should also have this many options. Mortars will be indispensable for fighting in urban areas, particularly among high-rise buildings and against enemy infantry. For most applications, HE will be sufficient, but other situations could require incendiary rounds, airburst rounds, or shaped charges. For example, the RPG-7 uses shaped charges, and is programmed to self-destruct after ~900-950 meters; consequently, numerous militant groups have taken advantage of this and used the RPG-7 as a mortar-like airburst weapon. Mortars with shaped charges could also be used to penetrate the thinner top armor of tanks, increasing the infantryman’s antitank arsenal.

While we’re at it, we should also bring back cluster munitions for our artillery. Older 20-25mm guns could still be used as anti-drone guns using buckshot, airburst, or canister shells (these would also be useful in the Centurion C-RAM). Developing high-low chamber pressure[i] artillery munitions like those used in the PAW 600 would greatly benefit ‘shoot-and scoot’ self-propelled artillery by increasing range without dramatically increasing recoil. Considering the threat of mass artillery/missile strikes in the future, ALL artillery should be self-propelled; the days of towed artillery are over. Even larger siege guns should be self-propelled for shoot-and-scoot; Atomic Annie was able to do this in 1953.

Hazmat uniforms are not new to the American Army’s arsenal, but new versions can be lighter and integrate Kevlar or plate carriers. Gas masks, too, capable of accepting both filters and SCBA equipment could be integrated into ‘hazmat-helmets’ for troops battling in contaminated zones.[ii] Lightweight uniforms should also be developed to protect against thermobaric weapons, which kill using heat, pressure, and loss of oxygen.

The Army has recently decided to shift towards the 6.5mm Creedmoor cartridge as a replacement for 7.62x51 sniper rifles, and some are calling for it to replace the 5.56x45 cartridge entirely. The 6.5 Creedmoor is ideal for replacing 7.62mm ammunition across the board, due to its lower recoil, weight, and superior accuracy at longer ranges. The cartridge is also ideal for belt-fed weapons of all calibers. However, multiple problems arise when trying to replace the M4 and its 5.56mm cartridge. These include: greater weight, higher costs, and lowered magazine capacities due to the larger case diameters.[iii] Textron’s polymer bullets have the same advantages versus the 7.62 and disadvantages vs the 5.56 as well. 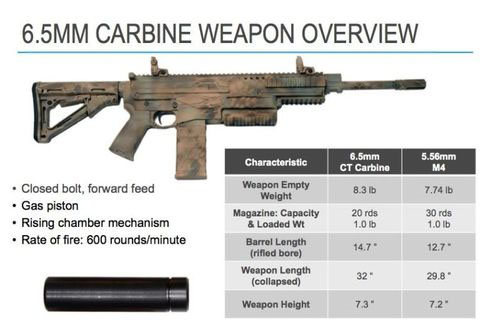 Does this mean the 6.5mm cartridge is useless for personal arms? Not necessarily. The 6.5mm cartridge is a replacement for 7.62mm caliber, and therefore useful for belt-fed weapons, snipers, and designated marksmen. It can also be useful for heavy infantry or urban combat specialist troops, while light infantry and grenadiers keep the lighter M4. The M16/M4 platform is an assault rifle, while the 6.5/7.62 platforms are closer to a battle rifle. Battle rifles are inherently designed to be employed differently than assault rifles, and neither can completely replace the other.

Nor is the 5.56x45 at any innate disadvantage in modern combat. In Afghanistan, many opportunities for accurate, mid-range, semi-automatic fire from M4s are missed due to poor marksmanship training, and the problem would repeat itself equally with a 6.5mm. Technology cannot compensate for poor training and substandard operation. As for body armor, the old slogan ‘Hips and Heads’ will still be viable, regardless of caliber. Civilian marksmanship training programs run by the NRA/gun clubs routinely produce far better shooters without spending exorbitant amounts of resources, as John Buol pointed out in his book ‘Beyond Expert: Tripling Military Shooting Skills,’ and the Army would be wise to prioritize updating its training before adopting a new rifle.

For a Designated Marksman/Heavy Infantryman’s rifle, the designers could take a page from the Johnson Rifle. As shown in the images below, the Johnson rifle had a 10-round rotary drum magazine that was fed by stripper clips. A modern rifle could improve the design by developing a 30-round drum, and by making it detachable. This way, 10-, 20-, or 30-round stripper clips could be used to speedily reload the rifle without requiring the user to carry multiple drum magazines, and the clips could be carried in standard holsters designed for more ergonomic box magazines. The drum magazine would have the secondary advantages of being short enough to allow prone firing, as well as allowing magazines to be topped off without requiring a full reload. 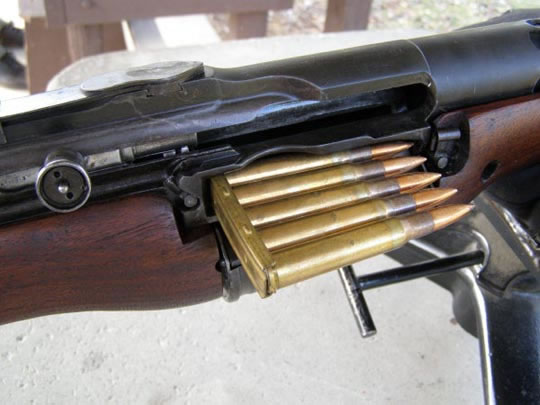 [i] The High-low Chamber pressure system was originally developed for antitank guns, but post-WWII has only been used in grenade launchers in combat.

[ii] These would not replace regular helmets, but would be limited to contaminated areas