Turkey and Iran continue in their historically based power play in the Caucasus and the Levant.  They are squeezing territory from Armenia via their proxy war by the Azeris in Nagorno-Karabakh and the presence of Azeri jihadists in neighboring Syria.

Posing as referees to these conflicts are the Russian Federation and the United States, both of whom have significant numbers of Armenians within their own borders. 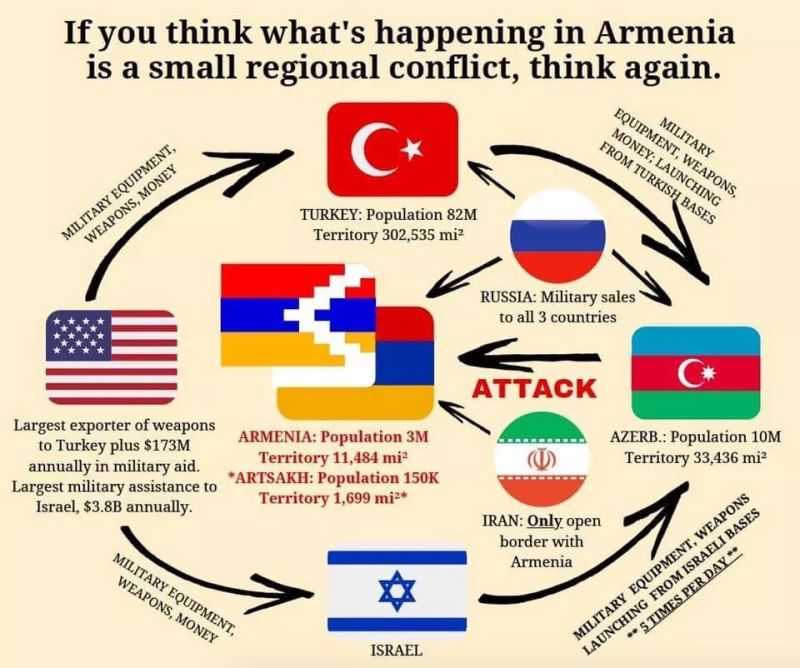 At different times both France and Albania in conjunction with the United States and Russia, have participated in possible peace negotiations while weapon sales to and from both countries continued even during the Organization for Security and Cooperation in Europe (OSCE) Minsk protocols to mediate cease fire agreements in 1997-1998 and in September 2020. President Emmanuel Macron of France said on Wednesday, September 28, that there was evidence that a proxy force of Syrian fighters had been deployed from southern Turkey to Azerbaijan. A Syrian fighter confirmed the presence of those forces, which Azerbaijan and Turkey have denied.

Moreover Armenia recalled its ambassador to Israel after Azerbaijan acknowledged using Israeli-made weapons to fight Armenian forces around Nagorno-Karabakh.  Azerbaijan maintained trade relations with Israel since its independence in 1991. Azerbaijan provides Israeli intelligence with information on Iran, making it difficult for Tel Aviv to abandon such an ally. Tel Aviv and Baku  seemingly share the same goal: to control Iranian Islamist propaganda and aggression.

There is a significant religious and ethnic element to these conflicts.   The Armenians and the Persians were both practicing Zoroastrians before the rise of Christianity and the emergence of Islam.  Armenia was the first nation to declare itself a Christian country in 300 AD.  Russia as an Orthodox Christian country aligned with Armenia while expanding its economic and diplomatic relationship with Iran.

Turkey is also a Muslim majority country.  The Turkish government claims 99.8% identify as Muslim and of these about 75% belong to the Hanafi and Maturidi Sunni branch of Islam, 6.5% belong to the Shafi’I and Ash’ari Sunni schools of Islam while Alevis, Ja’faris and Alawites belong to the Shia sect of Islam according to religious polls published in 2018.

Prior to the Syrian civil war, jihadist groups in Azerbaijan were primarily connected to the insurgency in the North Caucasus. A group called Tovba (“Repentance”) attempted to emphasize the religious factor in the Nagorno-Karabakh conflict during the 1988 protests in Baku.  However, there was a crackdown on Salafi and other political Islamic groups after the 2008 Abu Bakr mosque bombing in Azerbaijan.  This resulted in the departure of many jihadists from the area. These terrorists became the vanguard of Azerbaijani groups in Syria, initially holding high-level positions in foreign fighter ISIS/Daesh violent extremist networks.

The siege of Aleppo, Syria by Daesh/ISIS targeted and viciously attacked Christians living in those areas, the majority of whom were ethnic Armenians.

The political Islamic factions in Azerbaijan and Syria, were supported by both Iran and Turkey.  Turkey having a long history of aggression against Armenia including carving up Armenian territories as well as their genocidal actions against the Armenians in the early 20th century.

In addition, Turkey has significant trade agreements with Azerbaijan including the recently signed $7 billion-dollar natural gas pipeline project which will transport Azeri natural gas across Turkey to Europe.  President Erdogan of Turkey has continued to disregard sanctions by the United States against Iran and purchase their gas and oil, albeit at a reduced percentage.

As of the first week of October 2020, President Erdogan stated, “Turkey continues to stand with friendly and brotherly Azerbaijan with all its facilities and heart.”   The Azeris share a common Turkic language base and Turkish “nationalism” in northern Iran where a large Azeri Turkish population resides in Tabriz.  This concerns Iran since the idea of a “Greater Azerbaijan” is supported by the current President of Azerbaijan, llham Aliyvev.

Russia continues to have a military presence and a military base in Armenia, however while Russia supplies arms to Armenia it also sells weapons to Azerbaijan.

The United States provides millions of dollars in various aid packages to Azerbaijan.  Azerbaijan grants over-flight rights and approved numerous landings and refueling operations at Baku’s civilian airport in support of U.S. and coalition military operations in Afghanistan. Azerbaijan is a major land, air, and sea conduit of the Northern Distribution Network for supplies entering and leaving Afghanistan to support U.S. and International Security Assistance Force (ISAF) stabilization operations. Azerbaijan has contributed troops for the ISAF since 2003. From 2003 to 2008, about 150 Azerbaijani troops participated in the coalition stabilization force for Iraq.

Armenia established diplomatic and trade relations with the United States in 1992.  Modest aid is supplied through programs run by USAID, the US State Department and numerous Armenian/American NGOs and church sponsored organizations.

Armenia and Iran have continued trade and according to recent reports, “Iran’s traditional Armenia policy has long been a balancing act against both Azerbaijan and Turkey across southern Caucasia. As a result, behind-the-scenes, Iran backs Armenia.”

Armenia has maintained positive diplomatic, economic and security relationships with Russia since the fall of the Soviet Union.

Armenia and Turkey are hostile neighbors.  They have not formally established diplomatic nor economic relationships.  They dispute the borders and do not recognize the brief normalization protocols of 2008-2009.  The protocols were formally annulled in March 2018.

Turkey under President Erdogan openly supports Azerbaijan and its attacks against Armenia in the disputed Nagorno-Karabakh territory.  “Mr. Erdogan’s growing assertiveness has come partly in response to changing global dynamics, particularly the shrinking American role in the region, deep divisions within the European Union and the devastating civil war in Syria, just across Turkey’s southern border. He has at his disposal, a powerful military that Turkey has been upgrading for decades.”

Turkey has built up its military through its alliance with NATO and procuring weapons from the United States, France, the UK, Canada and Spain.   Turkey is also the world’s 14th largest weapons exporter as of 2018, with a robust, developed domestic arms producing industry.

Armenia will be pressed from all sides to cede to Azerbaijan in the upcoming negotiations.