The aftermath of Colombia’s long FARC insurgency has left a criminal power vacuum. The FARC (Fuerzas Armadas Revolucionarias de Colombia) relied upon coca production and the resulting profits to finance its insurgency and impose territorial control. The resulting narco-insurgency created links between the FARC insurgents and a number of criminal enterprises. The peace process following the termination of hostilities between the Colombian state and the FARC has left a void in the criminal economy. A number of gangs, including Brazilian gangs and Colombian BACRIM (bandas criminales emergentes), are filling that vacuum and recruiting former FARC guerillas. 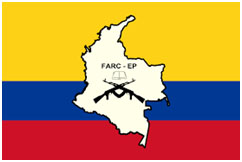 SÃO PAULO, Brazil—This country’s largest criminal organization is recruiting members of Colombia’s once-powerful rebel group as it seeks heavy-weapons and other expertise to help expand its hold over Latin America’s drug trade, investigators and officials in both countries say.

As the peace process moves forward, ending a half-century conflict, there is concern that disaffected FARC fighters—and their heavy weapons—could fall into the hands of powerful drug gangs such as the First Capital Command (PCC) in Brazil or the Gulf Clan in Colombia.

Colombian officials have already warned that the Gulf Clan is recruiting FARC renegades.

A report published by the official “Grupo de Monitoreo” (monitoring group) on the peace agreement between the Colombian government and FARC guerrillas warns of the intention of the Colombian Gaitanista Self-Defense Groups (AGC), an alliance between two criminal gangs known as “El Clan del Golfo” And “Clan Usuga,” to take control of the the Urabá area in Antioquia, a highly important coca-growing region, in order to expand cultivation, encourage desertion in the ranks of other armed groups, and become the overlords of the territories abandoned by the FARC…

The recruitment of former FARC guerillas by criminal gangs is a concern in Colombia and Brazil. Recently, intelligence and security officials in both nations have become troubled that out-of-work fighters are being recruited by criminal gangs, including the PCC (Primer Commando de la Capital) among others in Brazil and the Urabeños (Clan del Golfo or Autodefensas Gaitanistas de Colombia (AGC)) in Colombia. [1] 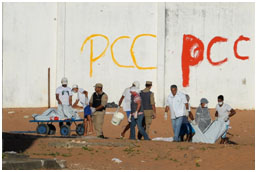 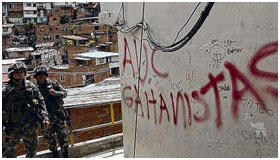 The power vacuum created by the Colombian peace process has resulted in criminal gangs replacing rebels in coca-growing regions.  In short, the gangsters are filling the void in the criminal political economy. [2] When the Marxist guerillas left, the criminal bands appeared.  In one Andean village, Pasculta, a new group of armed men—BACRIM from the Urabeños [3]—ordered villagers into a meeting and said that the FARC was gone and they were now in control.  In order to solidify its control, the Urabeños is offering former guerillas 1.8 million pesos ($600) to switch sides.  This is more than twice the disarmament bonus offered by the government. [4]

Other former fighters are being recruited by Brazilian gangsters—notably the PCC (First Capital Command/Primeiro Comando da Capital), a prison-street gang hybrid based in São Paulo with an estimated 21,000 members. The PCC is seeking to expand into Colombia and reinforce its own fighting skills by attracting seasoned fighters and military-grade weapons. This entails gaining a foothold in the growing coca trade (coca production is on the rise) and seizing direct control of lucrative smuggling routes while eliminating middlemen to enhance profits in Brazil’s drug market. [5] This is resulting in a state of instability in the criminal political economy; “The splintering of FARC forces coincides with a bloody realignment among the drug gangs running the roughly $4.5 billion cocaine trade in Brazil, the world’s biggest consumer after the United States, and funneling drugs to Europe.” [6]

This criminal opportunity space is leading to a realignment of Brazil’s gang underworld. The PCC and Red Command (Comando Vermelho) have abandoned a longstanding turf sharing agreement, substituting it with open warfare. The PCC’s rivals include the Terceiro Commando Puro (TCP), Comando Vermelho (CV), and Família do Norte (FDN) in addition to Brazil’s state and federal police and military. [7] The PCC has waged a violent and brutal war against its rivals both inside prison and out, instigating deadly prison riots [8] and attacking police, public buildings and mass transit to sustain their domination of Brazil’s favelas. [9]

The FARC demobilization is also illustrative of another component related to third generation gang (3GenGangs) analysis. This relates to the unexpected consequences of second and third order effects resulting from governmental policy decisions focused on the illicit economy, the gangs or related entities (such as the FARC in this instance), or the enactment and implementation of counter-gang programs.  While the intent of the initial governmental policy that was set into motion was to mitigate, or possibly even solve, some sort of social scourge such as localized drug trafficking or use, gang violence, or other forms of criminality that a 3GenGang may be involved with, it ultimately either shifted the problem to another venue, made the problem worse, or created an entirely new problem set which was not pre-existing.

This phenomenon was evident early on in Los Angeles when non-resident aliens belonging to the infamous Mara Salvatrucha (MS-13) and 18th Street gangs (who came to the United States as children) were deported to Central America in the late 1990s and early 2000s. Overall, some 46,000 criminal aliens from across the United States—thousands of whom had been LA gangbangers—were deported, mainly to El Salvador, Guatemala, and Honduras. [10] While the policy intent was to clean up the streets—specifically, removing gang members from the Rampart (Pico-Union) district of Los Angeles where MS-13 and 18th Street originated—the end result was to spread these two competing gangs into Central America.  As an outcome, these gangs took root, further expanded, became more violent, and even began to engage in transnational operations not only on the US West Coast and in Central America but also along the US East Coast (via later migrations from Central America) as well as spreading into Mexico.

Another initial example took place in Northern Mexico in the 1990s and concerns the fielding of a specialized commando force for use in the drug wars against the cartels. Later in that decade, a roughly platoon sized element of this force later in that decade went over to the Cártel del Golfo (CDG) to work as highly paid enforcers. [11] This cadre evolved into what later became known as the Los Zetas cartel. This new cartel, which possessed a number of 3GenGangs attributes, in turn expanded into much of Eastern Mexico and even into Central America, where it went on to directly influence and evolve some of the maras allied to them—including those whose origins can be directly traced back to Los Angeles from the initial second order effects example. [12]

Hence, in a similar fashion, the power vacuum created by the peace treaty between the Colombian government and the FARC has not only resulted in the unexpected filling of the criminal economic power void in the coca-growing regions of Colombia by the BACRIM but will also result in their increasing paramilitary sophistication due to the learning of new TTPs and insurgent skills from former FARC personnel who they have recruited.  Additionally, with regard to gangs such as the Urabeños (AGC), they will now have both urban and rural powerbases which allow them to conceivably not only distribute illicit narcotics but also to grow them. The increased wealth (and power) potentials of this BACRIM—along with competing ones—will likely result in their forced evolution into a more sophisticated type of 3GenGang. Hence, while an ideologically bankrupt Marxist insurgency in Colombia may be no more, the potentials for an expanded criminal insurgency (one that is solely profit driven but also promotes a violent gang culture) taking place in both the cities and the countryside has now greatly increased.

While the second order effects on Brazilian 3GenGangs may be less pronounced, a likely result is the PCC gaining new insurgent combat skills provided by the former FARC personnel they have now also hired. This could negatively impact the position of the Red Command whom they are now openly fighting.  As a result, the Red Command, in turn, would then be required to seek additional training assistance—or even additional infantry small arms—in what could become a ‘Brazilian slum paramilitary capabilities race’ as another unforeseen outcome of the FARC demobilization.

[7] Historically, the FARC maintained commercial alliances with the FDN, which may exacerbate tensions in both Brazil and Colombia as the PCC moves into that space.  See Leonardo Goi, “Brazil’s PCC is Recruiting FARC Dissidents: Colombia Defense Minister.” InSight Crime. 01 February 2017, http://www.insightcrime.org/news-briefs/brazil-pcc-recruiting-farc-dissidents-colombia-defense-minister.