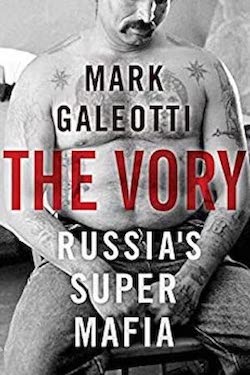 Dr. Mark Galeotti is a distinguished academic, security consultant, and UK governmental advisor. His most recent works are We Need to Talk About Putin (Ebury Press, 2019) and A Short History of Russia (Hanover, 2022). He is well known for his expertise on Russia and its criminal networks and combines his knowledge of Russian history and Russian crime to provide a seminal work on the confluence of the two. In The Vory: Russia’s Super Mafia published a few years ago, he does precisely that, providing an intriguing history of Russian organized crime—the vory v zakone (vory)— and describing its modern existence and consequence. The work has been so successful that it has been or is in the process of being translated into sixteen languages.

In less than 300 pages of well-written and easily digestible writing, Galeotti lays out the history of Russian crime in broad strokes. The book is structured in four parts entitled Foundations, Emergence, Varieties, and Futures, respectively. Foundations considers the inception of Russian crime and Russian attitudes towards policing, and continues through to the end of the Stalinist era. It describes the formation of a criminal culture within the gulag system and the “bitches war,” between newer-age criminals willing to collaborate with authorities and traditionalists who were not. The second part, Emergence, covers the criminals’ origin in the Gulag system and involvement in the growing informal economy. It also details the impact of Gorbachev’s leadership and the vast opportunities his anti-alcohol prohibition and economic privatization created for organized crime. The penultimate section, Varieties, discusses the structure of Russian gangs and the gangsters of post-Soviet states, such as Chechnya and Georgia, as well as the Russian gangsters’ relationships with their contemporaries in China and Japan. The final section, Futures, considers the vory in a more modern sense, and how the outsider nature of the vory has dissolved, with society as a whole adopting the criminality previously reserved for the vory. The weaponization of criminal organizations by the Kremlin in the annexation of Crimea and the Donbas region is also covered. Lastly, the mainstream adoption of criminality and the new means to carry out crime are discussed, as are a few means to combat this from of criminality.

The book as a whole doesn’t put forth an academic hypothesis but is rather largely descriptive in nature given its mass market focus. There are, however, a number of smaller arguments or themes that can be found within the text. Perhaps the most relevant of these is that of the criminalization of Russian society as a whole. In Chapter 16, Galeotti lays out his argument surrounding the nationalization of the underworld and the gangsterization of the formal sector. Within this framework, the criminal has often risen to the place of “legitimate” businessman or politician. This legitimate status, however, is contingent on their constant loyalty to the state or their illegitimate dealings will be used against them. When gangsters rise to powerful roles in the formal sector, gangsterization is inevitable. This is mainly manifest in the Kremlin’s willingness to turn towards tactics traditionally reserved for criminal organizations in order to further its goals, such as contract killings or extortion. This framework, describing a fusion of the autocratic, plutocratic, and criminal elements in Russian society into one joint force constricting and exploiting the people of Russia, contains a relevance that transcends Russia.

Galeotti manages to fit a long, complicated history into a short, readable, and enjoyable book. The book strikes a respectable balance between the educational and entertaining, containing stories of the exploits and tales of famous Russian gangsters, as well as having sufficient discussion of the conditions that made those exploits and tales a possibility. It is also an exceptionally relevant book for understanding not just Russian organized crime, but the ways in which crime has merged into Russian society and politics, which is essential to developing an understanding of the structure of contemporary Russia. In a genre that can be overrun with sensationalism, Galeotti delivers a grounded and important take on Russian crime and society that bears contemporary relevance and provides context for many of the actions of Russia and its oligarchs in the past year.

In his attempt to cover the totality of Russian crime, Galeotti sometimes loses detail, a loss that can leave the reader wanting more. He often falls into a pattern in which he introduces the beginning of an anecdote, but doesn’t play it out to a satisfactory extent. The most striking example of this was in Chapter 10, “The Chechen,” in which Galeotti begins the chapter by describing his meeting with one of the most renowned Chechen contract killers of Moscow. Galeotti describes him as a natural storyteller who told of exploits that seemed almost unbelievable yet doesn’t divulge any of these seemingly fascinating stories. Although much of this is the result of the scope of the book, it can sometimes leave a reader unsatisfied. This is also not the book to turn to for a reader in search of policy proposals to combat Russian crime. In Chapter 16, Galeotti briefly offers suggestions for dealing with international Russian crime, suggesting caution and a more critical eye for financial institutions that have previously accepted Russian money. Galeotti is offering a description of Russian crime, not a handbook for dealing with it, but the description provided is still a necessary prerequisite, maintaining the relevance of this book for those seeking to understand and tackle Russian crime.

Within The Vory, Mark Galeotti blends information and reading pleasure, delivering a book that is both important and a page-turner. It is essential for understanding the current Russian political system, and the criminality, previously reserved for those in the Gulags, that now runs through the veins of the Kremlin. The main shortcomings of the book are largely due to the breadth of information covered in only so many pages—though this does not take away from the overall value of the book. Galeotti provides an intriguing and worrying picture of Russian power, and The Vory is essential for anyone seeking to understand this power dynamic and prevent that same power dynamic from taking hold elsewhere.

Kevin Hammill is a sophomore majoring in Political Science and Psychology at Fordham University, New York City and is in the Fordham Debate Society. He is an International Baccalaureate Diploma graduate who was active in Model United Nations and a past marketing intern with TurnUp Activism. He is presently an intern with C/O Futures, LLC, focusing on the activities and influence of Russian oligarchs in London and also their interrelationship with plutocratic insurgency, criminality, and authoritarianism.

A Note to the Fresh Meat on…

A Note to the Fresh Meat on Campus

The Backlash Against Hooking Up – Is it Real?

The “Sex as Empowerment” Scam

Manwhores: For Casual Sex Only

How to Make a Happy Husband, or a Husband Happy

Beta Male of the Week

10 Reasons to Date a Beta Male

This is a great book! I'm so glad I got her. I was so impressed with it that I gave it to 2 of my friends. Also wrote a term paper on it.

Very cool book, after it I…

Very cool book, after it I left a lot of impressions. These are the kind of books I crave. I also once wrote about human trafficking, I used https://edubirdie.com/examples/human-trafficking/ for this. When they sent me the work, I re-read it 20 times. It was so interesting that you can't tell it. I just love everything to do with the mafia.