The protection and security of the United States borders is a contentious topic that often leads to truculent discussions among constituents, politicians, and policymakers. Despite the attention given to this issue, there is a growing threat towards national security well beyond the geographic borders of the north and south of the United States. Further advancement of globalization has allowed criminal organizations throughout the world to increase the affluence and expertise of their organizational networks. The trafficking of illegal drugs and the precursor chemicals used for making those drugs is often considered a national security threat for many developed and resource-limited nations. This essay briefly examines the evolving affiliation between Chinese triads and Mexican criminal enterprises in regards to distributing and manufacturing illegal drugs, specifically methamphetamine (e.g. crystal meth, ice, crank). 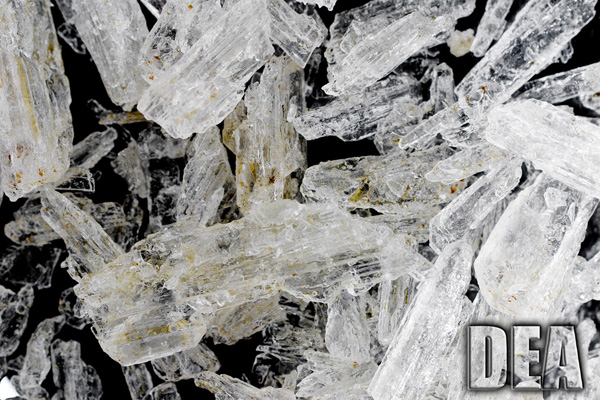 This illicit narcotic is a highly addictive stimulant with strong psychological effects including psychosis and violent behaviors. Image source: http://www.dea.gov/pr/multimedia-library/image-gallery/meth/meth-10.jpg 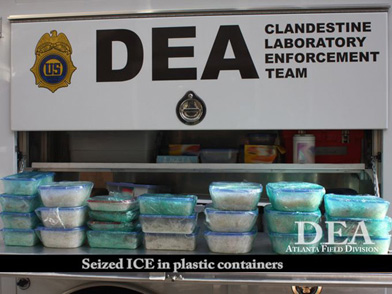 Transnational criminal enterprises are now forging alliances in order to improve the efficiency and effectiveness of their operation with the intention of increasing income, influence, and power for their organization. Chinese triads are influential criminal enterprises in East Asia and are establishing significant coalitions with criminal enterprises throughout the world, and in Mexico in particular. These triads are considered the organizers of the illicit proclivities with the Mexican criminal organizations. The unstable government structures and some of the corrupt government officials in China and Mexico allow flexibility among the criminal enterprises with trafficking drugs into the United States and throughout the global community. Globalization has led the international community to be more intricate and interconnected; therefore the responsibility of responding to transnational crimes has shifted from isolated local predicaments to the multinational arena.

The Impact of Globalization on Illicit Drug Activities

The dynamic and changing competitive market structure was intended to encourage more freedom in trade, to bridge economic inequality, integrate consumer products, and to facilitate the sharing of ideas. However, these aspirations have also expanded the proficiency of transnational criminal enterprises in committing nefarious crimes. Even though some forces of globalization may have noble intentions to bridge economic inequality around the world, there are scholars who argue that globalization has inadvertently allowed the flourishing of illegal activities among transnational criminal organizations (Bartilow & Eom, 2009; Clarke, 2008; Maftei, 2012; Storti & De Grauwe, 2009).

Public officials are often at a crossroads between the need for economic development and the task of controlling illicit drug activities, which has become more burdensome since the world economy is no longer as restricted as it was even a few decades ago. The integration of different economic markets provides organized criminal enterprises with the ability to operate in a clandestine and effective manner. Government institutions have increased public expenditures and law enforcement programs in order to combat drug consumption, but most nations have seen minimal success because transnational criminal organizations are able to circumvent legal interventions (Bunker & Sullivan, 1998; Jenner, 2011).

Drugs have a lasting impact on a nation’s population and institutional development. The operations and illegitimate authorities of transnational criminal organizations are capable of defying and destroying the validity, legitimacy, and affluence of a nation. In particular, illicit drugs may threaten the youth population, endanger the productivity level of a nation, lead to sexual exploitation, increase health-related problems, and instigate violent crimes (Shelley, 2012; Singer, 2008). When drug usage among the normally productive adult population is rampant, this can lead to problems related to a nation’s economy, environment, security, sustainability, and social welfare.

The manufacturing, smuggling, and trafficking of illegal drugs involves intricate coordination from the criminal organizations in order to avoid and outmaneuver law enforcement officials. The criminal enterprises plan using established transportation routes and networks to maximize the efficiency of their operations. The lower cost for transportation, increase in international trading, effects of urbanization, and increase in tourism allows drug traffickers to find creative ways to transport illegal drugs across borders (Bartilow & Eom, 2009; Clarke, 2008; Storti & De Grauwe, 2009). Illegal drugs may be concealed in shipping cargos for example, and drug traffickers disguised as international tourists may be able to hide illicit drugs in luggage or in body cavities. The lowering of transport costs and the development of new information technology improves the ability of drug traffickers to distribute illicit drugs. Information technology and communication infrastructures allow communication between transnational criminal organizations to communicate more effectively and to transfer monetary payment instantaneously.

The Reciprocal Relationship Between China and Mexico

Chinese triads are unlawful criminal enterprises that are often connected with violent crimes and corruption, mainly in China, though they also have noxious influences in major metropolises overseas. Chinese triads in their modern form have existed since the seventeenth century and have been proficient at adapting to changing political and economic environments in China and abroad. These triads have a flourishing influence that extends beyond the borders of China. Segments of Chinese triads have been found in Argentina, Australia, Canada, Mexico, Netherlands, New Zealand, Panama, Peru, United Kingdom, United States, and Venezuela (Chu, 2005; Ellis, 2012; Lee, Broadhurst, & Beh, 2006). The largest and most prominent Chinese triads are the 14K, Sun Yee On, Wo Hop, and Wo Shing Wo (Broadhurst & Wa, 2009; Chu, 2005; Lo, 2010).

Law enforcement authorities in China and Mexico have acknowledged the existence of the developing relationship between the Chinese and Mexican criminal enterprises (Ellis, 2012). The Chinese triads have been the fundamental supplier of precursor chemicals, such as ephedrine and pseudoephedrine, used by Mexican criminal organizations for the production of methamphetamine. While the regulations of precursor ingredients in the United States and Mexico have become more stringent and rigorous, Mexican criminal organizations are still able to obtain mass amounts of precursor materials by exploiting the regulatory deficiencies in the People’s Republic of China. Chinese triads are now becoming the preeminent supplier of precursor chemicals to Mexican criminal enterprises (Ellis, 2012; Harris, 2014; Keefe, 2012; UNODC, 2015).

The lax enforcement by Chinese government officials and imprecise policies regarding the regulation of the manufacture and export of precursor chemicals has helped maintain the collaboration between Chinese triads and Mexican criminal enterprises. Once Mexican criminal enterprises receive the precursor chemicals used for making methamphetamine, they produce the methamphetamine and export the final product to the United States and other nations. According to the United States Drug Enforcement Administration, approximately 90 percent of the methamphetamines used in the United States were produced in Mexico, with the bulk of the precursor chemicals and ingredients stemming from China (DEA, 2015). Methamphetamine is one of the most addictive forms of illicit narcotics to exist and has been a scourge to many communities across the United States including numerous rural communities throughout the mid-West and in many other lower socio-economic regions of the nation. Users of this illicit narcotic literally physically waste away during prolonged use resulting in skin sores and ‘meth mouth’ aliments manifesting themselves. 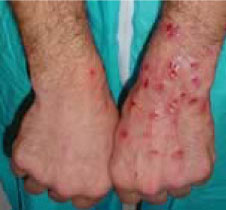 Meth use often creates the sensation of insects inside the skin. The hallucination causes meth users to scratch their skin which often leads to infected sores. 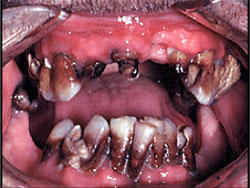 Classic image of ‘Meth mouth’ due to prolonged use.

Mexican government officials’ repeated insistence that the Chinese government restrict the exportation of precursor chemicals has failed to make an impact. Chinese government officials remain intransigent, continuing to demonstrate a lack of interest in tightening relevant restrictions. In fact, government collusion by means of corrupt officials and even communist party policies has resulted in allegations that the activity of the triads has varying levels of tacit Chinese state approval (Phillip, 2014; Phillip, 2015).

Table 1. The Annual Methamphetamine Seizures in the United States and China (Kilograms)

Figure 1. The Annual Methamphetamine Seizures in the United States and China (Kilograms) 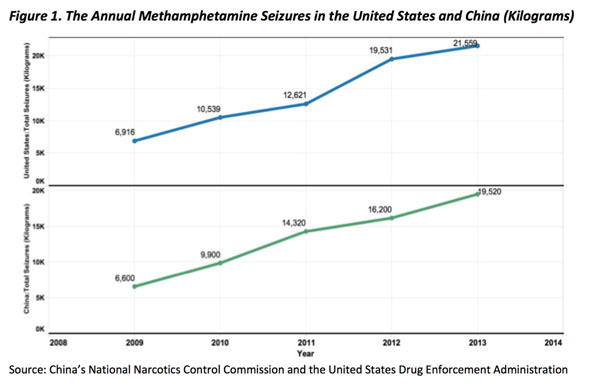 While there continues to be an increase in the amount of methamphetamine confiscated in the United States and China, there is a lack of a distinguishable association between this trend and the advancing partnership between Chinese triads and Mexican criminal enterprises. This analysis merely illustrates the prevalence of this epidemic and the crucial need for nations to collaborate and address this policy dilemma. The partnership between the Chinese triads and Mexican criminal organizations will only make the policy challenge confronting government and law enforcement officials more complex.

The violence and problems stemming from illicit drugs activities are found in both resource-limited and developed nations. Despite the drastic increase in funding to combat these incidents, illegal drugs continue to be a systemic problem. Illegal activities are now becoming a transnational issue and enforcement involves multinational collaboration and enforcement. Any developed and resource-limited nation is susceptible and vulnerable to the consequences of drug trafficking.

As the prevalence of drug trafficking activities reaches international proportions, a number of scholars have persuasively argued that drug trafficking is becoming a serious social and political issue for the global community (Dupont, 1999). Revolutionary political movement and insurgent groups may utilize transnational drug trafficking in order to finance their operations, which threatens institutional stability. The increase of drug incidents also poses a threat to the stability of a nation. Understanding the factors that may lead to an increase in drug activities is pertinent because the information may assist government officials and stakeholders on how to formulate public policies to adapt to evolving and transforming global dynamics.

Singer, M. (2008). Drugs and development: The global impact of drug use and trafficking on social and economic development. The International Journal on Drug Policy, 19(6), 467 478.