Given the available information, I conclude that Iraq was in a state of near collapse prior to the American Invasion.  Our prolonged occupation only further exasperated the ethnic, sectarian, tribal, and religious tensions, and the forecast is that Iraq will head into civil war.  But, the Iraqis must be left to determine their own path to peace without further intervention.  At most, we can contain the violence by blocking the borders, but we should not pick a winner in this fight.

This is just one assessment for consideration to be examined for accuracy.  It is by no means the truth, but it is important to explore this hypothesis.  This is part of a much larger on-going work, but given the urgency of today, I felt it necessary to share my initial findings.

The logic and method of design outlined in this paper is first and foremost a collective research methodology for considering the best available information to make sense of what is known in order to construct an explicit and shared hypothesis of the very unique, dynamic and complex power and influence networks that pertain to the mission and how to act through them to take best advantage of the inherent situational potential for change. It is also a collective methodology for continually refining the command's understanding of them, and for facilitating collective adaptation accordingly.

3. Culture is Irrelevant.  Cultural Anthropology is only one study within the field.  There are many others with opposing viewpoints.  Conflict and Social Anthropology look at societies in broader terms such as mountain people, country folks, and city folks.  Mountain people like to fight!  Also, we must better understand the importance of religion when trying to control hearts, minds, and souls.

4. Understanding the Difference between Urban versus Rural Insurgency is a critical component of small wars.  When people move to big cities like Baghdad, they discard or leave behind their roots (Values, Tribes, Family) over time in order to modernize(Country boy to Urban Tweeting Hipster).  Thus, any messaging or interaction from them should be viewed discerningly to understand motives, and we should be wary of what political incitives they have for supporting our efforts.

5.  The Sunnis will not let go of power without a fight.

6.  Oil Ownership is irrelevant until the fight is complete.

Model: Small Wars and the Theory of Games 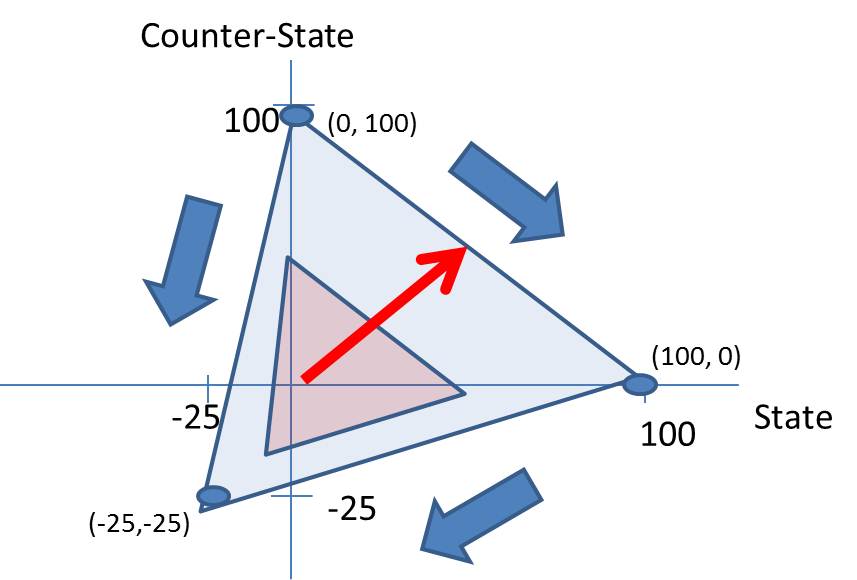 In the mid 1990’s, Saddam barely managed to contain his internal security threats, and Iraq was deteriorating rapidly due to the cumulative effects of the Iran-Iraq war, the invasion of Kuwait and subsequent American intervention, global economic restrictions, and military containment strategy.  In 2003, we just failed to understand Iraq or perhaps we overestimated our own abilities.

Saddam ruled by layer upon layer of Soviet and Nazi styled heavy-handed suppression and pacification.  In the most nihilistic fashion, uneducated and violent fighters were recruited out of the Diyala River Valley to serve in the Fedayeen, Saddam’s version of Hitler’s Schutzstaffel or Stalin’s secret police.  Saddam’s government was built on a house of sand, and it was only a matter of time before it collapsed.

In eastern Diyala province, The Council, a Sunni based Wahhabi separatist movement not affiliated with Al-Qaida, were mobilizing, recruiting, and training a shadow government/counter-state essentially carving out a semi-autonomous region.  Coupled with the Kurdish resistance in the North and competing Shia factions in the South, groups like The Council would have eventual forced an Iraqi revolution.

Groups like The Council will now provoke new tensions in Iraq with the American withdrawal.  This crisis will start in Diyala province, the center of gravity for the Sunni Resistance in Iraq, nested along the old Silk Road.  While the Iraq Surge suppressed their efforts, The Council merely withdrew to the countryside to regroup, refit, and prepare for the long war.

Instead, Iraq faced nearly a decade of bloody occupation and will have to overcome the physical, mental, and emotional tolls that are the secondary and tertiary effects of current U.S. foreign policy.  Specifically, today, over 600,000 Iraqis are externally displaced, an unknown number internally displaced, at least 100,000 killed, another 1,000,000 wounded, and millions of young men and women have grown up knowing only war.

Our efforts at treating a “gunshot wound” as prescribed by General David Petraeus’ Field Manual 3-24 Counterinsurgency only prolonged the suffering and missed the cancer.

Provoked by decades by Saddam, the initial invasion for regime change was justified, but our continued intervention only made Iraq worse.  The Iraqis must find their own way.

Very thought provoking...
I think there are several flaws with the assumptions and perhaps one that is missing: If you define culture as any set of variables that a group of people uses to create an identity, then you would conclude that culture does matter. One could argue that there is such a thing as a mountain culture - whether Appalachian or Afghani. The statement that the Sunnis will not let go of power needs to be qualified. Many of the Sunnis had NO real power when power is defined as the power over outcomes during Saddam's reign. I regularly engaged with top Sunni leadership willing to share power; however, I concur that they will not submit to a Shia dictatorship. The Sunnis are relatively rational people, yet do not tolerate hypocrisy well. I think if Tariq Hashemi received his arrest warrant concurrently to one issued for Bayan Jabr, then they would have been more accepting of it. I am not ready to jump on the people are people bandwagon either. While our history is full of examples of reprehensible behavior, it is the exception vice the norm. I am not aware of any US equivalent of the terror architecture that existed in the Soviet Union from 1922 to 1954, nor am I aware of any Einsatzgruppen-like forces or Cultural Revolution cadres in our past. While we all may have the ability to do the unthinkable, I think socialization, institutionalization, and context are more important than human nature. With this in mind, I think you should add an assumption to your list that states - context matters. Just my two cents.

In some aspects Mike is totally right---there were a number of Sunni Salafi leaders based in Baghdad in the late 90s early 2000s who were very active in setting up resistance cells to Saddam-we just did not know about them.

When we arrived they flipped from resistance to Saddam to the resistance of us--that is the single most correct explanation of just how the Sunni insurgency went from exisiting as resistence cells in 2001/2002 to a full blown phase two guerrila war between Apr 2003 and Feb 2004.

We never saw it coming until late mid 2005 early 2006---we recognized the characteristics of the phase two we just never understood how they got there.

I'm gonna think about this line a lot, "I conclude that Iraq was in a state of near collapse prior to the American Invasion." Considering the similarities between Iraq and say, Libya or Egypt--dictators, poor populations--that might be the case, and America acted as the spark.

Also, we'll give this a shout out next week when we do the update because of the second bullet point in assumptions.