Various leaders of Mexican criminal organizations have been killed, jailed, and/or extradited since 2007. Their activities alone did not cause the explosion of violence, nor has the violence diminished significantly with these people being dead, in jail or extradited.  Is El Chapo really as important/powerful/controlling as he is portrayed in the media?   I don’t know the answer to that, but considering how long he has been around, both in jail and out, I don't see any significant changes in the overall level of violence in Mexico based on whether or not he is in or out of jail.

The violence exploded in 2007, shortly after Felipe Calderón sent thousands of military troops and federal police forces into the towns and cities of Mexico.  Consider that this militarization of the so-called "drug war" caused the huge increase and continuation of violence, not the killing, capture and/or extradition of the various criminal kingpins.

Some scholars [2] have looked for correlations between presence of the military and increasing violence as measured by homicides.  And they find them, especially in the case of the hyper-violence that occurred in Ciudad Juárez from 2008-2012. It is also worth noting that at least seven execution-style murders have already occurred in the first seven days of May 2016. The overall numbers of murders in Juárez are greatly diminished, but the violence continues at the rate of slightly more than one murder per day in the city.

Did the Military Interventions in the Mexican Drug War Increase Violence? [3]

This question is common and unresolved when discussing the Mexican drug war.

It is not so simple as to believe that militarization is the singular cause of the violence. We have to look at general social and economic conditions, perhaps most significantly the social upheavals, population movements and even armed rebellions that came after the huge economic and political changes spurred by implementation of the NAFTA in 1994. In Table 1 and table 2 (below), it is interesting to look at the high number of homicides during the Salinas sexenio. In terms of population growth since, it was probably almost as violent as Calderón's term.

It is also necessary to consider what will be revealed (or not) if Guzmán faces trial in federal court in the United States. Other high level traffickers who have been brought to the U.S. have made plea deals rather than go through a full trial. It is doubtful that either the U.S. or the Mexican governments have an interest in full disclosure of recent “arrangements” with the Sinaloa Cartel. [4]

As reported in The Guardian, “The young Mexican drug lord Jesus Vicente Zambada Niebla made headlines three years ago when he claimed the United States government had protected his father's drug cartel in return for providing information against rival cartel members. Now, with the revelation this week that Zambada's legal team and the US attorney's office signed a secret plea agreement a year ago, he has struck a deal of his own.” [5][6]  Zambada the son of “El Mayo” Zambada (Ismael Zambada García), El Chapo’s partner in the leadership of the Sinaloa cartel.  The following quotes provide insight into his “arrangements” with U.S. prosecutors:

The Statistics on Violence

Below is a summary of the data available on homicides in Mexico from official sources. For a more detailed look behind these numbers see: The Mexican Undead: Toward a New History of the “Drug War” Killing Fields. [10] 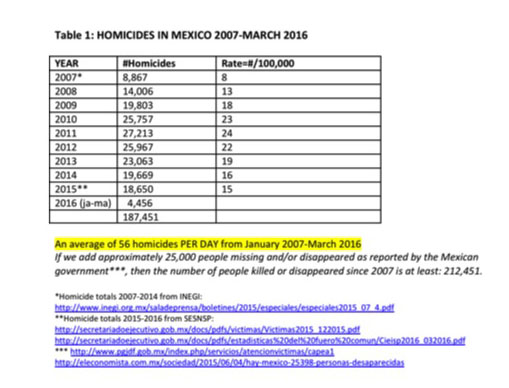 If we add approximately 25,000 people missing and/or disappeared as reported by the Mexican government***, then the number of people killed or disappeared since 2007 is at least: 212,451.

Homicides have gone down slightly during the first three years of Enrique Peña Nieto’s sexenio, but the average # of homicides PER DAY still stands at about 56—the number for all 6 years of Calderón’s term. And that number was DOUBLE the number of homicides per day during the sexenio of Vicente Fox.

Editor’s note:  At this time the extradition of El Chapo (Joaquín Guzmán Loera) remains a future potential.  There is significant pressure from US authorities for extradition.  While a Mexican judge cleared El Chapo for extradition his lawyers have appealed that ruling and several procedural steps, including approval by Mexico’s Foreign Ministry remain. Guzmán was recently moved from Altiplano prison to Cefereso No. 9, a prison on the outskirts of Cd. Juárez.