Note— This incident is extremely fragmentary and a minor footnote to a larger report by Borderland Beat. Five pictures of recovered weapons, ammunition in plastic bags, and license plates were posted along with the key information. What is significant, however, are the recovered machine guns that appeared in one of the photos.

On Monday the Mexican Army announced the seizure of weapons and vehicles in the municipality of Ixtlan del Rio, Nayarit.

A total of 14 rifles and automatic weapons, 5 handguns, 2 grenade launchers, tactical equipment, 2,573 rounds of ammunition and 3 vehicles, one of which was armored, were secured.

No arrests were announced by the Army.

Who:  Unknown cartel or drug gang. Criminal enforcer units operating in the vicinity of the Nayarit plaza are though to include those belonging to the Sinaloa cartel, Beltran Leyva loyalists, and Los Zetas.

What:  Weapons and vehicle seizure by the Mexican Army. 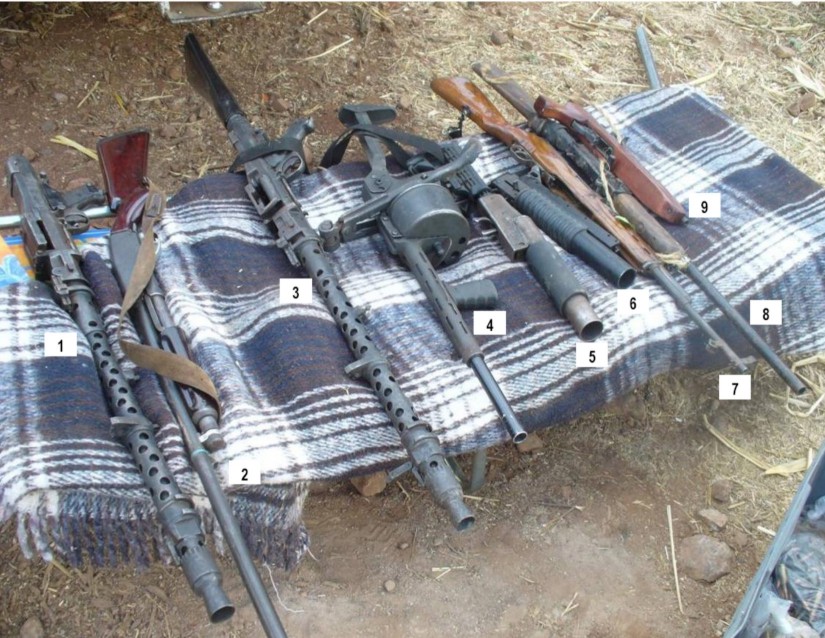 Note: The MG 34 Machine guns appearing in action in this location in January 2012 are extremely unusual.  The MG-34 was originally produced by three companies in both Germany and Austria during WWII for use by German troops.  The last ones that were observed in any known conflict appeared in Lebanon in 1975 – 1976 and were utilized by Hezbollah fighters.  The MG 34 has a very high cyclic rate; 900 rpm.  At this rate of fire, untrained personnel will expend their ammunition quickly.  This may, in fact, be evident by the absence of linked ammunition present at the time that the weapons were recovered.

Even though most of these are junk weapons and not indicative of the more modern equipped cartels, the ad-hoc nature indicates that as the Civil War in Mexico continues, different groups, cut off from their supply lines are having to be creative to arm themselves. This also means the fighting will continue to spread as more and more ingenious ways of fashioning weapons works its way through communities seeking to defend themselves or go on the offensive. This Civil War will not end for years and the violence is so entrenched in the society that the sociological damage it has done to the psyche of the Mexican people will take decades to overcome.

"I should have indicated that Item No. 6 is an M203 "style" launcher. Many
of the U.S. companies that produce 37mm launchers, also file for licensing
to produce the identical format in 40mm. This could be a 37mm launcher, but
would have limited the user to either pyrotechnics or gas (riot agents);
unless improvised explosive rounds were constructed. It is not clear why
the cartels would go to such trouble, as all present seizures to date have
indicated that they are not at all short on military 40mm HE / HEDP rounds.
Based upon the quality of the photograph, it was also not possible to
determine if rifling is present within the tube that would have delineated
the two."