Erdogan Warns Moscow on Idlib Amid Fears of Refugee Exodus

Erdogan Warns Moscow on Idlib Amid Fears of Refugee Exodus 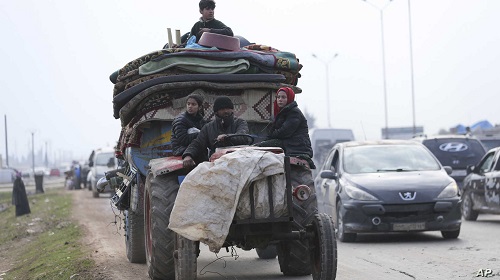 Turkish President Recep Tayyip Erdogan issued a rare warning to Moscow to rein in the Syrian government's Idlib offensive. The capture of a critical town Wednesday by regime forces is stoking fears in Ankara of a new exodus of refugees into Turkey.

Erdogan, returning from a three-day tour of Africa, accused Moscow of reneging on agreements on Syria and issued an ultimatum.

"We have waited until now, but from this point, we are going to take our own action. This is not a threat, but our expectation is that Russia will give the regime the necessary warning," said Erdogan.

The warning came as Syrian government forces captured the rebel-held town of Marat al-Numan. The government offensive, backed by Russian air power, is advancing deeper into Idlib province, the last bastion of rebel forces and home to 3 million people.

Erdogan claims the offensive violates last year's agreement, hammered out with Moscow to protect the province. But Moscow insists the attack is targeting only terrorists, which the deal allows.

"Russia tells us they fight against terrorism. Who are terrorists? The people fighting to defend their own lands?" Erdogan said Wednesday, dismissing Moscow claims.

Underlining Ankara's stance, a large convoy of Turkish forces entered Idlib on Tuesday to reinforce its military presence. Under an agreement with Moscow, Turkey has 12 observation posts to monitor a de-escalation zone aimed at preventing hostilities between the rebels and Syrian forces.

"Without the Russian air force, Turkey could easily take out the Assad forces," said analyst Atilla Yesilada of Global Source Partners. "They don't have the stamina or forces to resist a well-armed and trained army backed by the Syrian militia."

Experts warn Turkish forces in Syria are vulnerable, however, given the lack of air support, with Russian anti-aircraft missiles controlling Syrian airspace.

Ankara also has memories of the economic pain Moscow inflicted on Turkey through sanctions, following the 2015 downing of a Russian bomber by a Turkish fighter jet.

"Turkey is stuck; this is the problem. Russia is the key for Turkey to resolving Syria because Ankara can't risk a military confrontation," said international relations professor Huseyin Bagci of Ankara's Middle East Technical University.

"But I think Putin and Erdogan's interpretations of interests are differing more than before, and it's not a good development [for Ankara]."

While Ankara and Moscow back rival sides in the Syrian civil war, they have been working together to resolve the conflict — a cooperation that is providing the basis of a deeper rapprochement between the countries.

Analysts suggest that, given the alarm in NATO of Turkey's deepening ties with Russia, Moscow has a powerful incentive for containing bilateral tensions.

"The different approaches towards the regime of [Syrian President Bashar al-] Assad of Moscow and Ankara is a real challenge," said Zaur Gasimov, a Russian expert at the University of Bonn. "But due to certain dynamics in the region of the Middle East, the importance of intensive cooperation between Russia and Turkey is still much more important than any sort of confrontation for Moscow."

Moscow appears to be trying to play down tensions over Idlib.

"Russia is committed to the strict implementation of its obligations undertaken in Syria," said a Russian foreign ministry statement Wednesday in reaction to Erdogan's criticisms.

However, the fate of the rebel-held city of Idlib is seen as a red line for Ankara.

"My impression is that he [Assad] wants to lay siege to Idlib city, and that's where the real headache starts for Ankara," said Yesilada. "Because there are already a half-million refugees huddled on our border, and if Idlib comes under attack, another half-million goes to border."

Turkey has been hosting more than 3.5 million Syrians, with its "open-door policy" to those seeking refuge from the civil war. But Erdogan is warning his country cannot take any more refugees.

Ankara claims the cost of hosting Syrians is more than $40 billion. Mounting public discontent is cited as the driver behind the defeats suffered by Erdogan's AKP in last year's local elections. The prospect of a new exodus from Idlib could be politically fatal for the Turkish president.

"All the polls show a deep distaste for Syrians, given the economic difficulties in Turkey," said Yesilada. "They drive the wages down; there are social problems. If you take another half-a-million refugees in or try to feed them across the border in Syria, it's going to be a major blow to Erdogan's popularity, which is already sinking, because his open-door policy has completely backfired."

At this month's opening ceremony in Istanbul of a new Russian natural gas pipeline, Erdogan described Russian relations as "strategic." But the deepening crisis in Idlib is likely to add to increasing questions over the price of that relationship.

"Turkey needs Russia desperately in Syria. Without Russian cooperation, Idlib cannot be solved. But this relationship is not one of equals. There is a significant imbalance, the more this goes on, the more the question can be asked what is Turkey getting out of this," said Turkish analyst Mehmet Ogutcu of the London Energy Club.