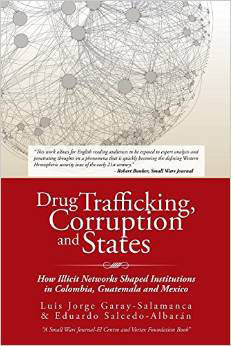 Drug Trafficking, Corruption and States is cutting edge research. Garay Salamanca and Salcedo-Albarán, along with their contributing authors help document the transition from economic to political imperatives within transnational drug cartels. The break from the Zetas by La Familia Michoacana is one example contained in their empirical survey. Social Network Analysis is their tool for illuminating the varying dynamics of cartel-state inter-penetration and reconfiguration. In doing so they clearly discern between State Capture (StC) and Co-opted State Reconfiguration (CStR). As the drug wars and criminal insurgencies rage in the Americas and beyond, this seminal framework will facilitate efforts by scholars, law enforcement officials, intelligence analysts and policymakers to understand shifts in sovereignty, and to illuminate the mechanisms of transnational illicit networks and their interaction with the state.