During the American Civil War, the Confederacy pioneered the anti-rail landmine. The basic concept is no different than a modern landmine: a passing train activates a pressure-sensor and triggers an explosive.[1] During the war, anti-rail landmines destroyed two heavily-laden trains headed to Tennessee, spurring the creation of the first mine-clearing roller.[2]

Skip ahead 150 years to today. The war in the Ukraine is a stark reminder of the criticality of logistics, and particularly trains. For all the technological wonders of the past century from flight to computers and artificial intelligence, old-fashioned trains remain a highly effective means to transport large amounts of food, fuel, troops, and other resources over land. Among Russia’s struggles has been bringing troops and resources to the front-line, and Ukraine has tried to make the problem worse. Russia has been attempting the same, targeting Ukrainian railway.[3]

The United States should learn from this, and create an old-fashioned weapon for an old-fashioned problem: the anti-rail landmine. Coupling old school concepts with modern capabilities can vastly improve effectiveness: the Civil War did not have dedicated special operations forces to emplace landmines, open-source imagery to easily map a country’s entire rail network, network analysis techniques and tools to identify strategic chokepoints, and modern long-range fires from rocket artillery to drones and aircraft for follow-up strikes on fixed trains and military engineers. Anti-rail landmines should not only serve US operators, but could be provided to allied nations. Ukraine would benefit a lot.

What an Anti-Rail Mine Can do

As Chuck de Caro proposed in Small Wars Journal, special operators could sneak deep into enemy territory, and emplace anti-rail landmines in strategic rail choke points.[4] De Caro proposed regular Semtex, but anti-rail landmines would damage, derail, or destroy the locomotive and cars in addition to the railway. Damaging, derailing, or destroying the locomotive or cars would make things much worse. Damaged, derailed, or destroyed cars or locomotives, weighing potentially over 60 tons, may need to be moved, before the train can continue or railway repairs can start. If the locomotive is derailed or severely damage, the train may need to wait for another locomotive to arrive to move the rail cars. All that delay slows delivery of the train’s supplies, while also fixing the train in a known position for follow-on artillery, drone, air, or special operator strikes. Even more so if the explosion also takes out a rail bridge. Recovering from a destroyed rail bridge is a big challenge; adding a destroyed locomotive and some train cars too would be a nightmare. Military engineers would need to work even harder, and longer to recover, increasing the vulnerability to follow-on attacks. 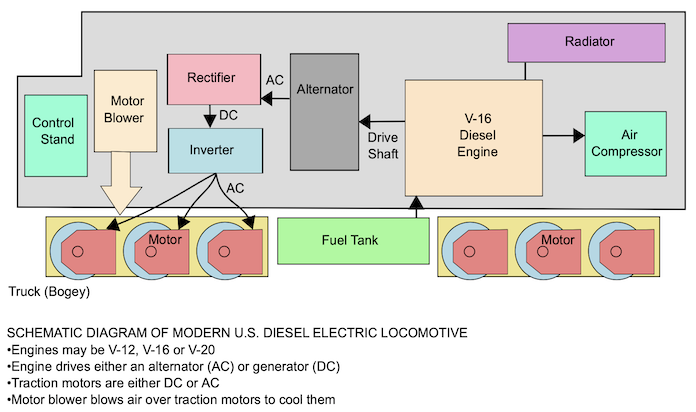 Diesel locomotives, the most common type of locomotive, may be quite vulnerable. The fuel tanks for a diesel locomotive are typically located underneath the locomotive frame, sitting just a foot or two above the ground and right beneath the engine. The tank carries up to 5,500 gallons of fuel. If the anti-tank landmine can trigger the fuel to explode, a relatively small charge could destroy the whole locomotive, along with damaging or derailing more cars too. Depending on the location of the locomotive and surrounding structures, the secondary explosion may cause even greater harm to stations, bridges, signal boxes, rail switches, and more. Of course, even without a secondary explosion, a derailed locomotive in the middle of nowhere would be a big challenge.

The nature of the rail system means only a small number of mines are needed to have significant effects. In typical sea, vehicle, and anti-personnel landmines, the mines need to be spread out over an area, because ships, tanks, and soldiers can just go around a single mine. But trains are confined to their track. Although railroad switches allow detours, the train must follow the track between switches. A single anti-rail mine may deny an adversary use of tens of miles of track, and those miles may be critical to supplying troops on the battlefield. Plus, that means mine layers have miles of options to choose whatever point presents the least risk, and causes the most harm.

The proliferation of commercial satellites makes things even easier. As de Caro’s images of Russian rail bridges show, railways are often highly visible. An open-source analyst psyched about trains can easily map a country’s entire rail system. In fact, that’s been done for the United States.[5] Vulnerable points in the system can be identified well in advance of any conflict. Network analysis techniques and tools used to shatter terrorist networks can also be applied to rail networks to identify critical routes, junctures, and other nodes where landmine placement would maximize systemic harm.

If anti-rail landmines prove effective, no doubt adversaries will develop and field defenses – but anti-rail landmines favor the offense. Compared to a typical minefield, an anti-rail minefield may be tiny: just a couple of planted explosives. That makes detection much harder, especially if the mines are nestled between the wooden or concrete slats that support the rail. Defenders potentially have to monitor and clear thousands of miles of track and would need the equipment, training, and personnel to do so. If train sensors can be easily added to existing explosives, anti-rail landmine procurement costs may be trivial with virtually no opportunity cost.

Making a basic anti-rail landmine would not be difficult. Folks in the mid-1800s pulled it off. Probably the biggest challenge is figuring out how much explosive of what kind is most likely to trigger the secondary explosive in the diesel fuel tank. Ideally, Semtex would work fine – special operators already carry that. Sensors would need to be developed and tested to lie upon the tracks to check that a locomotive is coming, and not a person or a car. Vibration, pressure, or magnetic sensors could work. Then just link the sensor to the explosive, add a small delay so the explosive fires when the fuel tank is right overhead, and add some camouflage so the landmine is harder to spot.

For all today’s modern wonders, the basic need to move soldiers from point A to B, ensure they are fed, and have enough bullets in their guns has not changed. Using anti-rail landmines to target the rail system that provide transit can provide significant military gain at low cost.

Thanks to Dave Kuhn for providing thoughts on the piece.

Zachary Kallenborn is a Policy Fellow at the Schar School of Policy and Government, a Research Affiliate with the Unconventional Weapons and Technology Division of the National Consortium for the Study of Terrorism and Responses to Terrorism (START), an officially proclaimed US Army “Mad Scientist,” and national security consultant. His research on autonomous weapons, drone swarms, and weapons of mass destruction has been published in a wide range of peer-reviewed, wonky, and popular outlets, including the Brookings Institution, Foreign Policy, Slate, War on the Rocks, Parameters, and Terrorism and Political Violence. Journalists have written about and shared that research in the New York Times, NPR, Forbes, the New Scientist, WIRED, and the BBC, among dozens of others in dozens of languages.

When police lights flash behind your moving vehicle, it's time to stop and wait for the officer to tell you why he's pulling you over. Let's say the officer informs you that the radar registered the car speeding. You realize that you are likely to get a traffic ticket. That's a traffic violation. What is a Moving Violation?

Traffic violation is defined as any traffic violation committed while the vehicle is in motion. It is a standard used by drivers licensing offices in the United States to assess a person's driving record. Moving violations are recorded on an individual's driving records, and many states revoke or suspend a driver's license if the driver has accumulated a certain number of moving violations in a year. In some states, the number of violations before suspension is two, but that differs from state to state.

One of the most common moving violations is acceleration. Police officers can issue a moving violation ticket to any drivers who exceed the speed limits. If the driver who received that citation pleads guilty or is found guilty in traffic court, the driver's record will reflect the citation and the driver's insurance rates may increase.

Lack of Proof of Insurance

Many states consider not having proof of insurance as another traffic violation. If a police officer pulls out a driver and asks for proof of insurance, the driver is required by law to show such proof. Failure to present the vehicle insurance card can lead to a moving ticket violation.

sign or red light is another type of moving violation. Drivers caught running a red light may receive a traffic violation ticket. These days, video traffic cameras are used at some intersections to record driver's license plate numbers when they violate red lights. The photograph is used as evidence against the driver.

Decades of experience with…

Decades of experience with rail infrastructure in conflict environments have taught us a great deal about this strategic infrastructure - both how to build it and how to destroy it.

Zachary Kallenborn proposes reviving the use of landmines to bring disruption to enemy rail transportation.  One point to make first: as with all minefields, unless scrupulously documented when placed, on a 100% assured basis (unlikely), then later, after a successful recapture of the territory concerned, the return to operation of the whole local rail network at a heightened time of need by friendly forces and civilian agencies could be significantly delayed.

Targeting of rail infrastructure has to be measured against a set of future outcomes, with the following points in mind:  Anything damaged or destroyed will at some stage have to be repaired or rebuilt by some entity.  Additional military advantage gained at the front end of a campaign may be at the expense of major disadvantage during the reconstruction period where rail transport is likely to be a key enabler.

Taking these factors into account, targeting and effecting disruption to the rail network is best advised by military rail specialists who are guided with the bigger picture in terms of the strategic military aims and objectives.  For example, destroying a simple rail underbridge will certainly block the route in question until temporary waybeams can be installed on a repaired substructure, and these may not be readily available.  Or perhaps there is only a need to frustrate the enemy in the short-term; in this case, a simple attack on a railway switch may be the proportionate solution.  However, there may be a need for total destruction of key rail infrastructure in some circumstances in which case the various options for achieving this should be considered whilst understanding the possible long-term outcomes of such a policy and the need to avoid causing civilian casualties.  As with most things, what one is trying to achieve in the short, medium and long terms will determine the methodology required to get there.

Finally, in disrupting rail operations, operating behind enemy lines in real time rather than leaving an unsupervised minefield behind will nearly always be more effective in the whole.

Note on correspondent:   Rich Brown is a professional engineer and a retired reserve engineer officer with the British Army with extensive rail experience in civilian and military environments.  He has served in Bosnia, Kosovo, Iraq and Afghanistan.  The arguments posted in this response are entirely his own and do not necessarily represent the views of any organisation.