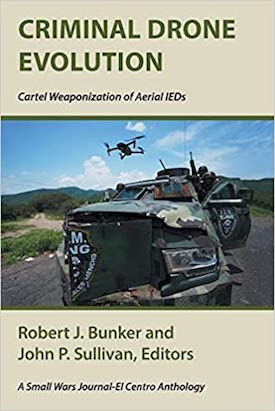 This Small Wars Journal-El Centro Anthology contains a preface on criminal drone use by journalist David Hambling followed by a foreword describing drones within criminal orders-of battle (OOB) by Lisa J. Campbell.  After and introduction by the editors , the text contains 22 chapters documenting the evolution of drone use in Mexico’s competitive narco-conflict ecology. It closes with a conclusion by the editors, an afterword by Conrad ‘Andy’ Dreby and Scott Crino on UAS potentials, a postscript by James T. Torrance on future unmanned systems threats, and five appendices.

Thank you very much for sharing this information. Like posts on your site. If you have time, keep updating, it's very helpful. png free