While publicly available details of Iran’s involvement in Yemen and its purposes there are limited, its support of Houthi rebels fighting against the Yemeni central government reportedly includes financial assistance, provision of arms, military training and operational advice.[i] In fact, Iran has recently increased its support to include sending unmanned aerial and surface systems, naval mines, advanced weaponry such as surface-to-air and anti-ship cruise missiles, and military advisers.[ii] Such a campaign is best characterized as unconventional warfare.

This paper seeks to analyze the Iranian conduct of unconventional warfare in Yemen, and address the feasibility of the operation, suitability to the strategic position of Iran, and acceptability of likely costs.

This conflict represents a complex proxy war between Iran and the U.S./Saudi coalition. Iran provides support directly to the Houthis, but also via its proxy Hezbollah (both deny providing any support), while the U.S. provides support to Saudi Arabia in its operations in Yemen, which include both direct military action and foreign internal defense in support of the Yemeni government.[iii]

Complicating the analysis is the fact that rival armed groups, including local affiliates of Al Qaida and Daesh, are also fighting against the Yemeni government and sometimes each other, and that other states are providing support to the government. This creates a highly unstable security environment, which the Houthis could benefit from, but it makes planning more difficult and increases the number of possible adversaries. However, instability in Yemen is itself a valuable objective for the Iranian sponsor, since this creates friction for Saudi Arabia, other Sunni states, and the U.S., all of which represent a bloc against which Iran is seeking to balance.

The likelihood of success in this operation can be assessed on the basis of several key factors, including availability of sanctuary, political identity and cohesion, government control, favorability of terrain, willingness of the movement to cooperate, the capability and effectiveness of its guerrilla forces and supporting organizations, and applicable sponsor capabilities.

Sanctuary is vital to any insurgency, as it provides time and space to rest, refit, retrain, and plan.[iv] The Houthis do not have the benefit of a sanctuary outside the borders of Yemen, but they do have effective control over a substantial area of northwest Yemen surrounding its core territory in Sa’ada and including Sanaa.[v] 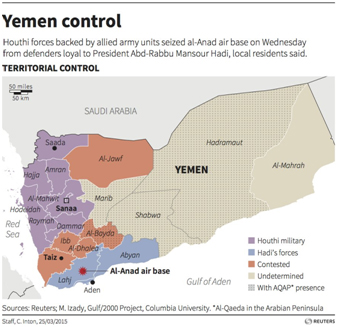 A strong political identity is vital to the long-term success of an insurgency, as it provides strategic direction, moral cohesion, and recruiting power; ethnic and sectarian identities are often especially salient.[vi] The Houthis have the elements necessary for a strong and unified identity, but reporting suggests that, as of 2015, they have failed to cohere into a cognizable political body, with some factions motivated primarily by non-ideological facts, such as avenging killings of family members, disenfranchisement by the government, and tribal agendas.[vii] No clear political objectives have been enunciated by the Houthi leadership.

An insurgency also relies on the relative lack of control of the government over its territory, as this creates space for the insurgency to operate and spread their message and opportunities to repurpose both legitimate and illegitimate trade to their ends.[viii]  Yemen fits the bill in this regard, as the central government has been struggling to survive and maintain control since before the Arab Spring in 2011, and in 2014 lost the capital.[ix]

Logistical considerations are favorable in that Iran has aid that is useful to the Houthis and developed the means to provide that aid covertly. Iran ships its material aid via cargo vessels, most likely to the port of Mukalla, where they are transferred to smaller fishing vessels for final delivery to Houthi controlled areas.[x] The cargo vessels often are unaware of the nature of their cargo, as the supplies are concealed within shipments of humanitarian aid and other legitimate cargo.[xi]

The direct costs of the operation, such as the provision of aid and employment of forces, will likely be relatively small compared to direct military engagement, and will likely be of the same order of magnitude as Iran’s support to Hezbollah or Bashad al-Assad. With the lifting of sanctions following the Iran Nuclear Deal, these costs should be quite bearable. Because relatively few Iranian forces are required, and Hezbollah can be relied upon to provide support in this area (though it denies providing support), the manpower costs required will be minimal.[xii]

The risk of widening the conflict to direct Iran/Saudi or Iran/U.S., while significant in terms of gravity, is an unlikely outcome so long as Iranian support remains covert and generally deniable, which is facilitated by the difficulty of concretely determining the source or destination of supplies smuggled about cargo vessels.[xiii]  Neither the U.S. nor Saudi would seek to engage Iran directly, and will be careful to avoid escalatory miscalculations, further mitigating the risk. However, they may seek to impose other costs on Iran for its support to the Houthis, such as diplomatic pressure and economic sanctions, the return of which would likely be quite costly. Even so, given its history of surviving oppressive sanctions regimes, the Iranian leadership and public will likely be willing to weather such set-backs rather than change course.

Additionally, the increased instability in Yemen, while generally redounding to the benefit of Iran by creating friction along the Saudi border, could create a “blowback” effect if it creates space for Sunni extremists with possible intensions to target Iran. However, these groups are already targeting Iran from Syria, as can be seen in the recent attack in Tehran. It is difficult to know how the Iranian public will react to further attacks, however, given their lack of recent experience with them.

Houthi and Iranian interests and objectives are generally aligned, but significant issues exist. Iranian objectives are to create costs and friction for Saudi Arabia and the U.S., obtain a foothold in the Bab-el-Mandeb, encircle Saudi Arabia, expand its influence and develop levers of power for future use.[xiv] Its interests here are thus similar to those it seeks in its support to Hezbollah, if Saudi Arabia is swapped for Israel.

However, while the Houthis are anti-U.S., anti-Israel, and anti-Saudi, they also reportedly lack a clear political agenda or organization.[xv]  While this has made joining the cause an easy choice for Shiite Yemenis with grievances against the government, it also makes it difficult to determine their precise objectives, or to predict the eventual result of success. For example, some Houthis may more strongly identify as Yemeni monarchists, rather than as devout Shiites, possibly leading to a less-than-satisfactory level of cooperation with the new government. However, if the conflict becomes prolonged, there will likely be time for Iran to foster the client/sponsor relationship. In addition, the alliance of the Houthi rebels with the former president Ali Abdullah Saleh, who was ousted by the Houthis in 2011,[xvi] may facilitate this process and provide necessary political organization.

Taking into account the factors affecting the feasibility, acceptability, and suitability of an Iranian unconventional warfare campaign in Yemen, and the strategic interests of Iran in the Arabian Peninsula, the balance of factors suggests that Iranian sponsorship of the Houthi rebels is a viable option with a strong chance of success at an acceptable level risk.

The long pole in the tent is the political organization and clear objectives of the Houthi rebels. This can be improved over time with a combination of advice to the Houthi/Saleh leadership and information operations. And while the cohesion of the Houthi rebels is somewhat questionable, there is reason to believe that this will improve with time as the crucible of conflict crystallizes the Houthi resistance. Additionally, Iran’s core objectives in this campaign (friction for adversaries, foothold in the Bab-el-Mandeb, encirclement of Saudi Arabia, and expanding influence and power) do not require a consolidated Yemen, only a viable partner in eastern Yemen. Focusing on this core territory and its relevant populations will help Iran achieve its ends while minimizing the gravest risks.

Paul W Taylor is an irregular warfare specialist in the Washington, D.C. area. He most recently served as a policy analyst and Strategic Communications Branch Chief for the United States Army Special Operations Command G-5 Functional Planning Division, as well as adjunct instructor of foreign policy at Methodist University.

Previously, Paul served from 2013 to 2018 as an irregular warfare policy and strategy analyst with Cydecor, providing support to the Deputy Chief of Naval Operations for Operations, Plans and Strategy (Navy Warfare Group) in the analysis and drafting of strategy, policy, concepts, and doctrine related to irregular warfare and the integration of conventional and special operations forces.

From 2008-2011, while studying at Seton Hall University, Paul was a research fellow the Center for Policy & Research, in which capacity he participated in habeas litigation for Guantanamo Bay detainees, investigated US military detention operations, and conducted research into forensic evidence and expert witness standards and processes.

Paul has served in multiple volunteer positions, including several leadership positions with the Young Professionals in Foreign Policy (YPFP), including most recently, as Chair of YPFP’s Defense Discussion Group. He is also founder and editor of the National Security Strategy Archive.

He has received a joint Juris Doctor and Masters of Arts in Diplomacy International Relations at Seton Hall University, in which he focused on national security issues. He also holds a Bachelor of Arts in theoretical mathematics from Sonoma State University, just outside his hometown of Santa Rosa, CA.

This is an excellent analysis of the Iranian expansion into the South West of Yemen. A nation once dominated by Egypt and remains under the watchful eye of the Saudis.
Another question is how has the Iranian Navy evaded blockades and continues delivering weapons and one assumes experts to the region?
How formidable is the Iranian Navy and private shipping across from the African Continent?
This is not made clear in the article.
It would seem if there is Iranian and Houthi vulnerability it is in the possibility they might be blockaded and support cut off.
It also suggests that Iran to maintain its support is willing to take risks and confront the USN and US War Planes and other coalition opposition seeking to impose a blockade of weapons.
The second question is, how did the Obama administration which set out to blockade Iranian support fail?