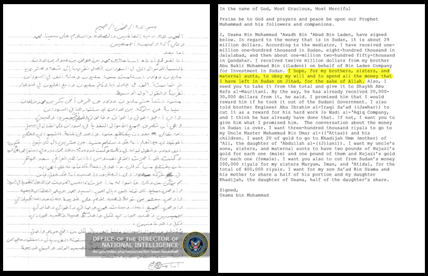 Source: Office of the Director of National Intelligence, http://www.dni.gov/index.php/carousel-items/1330-newly-declassified-documents-for-bin-laden-s-bookshelf

The Office of the Director of National Intelligence (DNI) released a second translated batch of declassified letters written by Osama bin Laden that were seized in the May 2011 raid at his compound in Abbottabad, Pakistan.  Several letters directly reference Iran as a funding source for al-Qaeda (AQ).  The first collection was released by the DNI in May 2015.[1]

Though many of the 113 declassified letters are about mundane concerns with reference to his family and certain al-Qaeda members abroad, the remainder refer to jihadi matters such as vowing for continued jihad around the world and how to advance those goals even after his death, as evidenced by the sample letter above. However, these letters have also provided a clearer impression of the relationship between al-Qaeda and Iran.  In a 2007 letter titled, “Letter to Karim,” bin Laden gives justification for why Iran should not be attacked: “Iran is our main artery for funds, personnel, and communication, as well as the matter of hostages…There is no need to fight with Iran, unless you are forced to.”[2] Bin Laden strongly advises against any attack on Iran, going to great lengths to urge any ambitious operatives to seek advisement or permission prior to any form of reprisal against Iran.

This isn’t the first time we are learning of this link between Iran and al-Qaeda, but this letter removes any and all doubt.  Some members of bin Laden’s family were known to be residing in Iran, including one of his wives. “Letter to Wife”[3] reveals a bit about bin Laden’s level of paranoia, expressing his concern over the possibility the dentist his wife visited in Iran would implant a tracking chip. One of bin Laden’s sons, Sa’ad bin Laden, was also in Iran accompanied by many other al-Qaeda affiliates. Iranian authorities began making arrests of known al-Qaeda affiliates, often times placing them under house arrest. In “Letter to Abu Nawaf,”[4] bin Laden reiterates the fact there are family members under house arrest in Iran, seeking some coordination to release them to the Waziristan area of Pakistan. Iran used those who were essentially held captive, though they were only under house arrest, to negotiate with bin Laden and other senior al-Qaeda members in neighboring Gulf countries. Though references to Iran in the first collection were limited, bin Laden expressed his distrust of Iranians in general, which relates to these newly released letters where he is openly discussing family members and al-Qaeda operatives in Iran. For instance, in “Letter Dated August 7, 2010,”[5] bin Laden stresses avoiding pressing the Iranians in releasing his son, Hamzah, to Qatar since Iranians might think they would be “exposed to the media and cause them to not release him.”[6] Yet bin Laden is also confident that Iranians are willing to cooperate with al-Qaeda if the group agrees to not attack any holy Shia sites, which is conveyed in a short letter, “My Generous Brother Tawfiq.”[7] This is likely not the only arrangement made between bin Laden and the Iranian government. Maintaining a neutral relationship allowed the steady flow of funds and personnel to pass through Iran, a bargaining chip the Iranian government used while harboring al-Qaeda members and preventing attacks on holy Shia sites. Yet, there was another understanding, which was the common enemy in the United States and Israel:

The need to be patient with the issue involving Iran and escalate towards it. We are now in a situation that does not allow us to antagonize Iran, especially due to the initial arrangements involving the external work. The issue of sympathizing with those striking Israel is one shock that we need to prepare ourselves to receive.[8]

An active al-Qaeda cell in Iran was necessary to continue the steady flow of monetary assets, personnel, and weaponry.  However, bin Laden was very well aware of the risks associated with this link to Iran.  Operatives in Iran became more meticulous when traveling in and out of Iran into Pakistan or elsewhere as well as in making arrangements to transport funds.

The relationship between al-Qaeda, bin Laden, and Iran stretches as far back as even the 1990s.  A senior al-Qaeda associate, Mustafa Hamid, “reportedly negotiated a secret relationship between bin Laden and the government of Iran” in the mid-1990s.[9] In 2001, he served as a messenger in Tehran between the Taliban and the Iranian government, and even “negotiated on behalf of al-Qaeda in an attempt to relocate al-Qaeda families to Iran.”[10] In addition to individuals, the U.S. Treasury department also designated Iranian entities under Executive Order 13224 (assets in U.S. jurisdictions frozen & prohibited designee transactions) for their cooperation with al-Qaeda. In February 2012, the Treasury designated the Iranian Ministry of Intelligence and Security (MOIS) “for its support to terrorist groups, including al-Qaeda, al-Qaeda in Iraq (AQI), Hezbollah, and Hamas, again exposing the extent of Iran’s sponsorship of terrorism as a matter of Iranian state policy.”[11] The MOIS reportedly arranged secure travel for al-Qaeda operatives in Iran as well as administering identification cards and passports. The Iranian agency also facilitated the movement of money and weapons to AQI and arranged for the release of AQI prisoners. Table 1[12] gives perspective on the al-Qaeda operatives in Iran and their roles, which the Treasury department designated between 2009 and 2011. 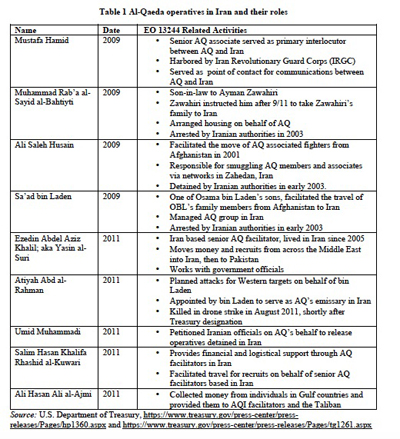 Table 1: Al-Qaeda Operatives in Iran and Their Roles

One of bin Laden’s final plots was targeting Germany and other European states.  An al-Qaeda recruit captured in Afghanistan revealed in legal proceedings in Germany that an al-Qaeda cell put into motion its network in Iran to carry out the attack. Ahmad Wali Siddiqui, who held dual German and Afghan citizenship, confirmed what Western intelligence officials discovered in fall 2010, that bin Laden ordered attacks in several European cities to resemble the attack in Mumbai in November 2008.[13] According to Siddiqui, in 2009 he and his fellow recruits planned different travel routes to avoid suspicion, specifically relying heavily on Iran.[14] Two al-Qaeda operatives, Rami Markanesi and Naamen Meziche, travelled to Iran from Vienna, a trip that was booked in Hamburg by an unknown Iranian.[15] Travel to Iran was safer and easier to bypass security. Members remained in Iran until it was safe to travel to their target destination. Al-Qaeda operatives in Iran facilitated travels with cooperation by the Iranian government.

The release of these letters is timely given the recent conversation relevant to al-Qaeda and the Islamic State (ISIS). In 2014, ISIS spokesman, Abu Muhammad Adnanis, gave a speech discussing the terror group’s torrid relationship with al-Qaeda:

The ISIS has kept abiding by the advices and directives of the sheikhs and figures of Jihad. This is why the ISIS has not attacked the Rawafid [rejectionists, a term used to describe Shia Muslims] in Iran since its establishment.  It has left the Rawafid safe in Iran, held back the outrage of its soldiers, despite its ability, then, to turn Iran into blood baths. It has kept its anger all these years and endured accusations of collaboration with its worst enemy, Iran, for refraining from targeting it, leaving the Rawafid there to live in safety, acting upon the orders of al-Qaeda to safeguard its interests and supply lines in Iran. Let history record that Iran owes al-Qaeda invaluably.[16]

Things changed soon after the speech.  Al-Qaeda’s leader, Ayman al-Zawahari, disavowed the Islamic State and its leader, Abu Bakr al-Baghdadi. To date, the separate terror organizations have very different goals, but the Adnanis’ speech spoke to how valuable the relationship between the Sunni al-Qaeda group and Shia Iran was such that even ISIS, at least for a period of time, was essentially ordered to stay out of Iranian affairs and borders.

Nonetheless, the recently released 2007 “Letter to Karim”[17] is the most distressing revelation to date, further bolstering the claim that there indeed was and possibly still is a relationship between Iran and al-Qaeda. Operatives and other al-Qaeda affiliates in Iran, as a few of the declassified letters suggest, can try and convert Shia Muslims to the Sunni faith, strengthening those Sunni’s groups which exist in Iran and Yemen for instance, all the while maintaining cells in Iran that help the al-Qaeda cause at large.  It could be argued that Iran may even employ the Sunni groups associated with al-Qaeda, effectively taking advantage of their relationship should there be an attack or form of retaliation against Iran.  It is another tool Iran can utilize, similar to the relationship the state had with the Taliban by supplying secret routes and funds. This should concern policymakers in lieu of the 2015 nuclear deal the United States negotiated with Iran. Many al-Qaeda members are likely still operating within Iranian borders. While the world focuses its attention on ISIS, the quiet resurrection of al-Qaeda should not be overlooked.

It was recently reported that President Clinton was informed by the FBI, Iran was behind the Khobar Towers attack. He sat on the report.
The book "End Game" suggests that Maliki was willing to meet all of President Obama's demands for a renewal of an agreement to post US troops in Iraq. Maliki then reportedly said he was ready to go after the Iraqi Sheikhs who were being supplied with EFPs by Al-Quds. Between 2005-2011 to 196 US soldiers were murdered and 861 wounded a result of Iranian supplied EFPs.
How President Obama came to the conclusion the Ayatollah and his government were people to deal with in light of these letters makes it even harder to comprehend how Executive decisions are being made.