The Islamic State in Iraq and Syria (ISIS) has succeeded in gaining an incredible amount of ground at a pace that caught the world off guard.  Even though they face opponents with overmatch in technology and firepower, ISIS has proven more than capable.  One way to understand ISIS is to seek to understand it as a complex adaptive system.  Arguably, ISIS’s lack of central control, rapid tempo, and unpredictable behavior suggest that it is a complex adaptive system, and a dangerous one at that.   The question this article will address is if ISIS displays the characteristics of a complex adaptive system, how should the international community address this threat?

Is ISIS a Complex Adaptive System?

In the 1950s through the 1980s, a “new” science emerged, one that sought to gain a deeper understanding of complex adaptive systems. Upon investigation, complexity scholars observed diverse and seemingly unrelated phenomena (such as ant colonies, weather systems, and the human brain) displayed behavior that adhered to certain rules. These observations have affected many fields of study and changed the way scholars seek understanding of the world. [1]

A complex adaptive system has no central control mechanism pulling the strings, and a person cannot hope to understand it as simply a sum of its parts. A complex adaptive system has components (called actors) that are independent but connected with each other and to the external environment. These actors co-evolve and small changes that can have big effects over time (often called the butterfly effect). [2]

Out of all of this interaction, order and patterns emerge, patterns that no person could have predicted by looking at any one component. These systems learn and grow when they are away from equilibrium; when a system stagnates, it dies.  A paradox exists where surface simplicity indicates deep complexity, and surface complexity really indicates deep simplicity.  One cannot predict the behavior of these systems from past behavior nor can one see causality and dependency in retrospect. [3]

ISIS certainly seems to display most of the attributes of complex adaptive system. It does not have unifying central control and is a mix of small groups and sub-groups of actors unified by a common purpose. These groups act independently, and in a highly unpredictable, self-organizing way.  Its lack of formal organization has not hampered its effectiveness and ability to defeat better-organized forces with superior equipment and training.  Even though they come from all over the globe to fight, the strength of their common will creates a bond that holds them together against a common enemy (even though they fight each other at times).  Either by default or deliberately, it appears that ISIS has behaves as a complex adaptive system at war. [4] 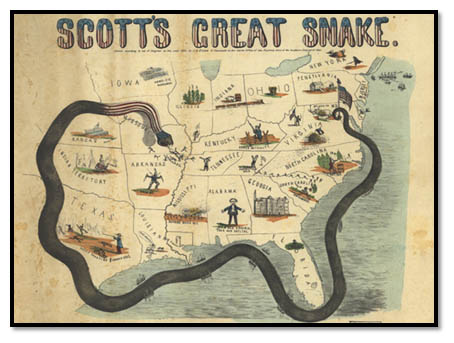 An “Anaconda” Strategy for ISIS?

If ISIS fights as a complex adaptive system, then the international community could apply knowledge of complex adaptive systems theory to defeat them.   Twice in its history, the United States has employed an “Anaconda” Strategy.  General Winfield Scott developed an “Anaconda” strategy to isolate and strangle the Confederate States (photo above).  More recently, General David Petraeus employed an “Anaconda Strategy versus Al-Qaeda Iraq” to isolate the adversary both physically and conceptually (photo below).  The international community should consider application of the “anaconda” metaphor to this new context.  One such approach could approach on three fronts: (1) establish boundaries to isolate and contain; (2) intervene on multiple fronts early and often; and, (3) conduct near simultaneous elimination of the connectors. 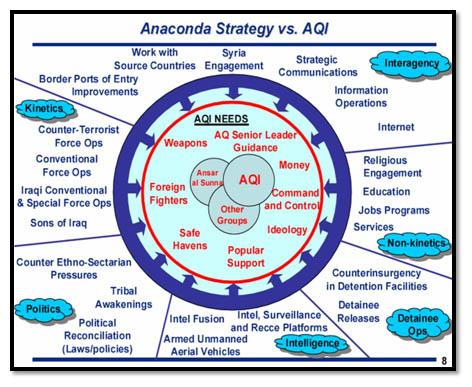 Establish Boundaries to Isolate and Contain

All complex adaptive systems have boundaries that one can understand even if the system itself seems to defy explanation. Without growth, complex adaptive systems move toward entropy, and eventually death. Through isolation and containment, at the boundaries begin form around the problem.  Much like in the treatment of cancer, once identified, the first goal is to prevent the tumor from growing.

The international community can contain and isolate at tactical, operational and strategic level, the ISIS through forging new diplomatic partnerships and the deployment of military forces to backstop further growth.  These forces would prevent anything from coming in or going out physically and possibly psychologically as well.  Using this technique, the key is to fight ISIS where they are not, to make ISIS military expansion as difficult as possible.

Although the U.S. should support and enable this effort, nations in the region must support a containment strategy or the effort will eventually fail.  The international community should engage Iraq, Turkey, Jordan, Israel, Egypt, Saudi Arabia, Kuwait, Qatar, U.A.E, Turkey, Afghanistan, the Kurds, and other regional stakeholders.  The international community should also seek the political buy-in of Syria and Iran, even if they have to go through third parties to do so.

Concurrent with the isolation, the international community should conduct direct intervention where possible.  Complex adaptive systems are very sensitive to initial conditions and, as such, the international community should consider intervention early and often.  This intervention need not be solely military in nature, and should include all available instruments of national power (diplomacy, information, military, economic, financial, intelligence, and law enforcement) balanced appropriately.

As time progresses, the international community should apply direct continuous concentric pressure on all possible fronts to create a constricting effect.  With fewer and fewer options available, the world would force ISIS to act in a way that is even more isolated.  This would serve to control ISIS’s tempo, eventually allow the international community to gain the initiative.

Conduct Near-Simultaneous Elimination of the Connectors

Complex adaptive systems are self-organizing. As the system organizes, a hierarchy is established and leaders come to the forefront.  It seems counter-intuitive, but letting this happen helps stabilize the system. Much like in criminal organizations, overtime, three tiers of ISIS will eventually emerge: leaders, connectors, and workers. Capturing or killing the leadership throws the system back into disorganization, which actually causes the system to emerge stronger.  Eliminating all of the workers is also difficult as it takes a largest amount of resources and time.

The key here is to allow the system to stabilize and then eliminate the mid-tier connectors in a near simultaneous fashion.  Law enforcement commonly does this in racketeering and drug cases with a near simultaneous ‘round-up’ of all members of a criminal organization.  This weakens the system, and prevents it from operating effectively. Leaders find themselves unable to lead anything and workers find themselves without resources or guidance.  Unable to find a position of power, the international community would find ISIS leadership more amenable to accept their will and comply with international norms.  Once weakened, the international community must help provide a viable governance alternative and help build its legitimacy. The international community must have the follow-through to address the critical question of what’s next.

Much like any strategic approach, an anaconda-type approach has its faults.  It takes time, effort, a plan, and the willingness of the international community to accept a large degree of risk.  In contrast, other approaches that solely target leadership, (e.g., ‘mow the grass’, ‘cut the head off the snake’, etc.) only make the problem more complex and allow the adversary to rise from the ashes stronger and more determined than before.   Simply, ISIS is a wicked and complex problem and the international community would be wise to address it as such.

Lieutenant Colonel Aaron Bazin is a Functional Area 59 officer and currently works at Joint and Army Concepts Directorate at the Army Capabilities and Integration Center at Fort Eustis, Va. Previously, he served as U.S. Central Command as lead planner for the 2010 Iraq Transition Plan and other planning efforts. His operational deployments include Pakistan, Afghanistan, Iraq, Qatar, United Arab Emirates, Bahrain, Kuwait, and Jordan.

Scott's Anaconda was a cartoon which did not consider the independent campaigns of the Civil War.