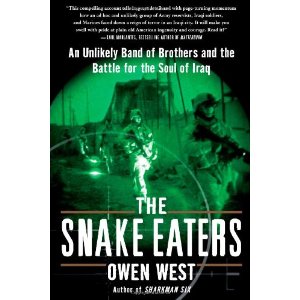 Judging the book, “The Snake Eaters” (Free Press, May 1, 2012) by Owen West by its cover, I would never have picked it up.  That would have been a mistake.  I would have assumed that this was another first-person “there I was” tale from Iraq.  After hearing far too many contractors and retirees try to slyly slur that they “have a bit of a SOF background” in a conspiratorially lowered voice, I would have assumed that the title referred to another attempt to anoint some unit or experience as “special.”  I would have been wrong.  Owen West has written an eminently useful and readable account of an advisory team in Iraq that, without being pedantic, should make us question the conventional wisdom about counterinsurgency, advising, and what works and does not.  It should also add to our anger about opportunities squandered, troops left twisting in the wind without the proper training and support, and a conceptually ill-disciplined force wandering every which way, rather than fighting a consistent and unified battle.

“The Snake Eaters” is not about Owen West, nor the Special Forces.  It centers on his predecessor advisors (Team Outcast) partnered with the Iraqi Battalion 3/3-1 (“the Snake Eaters” after their unit insignia) in Habbaniyah, Iraq.  West does not show up until the last 50 pages of this 300-page tome.  The story is about how a collection of under-trained, under-equipped, and often forgotten advisors learned how to advise and combat an Iraqi insurgency on Iraqi terms.  For West, this story is of great importance because, in “these murky twenty-first-century wars, all roads out lead through the combat advisor.”  Yet, despite this importance, West walks us through the maddening lack of support this effort received, especially in 2005 and 2006.  Teams were given only 42 days of training, he states, and very poor training at that.  Once in country, they were poorly resourced and often relegated to independent operations with little or no support from adjacent American units.  The “way out” – Iraqi forces capable of fighting their own insurrection – was an afterthought, or so it seems in this instance.

The teams’ training was premised on the assumption that they would be spending their time on forward operating bases conducting training, rather than conducting combat patrols with their partners.  This proved to be an extremely poor assumption.  Likewise, cultural education was very brief and woefully inadequate.  In short, the advisors showed up to Iraq with no idea what was expected of them and what, in reality, their true mission was.  As a result, they made it up as they went along.  For Team Outcast under LTC Michael Troster, the results were impressive.  Under the next team leader, they were less so.  The lack of conceptual unity not only left tactical conduct to the whims of personnel of varying quality, it meant that the whole effort, from personnel selection and training, to tactical employment of the advisor teams, to the interaction of advised Iraqi units with adjacent coalition forces, to the conception of counterinsurgency writ large, was done in a haphazard and sometimes directly counterproductive manner.

West finds that the advisors’ Iraqi partners often had a clearer concept of the counterinsurgency environment than they or their leadership did.  According to West, Major Mohammed, one of the battalion’s most focused officers, “had a clear, effective, streetwise philosophy that the Americans running the war did not.”  West even goes so far as to state that the vaunted FM 3-24, Counterinsurgency Manual, “was theoretical, filled with opaque guidance,” and that it and other writings on COIN “need drastic revision.”   On one hand, he notes that the aggressive undercurrent of the Marine commanders in Anbar worked against COIN platitudes, but on the other hand LTC Troster opined that Americans see “population-centric” COIN as a popularity contest to be won by being friendlier and spending more money, whereas the Iraq troops wanted to be tougher.  Without clear conceptual guidance from the top down, there was nothing to set priorities between adjacent units at a given time and there was nothing to enforce the discipline of continuity between the constantly rotating units in a given area.  With more conceptual discipline, perhaps the reduction in violence realized during the surge may have come much earlier.

The conventional wisdom is that the Surge of troops in 2007 and the magic of population-centric counterinsurgency fortuitously combined to create the Anbar Awakening, in which the Sunni tribes turned against the extremist insurgents, and the Sadrist truce, in which Muqtada al-Sadr’s Jaish al-Mahdi also agreed to stop fighting.  Others have argued that the Sunnis were actually sick of al Qaeda in Iraq well before this and that the Sunni-Shi’a violence in Baghdad and surrounds stopped primarily because those areas had fought themselves out and partitioned by 2007.  West’s case study tends to support this view.

On April 14, 2006, far ahead of the Surge and the Anbar Awakening, the head of the Khalidiya Tribal Council came forward to 3/3-1 to broker some form of cooperation in Habbaniyah.  Violence had dropped off significantly, locals were far more forthcoming with tips, and the battalion was becoming a respected presence.  A few short days later, a special operations night raid detained an influential imam, derailing a much-anticipated meeting with the sheikh and sending violence skyrocketing again.  This example from Habbaniyah suggests that the sheikhs’ discontent with Al Qaeda in Iraq extremism may have percolated earlier, had it not been for our one step forward, two steps back fumbling as varying conceptions of war (advising and partnership, COIN, special operations direct action, or unilateral large unit operations) each denied the other successes.

West offers no real answer to the conundrum, but that was not the purpose of his book.  It is a book that tells the story of one small piece of the Iraq war; a war that the Iraqi soldiers advised by Team Outcast – the ones that stayed on and stayed alive – are still fighting.  Their success will depend in large part on the efforts of the trainers and advisors that fought alongside them.  In Afghanistan, too, it has become clear that the combat advisor – now increasingly well-equipped, trained, and resourced – is critical to transition.  Therefore, West’s offering is very timely.

The book is very well written and engaging and was thoroughly researched.  The story is informed not only by in depth interviews from advisors, Iraqi soldiers, and U.S. generals, but also by the classics of counterinsurgency.  I tend to agree with West that, when we have an irrefutable interest in such small wars, the only way out is through indigenous security forces.  In line with the classics, West notes that this is a non-traditional skill that requires years of specialized training.  What is not clear is where such forces would fit into a shrinking military and under what circumstances we would turn to such skills to train foreign forces in future conflicts.  Furthermore, what we don’t see from West’s narrative is that no matter how well the advisors trained the Iraqi forces, there will be no victory without a stable political solution to Iraq’s numerous flashpoints.  Until America’s strategic elites more fully consider the clashing reality of a chaotic, modernizing world and a shrinking appetite for defense spending and military interventionism, the lessons West wants us to learn will never be put in their proper place.  Perhaps the most poignant question in the book comes from West’s friend and interpreter, Alex, who asked of the American generals, politicians, and commentators, “How can they understand so little?”

Peter J. Munson is a Marine officer, author, and Middle East specialist.  He is the author of War, Welfare, and Democracy: Rethinking America's Quest for the End of History (Potomac, 2013) and Iraq in Transition: The Legacy of Dictatorship and the Prospects for Democracy (Potomac, 2009) and .  A frequent contributor to multiple journals and blogs, including his own, he was also the Editor of the Small Wars Journal from January 2012 to June 2013.  You can follow his Twitter feed @peterjmunson and find his LinkedIn profile here.  He is leaving the Marine Corps in summer 2013.

Zenpundit has written a review too and concludes 'Strongly recommended'

There have been countless comments on countless articles in the last two years here at SWJ---when are we going to finally address in a clear and concise manner what really happened during the surge year 2007?

(Added by Moderator. The question above has become a SWC thread; http://council.smallwarsjournal.com/showthread.php?t=15481 )

Only when there is an accurate understanding of just why things did or did not work in the surge phase can we understand and move forward without creating new myths and countless reputations.

I still maintain that we did not as a Force understand that in fact by Jan 2004 we were in a full scale Stage Two guerrilla war and in fact AQI created their own downfall by overreaching inside the Sunni communities-and not our "surge" which led AQI to be fully sidelined.

Maybe the past (only five years ago) is now becoming more interesting with such books---but as an institution the Force is not ready to address the success or failure of the surge years-too many reputations were made in those years. And---Who wants to throw stones at reputations as it is definitely not good for ones' career.

Lack of unity of effort....as in a BCT CDR ignoring what his DIV CDR and the ADC tell the the BDE (AAB in this case) to do?

Maybe this is partly the result of fighting the war one year at a time for the last 10 years.

Peter, you allude to conceptual problems. I think that is at the heart of the last 10 years of missed opportunities.

Beyond the level of concepts, I think there was a lacking of "first principles." We were like a rudderless ship.

The two fundamental principles I think we've failed to internalize are IMAGINATION and UNITY OF EFFORT. The experience of the 101st in 2003 seems like a moment in time which never repeated itself again. Most other commanders generally failed to inspire imagination and also failed to inspire unity of effort. The latter failing is what I really scratch my head about. When I saw during my tours in Iraq the lack of unity of effort among senior and subordinate headquarters, I was stunned. Forget about unity of effort with attached units, with general supporting units, with governmental partners, and with NGOs. We frequently failed to achieve unity of effort among U.S. Army units within their standard, assigned chain of command. I was stunned when I first saw this and then continued to see it replay itself over and over again.

I think there is a little bromance in the trons…

At the risk of appearing overly sycophantic, I just wanted to say that your review is very meaningful. By now you've evidenced a very commendable inability to tolerate fools and careless thinking, as well as (of course) a real talent for writing and analysis at an incredibly high level of sophistication. If you write this book is good, it means I will at a minimum check it out on Amazon, and probably proceed to purchase it without much more in the way of due diligence.

As long as I am in a complimentary mood, my understanding is that you edit SWJ in addition to editing your own blog, perhaps additional writing, being a Marine with two MOSs (sic?), and are as well, I think, a husband and father. My personal hope is that if/when you retire from the Marine Corps, you provide seminars and perhaps personal coaching on time management and how to maximize the hours in one's day at low cost, because I suspect I would find it quite informative and useful.

Your abilities as well as your time management skills are both quite remarkable.