We Have Met the Enemy and He Is PowerPoint - Elisabeth Bumiller, New York Times. 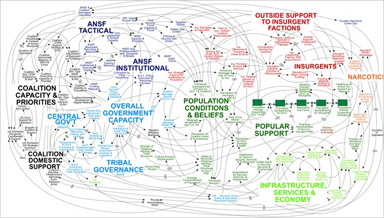 Gen. Stanley A. McChrystal, the leader of American and NATO forces in Afghanistan, was shown a PowerPoint slide in Kabul last summer that was meant to portray the complexity of American military strategy, but looked more like a bowl of spaghetti.

"When we understand that slide, we'll have won the war," General McChrystal dryly remarked, one of his advisers recalled, as the room erupted in laughter.

The slide has since bounced around the Internet as an example of a military tool that has spun out of control. Like an insurgency, PowerPoint has crept into the daily lives of military commanders and reached the level of near obsession. The amount of time expended on PowerPoint, the Microsoft presentation program of computer-generated charts, graphs and bullet points, has made it a running joke in the Pentagon and in Iraq and Afghanistan.

"PowerPoint makes us stupid," Gen. James N. Mattis of the Marine Corps, the Joint Forces commander, said this month at a military conference in North Carolina. (He spoke without PowerPoint.) Brig. Gen. H. R. McMaster, who banned PowerPoint presentations when he led the successful effort to secure the northern Iraqi city of Tal Afar in 2005, followed up at the same conference by likening PowerPoint to an internal threat...

More at The New York Times.

Does the Military Overuse PowerPoint? - The Tank

How Many SWJ Writers Can You Spot in this Article? - Starbuck, Wings Over Iraq

When Technology Is The Problem - Bill Egnor, Firedoglake

The Battle for Hearts and Bullet Points - Michael Evans, The Times

Why the Military Declared War on Powerpoint - Max Fisher, The Atlantic

The US Military's War On PowerPoint - Kyle VanHemert, Gizmodo

And of course a blast from the past ppt that got many thinking WTF?:

I concur with GEN Mattis;Powerpoint has made us stupid. But, only because we've allowed it to happen.

What would GEN Depuy think about PowerPoint? He would love it, but he might use it differently, but not much. GEN Depuy, if I remember correctly liked storyboards. He liked using hand drawn cartoons on VGT to show the key events to "show what its supposed to look like". It was a view that was borne out in the manuals that GEN Depuy helped fashion; draw them a picture, show them what it's supposed to look like. Trouble is that PowerPoint more often then not does not show what the product is supposed to look like. Worse yet because it is used in place of text, the graphics used can not be accessed by text searches and text based data processing. SO the way to fix Powerpoint is to make sure that it does what GEN Depuy might have used it for, to show what its supposed to look like in clear pictures that are easily understood, that is to use PowerPoint for creating and displaying story boards. Many of the people who use PowerPoint in the military do not have the tools that would make it easy to make storyboards on PowerPoint. What TOC has a scanner to be able to scan in images into the presentation? What TOC has the graphics programs anf the digital tablets and the trained personnel? AT least if you have a scanner, someone can dray the storyboard on paper and then scan it in. The only advantage that the PowerPoint gives if hand drawn images are used for storyboarding over the old VGT if that the presentation can be stored as a presentation in PowerPoint while it can not as a VGT.

I think though that if we drive home the point that the PowerPoint is there to tell a story and a storyboard is a very good technique for graphically telling a story, and it can be presented on PowerPoint we might be able to solve some of PowerPoints issues by using it the way that GEN Depuy might have.

I thoroughly enjoyed and agreed with this article. Thank you for posting it! As a speech coach, I just blogged about it in my speaking advice blog, http://sarahgershman.blogspot.com/2010/05/beware-of-powerpoint.html

As you'll see in this first slide....

Actually, I think this slide is the exception to the usual complaints about PowerPoint - no joking. The intention was to portray the complexity of the situation in Afghanistan, and does so perfectly - at a glance, one can appreciate just how many different factors and factions are at play.

Damn Schmedlap, I can't believe I forgot your ppt on ppts. Added to the link list above - DaveD.

Read the first two sildes and then deleted the presentation--guess what--the program was approved for funding and is still in business.

So maybe MORE is better where money is involved.

I'm nor sure about the color scheme on the Gettysburg PowerPoint. There are probably other font choices available, too.

Powerpoint is a great tool for showing maps, photographs with the final slide showing a brief summary, as the last thing seen is the first remembered.

Also never give the handout until the end. Otherwise people read that and don't follow your talk.

The term "death by PowerPoint" does not exist for nothing.

Try to get any military decision maker, DARPA, JIEDDO, Army AAR, CTC AAR reviews, BCT Cmdr, research programs to put together a PowerPoint slide presention of TEN or less slides on the topic!

Impossible---what happen in the last six years to convinced everyone that MORE is BETTER?

I use to brief off of three and everyone declared me to be crazy---usually a opening statement, highlights of the total presentation and then take away comments---what more does one need? We have gotten away from being great briefers using the spoken word which actually means one has to understand the subject---PPT just masks non-knowledge.

I heavily recommend Edward Tufte's <a href="http://www.edwardtufte.com/tufte/books_pp">"The Cognitive Style of PowerPoint"</a>, which looks at how the use of PowerPoint led to the 2003 NASA Columbia disaster.