Victory Over IS on Lebanon-Syria Border Is Boon for Hezbollah

Victory Over IS on Lebanon-Syria Border Is Boon for Hezbollah 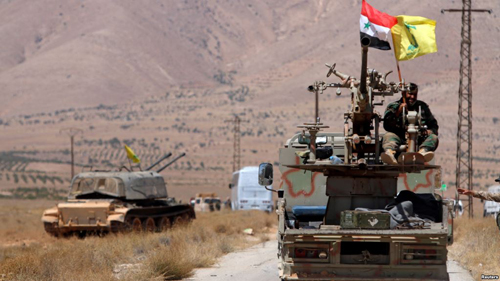 As convoys of the Lebanese army on Wednesday returned from a recent operation against Islamic State militants in the border region with Syria, cheering civilians showered them with rose petals and danced around them with Lebanese flags.

It was a moment for Lebanon to celebrate the expulsion of IS from its redoubt in Qalamoun region close to the Syrian border. IS had been in control of the region for more than three years.

Experts warned, however, that what might seem to be a Lebanese victory could be a Trojan horse hiding Iranian-backed Hezbollah, which emerges as the main victor in the operation.

Hezbollah, a Shi'ite political and militant group founded in early 1980s following the Israeli occupation of Lebanon, is considered a terrorist organization by the United States, European Union and the Arab League.

Supported by Iran, the group led an anti-Israel campaign for several years in the region. Since the 2011 Syrian civil war, its focus has shifted to saving the Syrian regime of Bashar al-Assad.

The weeklong offensive on the Syrian-Lebanese border started last Saturday when the Lebanese army in Lebanon and Hezbollah fighters along with Syrian government forces inside Syria attacked the IS enclave in the mountainous Qalamoun region.

Hezbollah's Truce With IS

The fighting in the Qalamoun region quickly halted after Hezbollah brokered a controversial agreement with IS that reportedly allowed hundreds of IS fighters and their families, escorted by the Syrian army, to safely move to IS's remaining territory in Dier ez-Zor province on the Syrian border with Iraq.

In exchange, IS agreed to hand over Qalamoun with no resistance and provide information about the burial site of several Lebanese soldiers and Iranian Revolutionary Guard members it had killed.

The deal was criticized by many opponents and prompted two U.S. airstrikes in Syria on Wednesday aimed at stopping the convoy of the IS fighters from reaching the Iraqi border.

But to Hassan Nasrallah, the leader of Hezbollah, the deal was a victory.

"This is what we call the Great Victory," Nasrallah said in a televised address on Tuesday, adding the operation was "a continuation of the battle against Israel and the U.S."

"The Lebanese army fought in the battle but did not get to have any say in these negotiations," Hanin Ghaddar, a Lebanon expert at the Washington Institute, told VOA. "This is very bad for the Lebanese institutions and state, because at the end of the day, Hezbollah got the credit."

Ghaddar added the terror group would not only exert control over cross-border trade and movement between Syria and Lebanon, but would also exploit the victory to gain more legitimacy and domestic support in the eyes of ordinary Lebanese.

Access to Qalamoun will potentially pose a threat to nearby Arsal as well, a predominantly Sunni town 124 kilometers northeast of Beirut. The town is home to roughly 50,000 Syrian refugees, the majority of whom are Sunnis.

Hezbollah does not shy away from its anti-Syrian refugee rhetoric. For months, pro-Hezbollah leaders have used organized political and public pressure to force the refugees into leaving the country.

The refugees are often accused of terrorism and supporting Sunni extremist groups that fight the Assad regime.

Earlier this year, Hezbollah tried to negotiate multiple deals with rebel groups affiliated with the Free Syrian Army, such as Saraya Ahl al-Sham, to return some of those refugees to Syria. The negotiations reportedly led to the relocation of more than 12,000 refugees to southern Syria in July.

Abu Khaled al-Qalamouni, a Syrian activist who monitors the refugee conditions in Arsal, told VOA that recent clashes did not quite reach nearby Arsal.

"The civilian refugees in Arsal stayed clear from the clashes because the town is a bit far from where the clashes took place," he said. But he added that refugees feared Hezbollah might go after them following IS removal.

Ghaddar, of the Washington Institute, warned that control over Qalamoun and the possible relocation of refugees in Arsal would also give Hezbollah the opportunity to force the Lebanese government and army into cooperation with the Syrian government.

"The return of refugees is just a part," she said, adding, "What they are trying to do is to give legitimacy to the Syrian regime by pushing the Lebanese state to coordinate with it."

The Lebanese army, however, is denying coordination with Hezbollah and argues that doing so would come at the expense of losing U.S. support.

Even when the military's operation against IS this week coincided with that of the Syrian government and Hezbollah, it said it did not coordinate.

Since 2006, the U.S. has provided $1.5 billion in security assistance for Lebanon, mainly to counter Hezbollah.

U.S. President Donald Trump in July praised Lebanon for being on the "front lines in the fight against ISIS, al-Qaida and Hezbollah," using an acronym for the Islamic State group.

"America's assistance can help ensure that the Lebanese army is the only defender Lebanon needs," Trump said at a White House news conference standing alongside Saad Hariri, Lebanese prime minister.

Some experts, however, said they saw Hezbollah as the main player.

"Hezbollah is the actual master of Lebanon," Mordechai Kedar, a Middle East scholar at Bar-Ilan University in Tel Aviv, Israel, told VOA. "Hezbollah slowly and gradually took control of the government in the past few years."

Kedar said the recent control of Qalamoun region by Hezbollah and its tightening grip on Lebanon were "alarming conclusions" for neighboring Israel, which considers the group a grand threat to its national security.