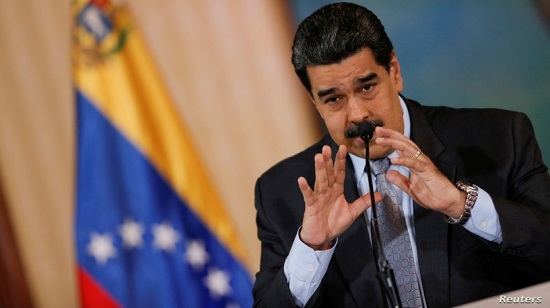 A top U.S. military commander says embattled Venezuelan President Nicolas Maduro is slowly but surely losing his grip on power, forced to rely on countries like Cuba and Russia, and even on drug cartels, to stay in office.

The United States, along with more than 50 other countries, has been calling on Maduro to step down following his 2018 reelection, charging the vote was rigged and instead recognizing opposition leader Juan Guaido as Venezuela's interim president.

Washington has slapped the South American country with repeated economic sanctions aimed at eroding Maduro's support. Most recently, the U.S. sanctioned three Panamanian companies and one from Cyprus that have been shipping oil from Venezuela to Cuba.

Faller, who oversees the use of U.S. military forces in much of Central and South America, said Friday it is clear that Maduro cannot hold out indefinitely.

"We have a dictator, an illegitimate leader being propped up by Cuba, Russia and to some extent, a lesser extent, China," Faller said.

"Nearly 100% of the presidential guard is now Cubans," he said. "There are hundreds of Russian contractors and forces in Venezuela, as we speak."

In addition to providing Maduro with troops and weapons, Moscow has also served as a financial lifeline for Venezuela, extending the country more than $17 billion in loans and credit since 2006.

But U.S. officials say while Moscow remains interested in maintaining its traditional alliance with Venezuela, in part to preserve arms sales, it's interest in Maduro may only go so far.

"I see Maduro being increasingly isolated and increasingly manipulated by Russia," Faller said. "Frankly, at the end of the day, the Russians want his money, to pay back the debt that he owes them."

In the meantime, U.S. officials say they see indications that even with Moscow's help, Maduro and his supporters are feeling squeezed by international sanctions.

No longer able to make enough money off of Venezuela's state-run industries, they say Maduro has been increasingly active in selling gold on the black market.

Faller also said Maduro has been working with transnational drug cartels, going as far as to let them fly narcotics out of Venezuela using commercial airlines.

Maduro, on Monday, rejected talk that his government was struggling for cash, saying he was laughing at the latest sanctions.

He also seized on the start of the impeachment inquiry against U.S. President Donald Trump, saying allegations the U.S. leader used his position to seek damaging information against a political opponent were not at all surprising.

"That's what Donald Trump does every day against Venezuela," Maduro said during a news conference in Caracas. "If they checked all [Trump's] calls in the last year, they would find enough evidence to prove the abuse of power against noble Venezuela."

In addition to sanctions, Trump and other U.S. officials have also hinted at the possible use of military power to force Maduro from office.

"It's certainly not our desire to see any military intervention. We want a peaceful transfer of power," former U.S. National Security Adviser John Bolton told VOA this past August. "But nobody should think that we're going to allow this to continue."

For now, though, Southern Command's Faller said economic and diplomatic efforts should be allowed to ratchet up the pressure on the Maduro regime.

"We're ready. We're on the balls of our feet," Faller said. "The planning that we're doing is focused on the day after, when a legitimate government is in place."