The Iraqi government announced Saturday that it would temporarily halt the battle to re-take Mosul from Islamic State jihadists after reports emerged of heavy civilian casualties, a security forces spokesman said. 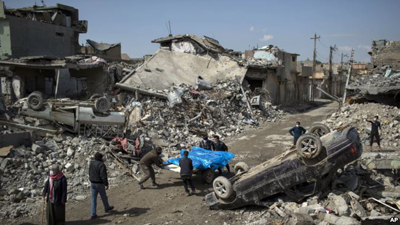 The halt in fighting was announced as the American-led coalition is conducting an investigation into coalition airstrikes that some reports say recently killed more than 100 civilians in Mosul's Jidideh neighborhood.

A coalition statement said it has "opened a formal civilian casualty credibility assessment on the allegation."

The statement also said coalition planes "routinely strike" IS targets in the neighborhood, and coalition forces "take all reasonable precautions during the planning and execution of airstrikes to reduce the risk of harm to civilians."

While Col. John Thomas — a spokesman for the U.S. Central Command — told The New York Times the military was not sure if an explosion in western Mosul was caused by an American or other coalition airstrike, or an IS "bomb or booby trap," an Iraqi officer told the newspaper he knew exactly what happened.

Major General Maan al-Saadi — a commander of the Iraqi special forces - told The Times that his men had called in a coalition airstrike to deal with snipers on the roofs of three houses in Mosul Jidideh. He said, however, his forces did not know the basements of the houses were filled with civilians.

Nawfal Hammadi, governor of the territory surrounding Mosul, told the French press agency that IS jihadists had gathered civilians in the basement of the building to use them as “human shields.”

"The Daesh [Islamic State] terrorist organization is seeking to stop the advance of the Iraqi forces in Mosul at any cost,” he said, referring to IS using its Arabic acronym.

Iraq’s parliament speaker Salim al-Jabouri mentioned the apparent civilian deaths on Twitter Saturday. He encouraged coalition forces to “spare no effort to save civilians,” but acknowledged the “huge responsibility the liberating forces shoulder.”

Civilians, humanitarian aid groups and monitoring officials have warned about the possibility of increased civilian casualties because of an increasing demand for airstrikes and artillery.

Coincidence?
The high civilian death toll which has never been questioned when the Russian/Iranian Militias and Assad's area of operations and certainly never stopped on going ops even though their acts have been more egregious and sometimes actual war crimes. But this action has caused another coalition halt?
I have been reading that because the Turks have pulled out the Kurds don't have what they need to push ahead; tanks.
The second aspect of concern is the Kurds will have to be taught to use tanks and the third concern is the Kurds may be loathe to push ahead when they are sensitive to the possibility that the Turks might seize the opportunity to occupy Kurdish villages.
But hey, we are running with the civilian casualties? I can go with that, it certainly makes it look like our lack of control of a fractured coalition isn't even a consideration, the war is on hold because of our great compassion. Print!