And I would add this new meme.  As I have written, President Zelensky is giving us a master class in strategic communications. 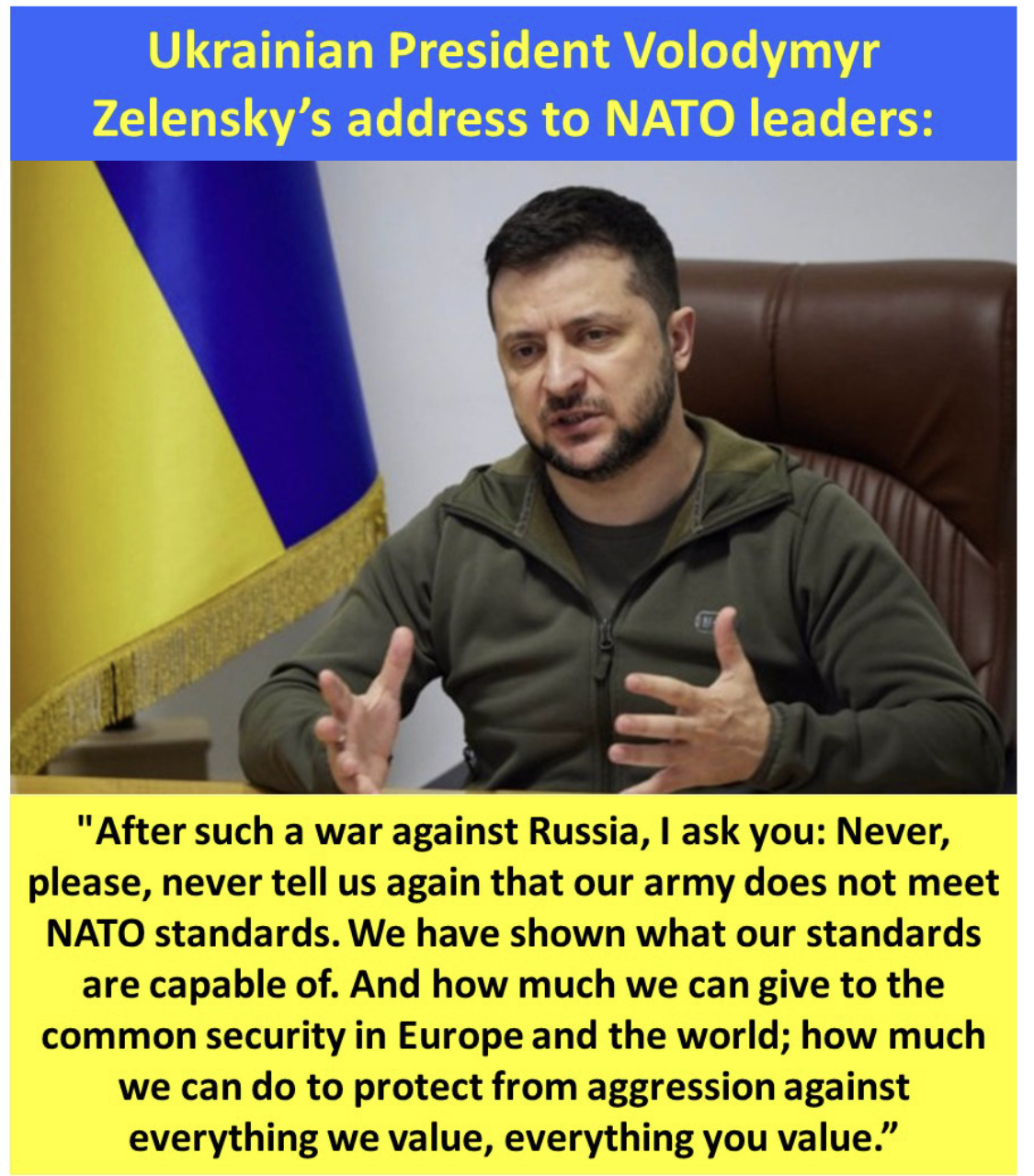 Embassy of Ukraine in the USA

At least 300 innocent lives have been lost as a result of Russia’s missile strike at the Mariupol Drama Theater. Mariupol is on the brink of survival. The number of deaths from starvation is rising.

The occupants launched artillery fire at evacuation train near the town of Vasylkiv, Kyiv region.

Russian forces failed to reach their main goals - the blockade of Kyiv and access to the administrative borders of the Donetsk and Luhansk regions.

Russia is growing its naval fleet in the waters of the Sea of Azov.

Foreign Minister of Ukraine:  No consensus in negotiations yet. Ukraine’s position is clear: ceasefire, security guarantees, no compromises on territorial integrity. But Russia sticks to ultimatums. To stimulate a more constructive approach we need two things: more sanctions and more military aid for Ukraine.

General Staff of the Armed Forces of Ukraine

Russian forces failed to reach its main goals of a large-scale war - the blockade of Kyiv and access to the administrative borders of the Donetsk and Lugansk regions. The enemy has had partial success in creating a land corridor between the temporarily occupied Autonomous Republic of Crimea and part of the Donetsk region.

In the Volyn direction, the enemy has not been active. The probability of involving the armed forces of Belarus in the aggression against Ukraine is estimated as high.

In Polissya, the enemy has not carried out offensive operations. Their efforts have been concentrated on shelling the positions of Ukraine's Armed Forces in the regions of the settlements of Nova Buda, Nalyvaykivka, Ozerchchyna. They are carrying out the movement of units, logistics, and are attempting to gain foothold on the occupied frontiers. Eastern Military District troops have set up a rear area (field camp) in the Chornobyl region.

In the direction of Siversk, the occupational forces continue to hold the previously captured borders, and are attempting to grow their groups and blockade Chernihiv. They continue to shell city's infrastructure.

Advancement in the direction of Brovary has been unsuccessful - the occupants were stopped immediately, have switched to defence and are attempting to gain foothold at their current positions.

In the direction of Slobozhansk Russian forces are concentrating on holding down their positions near Sumy and Kharkiv, are replenishing their losses and continue destroying the cities' residential areas.

In the direction of Donetsk the enemy continues to replenish losses, is re-grouping units. Russian fascists are firing, using artillery and aviation, at the infrastructure of peaceful cities. They are not giving up on the idea of entering the administrative borders of the Donetsk and Lugansk regions.

In the Tavriya direction, in the temporarily occupied territories, preparations for the implementation of an occupation government are taking place. Measures were taken to isolate the railway station of Kherson.

The enemy is growing its naval fleet in the waters of the Sea of Azov. There has been a record of the passage of the small minesweeper "Valentyn Pikul", the missile boat "Naberezhnye Chelny" and two landing crafts, via the Kerch Strait, in the north direction.

Russia is taking measures to restore combat capability, replenish ammunition and fuel to ensure the readiness of offensive operations.

Ukrainian forces involved in the defense of the city of Kyiv continue to repel the enemy's offensive, inflict fire on Russian fascists and hold their positions.

In the temporarily occupied territories of Ukraine, the occupiers continue to terrorize the local population, forcing people to be deported to the territory of the Russian Federation. In order to intimidate the local population, Russian fascists are carrying out chaotic shelling of settlements, confiscating vehicles and personal belongings.

In the temporarily occupied Luhansk, in the local hospital, the occupiers established a military hospital, which is full of wounded servicemen of the Russian Federation. Part of the hospital is set aside for the storage of corpses due to the fact that the local morgues are overcrowded.

The enemy continues to suffer losses among the leadership. On March 25, Ukrainian defenders killed in action the commander of the 49th Army of the southern military district, lieutenant general Yakov Rezantsev.

Russian daily bombings and shelling damaged 566 educational institutions in Ukraine, 73 of which were completely destroyed.

More than 230 schools and 155 kindergartens were damaged and destroyed.

The worst situation is in Donetsk, Kharkiv, Mykolaiv, Sumy, Kyiv, Kherson and Chernihiv. In addition to this, more than 40 children's facilities were affected by the enemy fire, this includes medical and sport facilities, art schools and libraries.

In the evening of 24 March 2022, Russian soldiers shelled Kalynivka village, Kyiv region with multiple rocket launchers. As a result, fuel tanks of the oil depot were destroyed and a fire broke out. The occupants also launched artillery fire at evacuation train near the town of Vasylkiv, Kyiv region.

On 24 March 2022, members of the Russian armed forces shot dead two residents of the village of Velykyi Sambir, Konotop district, in their own yard. A 62-year-old man and a woman died of their gunshot wounds.

Ukraine, Lithuania and Poland have set up a joint investigation team to investigate Russia's war crimes.

The activities of the JIT will focus on the collection, safe storage and rapid exchange of information and evidence of war crimes of the Russian Federation, collected during investigations in the territory of the States Parties, as well as operational and investigative measures. In addition, it will identify the assets of war criminals in order to freeze them.

"Our joint investigation team is open to other participating countries. Currently, in addition to Ukraine, 9 other countries are conducting their own investigations into the war waged by Russia: Lithuania, Poland, Slovakia, Estonia, Germany, Sweden, Latvia, Norway and France. We are also waiting for the Office of the Prosecutor of the International Criminal Court to join our team, the Prosecutor General added.

During the meeting, Lithuanian and Polish colleagues spoke about the steps already taken in their own national investigations. First of all, they worked with witnesses and victims - refugees from Ukraine.

The shelling of the village New-York near the city of Toretsk took the life of a local resident. In the town of Selidove, doctors are helping a wounded resident of the village of Mykolayivka, and in Bakhmut continue to receive citizens who were injured in Popasna, Luhansk region.

Russian troops continue to wage a brutal war against civilians in Ukraine.

In Kharkiv, six civilians were killed and 13 wounded as a result of enemy shelling of the “Nova Poshta” post office, where people were queuing up to receive humanitarian aid.

In Luhansk region, the Russian army shelled a church, houses and a bus: 5 people were killed and 8 wounded. Firefighters rescued 18 residents from under the rubble.

In Mykolaiv Region, the Russian Army launched an attack at civilians from “Smerch” multiple rocket launcher. Three people were killed, 13 injured, one in serious wounded.

An evacuation train №43 Kyiv - Ivano-Frankivsk came under fire near Kyiv. Fortunately, there were no casualties.

In Kalynivka, Kyiv region, three people were injured as a result of shelling. Shell debris hit an oil depot, leading to a large-scale fire.

The occupants used heavy artillery to shell a residential area near Vyshgorod in Kyiv Region. As a result of the shelling, a multi-storey building was damaged.

In Dergachi, Kharkiv Region, one civilian was killed and another wounded after the city center was shelled from a drone.

At least 300 innocent lives have been lost in a missile blast at the Mariupol Drama Theatre.

According to eyewitnesses, it became known that a missile hit the building, killing people inside. That's about 300 civilians along with pregnant women and children.

Today, a damaged and destroyed Mariupol is on the brink of survival. The number of deaths from starvation is rising. People are unable to leave the city to evacuate. More and more are left without any food supplies. All attempts to launch a large-scale humanitarian operation to save the residents of Mariupol are blocked by the Russian side.

Russian officials (M. Myzincev) and the media, in particular TASS, provide information on the deportation of 366,182 Ukrainian citizens from Ukraine to Russia, including 77,062 children (as of March 22, 2022).

“I sent a letter to the Commissioner for Human Rights in the Russian Federation Tatiana Moskalkova with a request to provide me and the Central Investigation Agency of the International Committee of the Red Cross with information about persons displaced from Ukraine.” stressed the Commissioner.

Ministry of Internal Affairs of Ukraine

In Zaporizhzhia police document the consequences of the shelling of civilian houses. According to preliminary data, private houses and other living areas of Orikhov village were destroyed and damaged by artillery shelling and air strikes.

Minister of Foreign Affairs of Ukraine

Some mass media outlets are citing the comments of President of Turkey Recep Tayyip Erdogan on the negotiation process with Russia.

Our country is sincerely grateful to the Turkish side and especially to President Erdogan for their political and humanitarian assistance, as well as diplomatic efforts aimed at ending Russia's war against Ukraine.

At the same time, it is important to evaluate the situation objectively.

There is no consensus with Russia on the four points mentioned by the President of Turkey. In particular, the Ukrainian language is and will be the only one state language in Ukraine.

In general, the classification of key topics of negotiations into four or other points is incorrect. Many different issues are discussed at the same time in the subgroups of delegations.

The negotiation process is very difficult. The Ukrainian delegation has taken a strong position and does not relinquish its demands. We insist, first of all, on a ceasefire, security guarantees, and territorial integrity of Ukraine.

Ukraine will continue its dialogue with Turkey and other stakeholders to restore peace on Ukrainian soil. We hope that Turkey, as a friend and strategic partner of Ukraine, will also continue its support on all tracks.

Taking this opportunity, I would like to remind you that the introduction of new sanctions against Russia and the strengthening of Ukraine's defense capabilities are no less meaningful factors in stopping the Russian military machine and achieving the desired progress in the negotiations.

Such a tripartite strategy - sanctions, military support, negotiations - should not be questioned.

We believe that not some, but all Russian banks should be disconnected from SWIFT, that the EU should impose ban on Russian gas and oil, and to apply many other financial sanctions.

No consensus in negotiations yet. Ukraine’s position is clear: ceasefire, security guarantees, no compromises on territorial integrity. But Russia sticks to ultimatums. To stimulate a more constructive approach we need two things: more sanctions and more military aid for Ukraine.