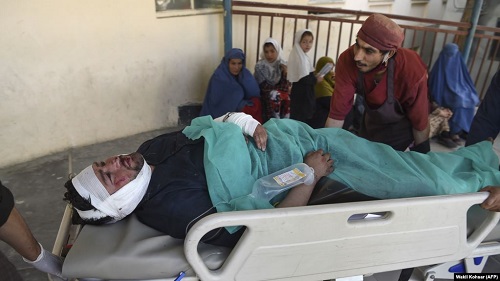 At least 46 people have been killed and dozens wounded in two Taliban attacks in Afghanistan.

At least 24 people were killed and 30 more wounded in a blast near an election rally attended by Afghan President Ashraf Ghani on September 17, but Ghani was unhurt.

Later on September 17, another suicide blast rocked central Kabul, killing at least 22 people and wounding 38 others, according to the Interior Ministry.

Both attacks were claimed by the Taliban.

The militant group has threatened to step up attacks to discourage people from voting in the September 28 presidential election, when Ghani will bid for a second five-year term.

Ghani had just started delivering a speech at the rally in Charikar, the capital of Parwan Province, north of Kabul, when the first attack occurred.

Interior Ministry spokesman Nasrat Rahimi said the bomber had been on a motorbike and had detonated at the first checkpoint leading to the rally.

Abdul Qasim Sangin, head of the provincial hospital, told RFE/RL that 11 of those injured are in critical condition, including women and children.

"Ambulances are still operating, and the number of casualties may rise," Sangin said.

"The president is unharmed," an aide said.

An Afghan official said the blast occurred near an army base and also near the U.S. Embassy.

Security at election rallies across the country has been tight following threats by the Taliban to attack meetings and polling stations.

Peace talks between the United States and the Taliban meant to reach a deal on the withdrawal of thousands of U.S. troops collapsed last week. The talks did not include the Afghan government.