They Know Our Pain

They Know Our Pain

“What are you doing here?”  It was December 2010 and I had just arrived to a dusty and isolated base in southern Kapisa, Afghanistan. Before the dust had settled and I could make my way around the compound, a U.S. Special Forces (SF) soldier had already pulled me aside to question me. I tried to explain the role of human terrain teams and how I would provide operationally-relevant information based on relationships I built with the local population. “But what are you doing here? You have no role here,” he persisted. It was an unexpected welcome, but it would not be a first during my time there. Living on a small military base for several months, I had learned that building a network of trusted local acquaintances and understanding the district where I worked was important to proving my professional worth to the military. But making friends on the base was crucial to maintaining my personal sanity.   I walked away in search of my belongings in this new environment, when Frank, a more senior member of the SF team approached me. He noticed my dismay and when I told him that perhaps I was not needed there and should return to my home base, he asked me to at least give it a chance. That was the beginning of one of my most eye-opening experiences in Kapisa, Afghanistan.

Frank was part of a mixed U.S.-Romanian Operational Detachment Alpha (ODA) team. He and the Romanian captain invited me to spend time on the SF compound and document their support to local security teams, which would roll into the Afghan local police program. After only a few days, I fell into the operational tempo of embedding with the Special Forces. I documented how they trained the teams to provide medical assistance and conduct patrols. I spoke to the Special Police forces and learned about plans for transitioning the base when foreign forces left.

What captivated me the most, however, was the unique bond between U.S. Special Forces and these local Afghan security teams, who risked everything for their families and communities. I accompanied the SF on a full-day mission to finish building a checkpoint for one of the teams and decided to speak to some of the local security team members and learn about their motivations.  I asked the local security team leader what he told locals about his job. He responded: “I tell them that I work with the Special Forces, because they know our pain.” This answer stuck with me, as I contemplated the many meanings of his response. I realized with time that there was an unbreakable bond between the SF and the local security teams. They supported each other, fought side by side and spoke freely and openly to each other.

During the interviews I conducted in the area surrounding the checkpoint, I noticed that one of the local security team members was standing watch next to me the entire time. He introduced himself as Sangeen and said that he would personally guarantee my security. He wore a green and black checkered scarf, which I really liked. While riding with the Special Forces to Bagram some time later, I bought the same checkered scarf from a local vendor at the entrance to the base. With Sangeen, an interpreter and the Romanian captain, I also visited a solitary police checkpoint. It turned out it was only staffed by three policemen, who admitted they relied mostly on the local security team, supported by the SF, for security. I then visited neighboring houses where I was invited to eat pomegranate. The hospitality of the Afghan people I met, all of who were destitute, stunned me. I tried to imagine how they perceived me, a young female foreigner accompanying military forces and taking copious notes while asking about their experiences and opinions on security and development. 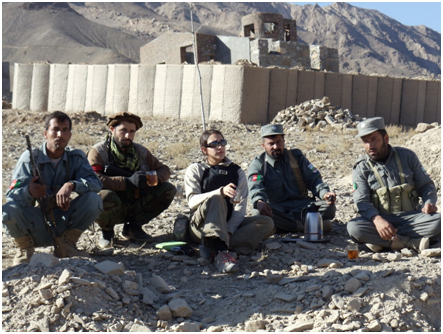 At one point, the three police officers from the checkpoint offered me lunch and tea. We sat on the side of a rocky hill, watching our surroundings and chatting about the security situation. It all seemed surreal. At any moment, we could have come under attack and yet there I was. I felt part of a security community and something greater than myself. It was a long day and we did not return to the compound until it was nearly dinnertime. For the next several days, I wrote reports and met with local leaders in order to map the human terrain in the southern district. The French Brigade I supported requested copies of my reports with great interest, as they would soon transition to work with the same local security teams.

I spent my 25th birthday on the SF compound. Frank surprised me with a cake and we spent the evening talking about what he and another colleague had been doing nearly 10 years earlier when they were my age. I did not stay with the SF much longer as I would be transferring to another base, but the friendship I developed with Frank and other members of the SF sustained me during the transition period. I remember Frank told me that facing difficulties and change is good, because it affords the greatest opportunity to grow.  I now realize the full extent of opportunities for both professional and personal growth that I experienced on a human terrain team.

Many times I faced more challenges gaining the cooperation and support of colleagues than Afghan leaders. I did observe post-traumatic stress disorder (PTSD) in some soldiers and the commitment and dedication of those that fought for ideals greater than themselves. But as a civilian with no prior military experience, it was not always easy to comprehend the reasoning behind actions or decisions. As a civilian, I could get away with speaking frankly and openly about issues without too much concern for rank and hierarchy.  As an analyst, I was able to get close to the local population and serve as a bridge of understanding with the military. There were costs and difficulties, however. My team depended on the brigade for support, freedom of movement and, most importantly, security. Information was the main resource we offered. And sometimes the information we provided was not what people wanted to hear.

Embedding with military forces gave me valuable insight into many things and allowed me to use my language and interpersonal skills to build bonds of trust with the population and to facilitate future cooperation.  Several years later, while working with higher-level officials, I realized how generous the local villagers had been when commenting on my language skills. Many times, it was the children that understood my sometimes incorrect grammar and could decipher for the elders. The Afghan villagers I interacted with were gracious, appreciative and understanding.

My former team leader once compared my demeanor outside the wire to that of another member on our team. He said that while that team member seemed overly concerned and nervous, I seemed carefree and focused on the people I spoke to. I knew that a carefree demeanor could be dangerous by potentially reducing my situational awareness, but I felt that it was important to focus on the people I spoke to, observe their body language and watch their expressions to fully comprehend the meaning of what they were telling me. It might have been partly due to my Iranian heritage, but I always felt a sense of familiarity when speaking to locals.  I was able to quickly develop friendships that went a long way to implement projects.

I also realized the significance of keeping your word in Afghanistan and not promising what you may not be able to deliver. I heard several complaints by Afghans about Americans promising projects or different sorts of aid and for some reason or another none or few of them coming to fruition. One of the most pleasant surprises I experienced occurred about seven months into my first deployment. I was co-leading a project to compensate over 1,200 families whose property had been damaged by US-funded road construction. One day I was overseeing the compensation of several families from one particular valley. An elderly man approached me and showed me his paperwork documenting the damage to his property and telling me that he believed that he had been under-compensated. After I inspected his paperwork, I realized that I had made a mistake and that he should have been compensated more. I spoke to the road contractor and they agreed to correct the mistake. The man was extremely grateful and told me that he would bring me nuts that were local to his village. About two days later, I received notice that I had a visitor at the gate of the base. To my surprise, the elderly man was there, holding a large bag of nuts. Like many of the villagers I met during my deployment, he had walked several miles to meet me at the base. He had kept his word.