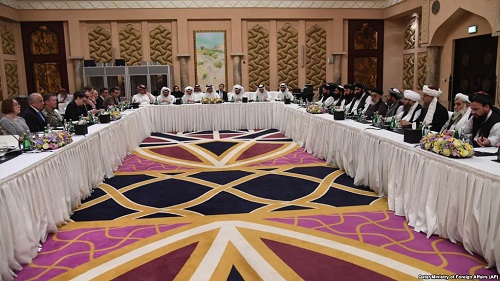 American and Afghan Taliban officials have temporally paused ongoing peace talks in Qatar to consult with their respective leaderships before returning to the table on Saturday.

A spokesman for the insurgent group said Wednesday, during an uninterrupted debate for two days, the "technical groups" from both sides focused entirely on issues related to "complete withdrawal" of U.S.-led foreign forces from Afghanistan. They also focused on the Taliban giving guarantees that prevent terrorists from using Afghan territory for attacks against other nations in future.

Without elaborating further, a member of the insurgent negotiations team said the discussions with U.S. interlocutors were "good and they are heading in the right direction."

"We now have a break in the dialogue for two days to allow each side to conduct internal consultations and seek advice from their respective leaders before we return here and resume the dialogue," Mullah Khairullah Khairkhwah told a pro-Taliban media outlet Wednesday night after leaving the meeting.

The ongoing meeting is the fifth round of talks since late last summer when Washington directly engaged the Taliban in a dialogue that U.S. officials say is primarily aimed at paving the ground for a sustainable intra-Afghan peace process.

Both Taliban and U.S. officials announced after their last meeting in Doha a month ago they had agreed "in principle" on a "framework" of discussions on the issues of foreign troop exit and insurgent counterterrorism assurances.

Khalilzad repeatedly clarified, however, that any final U.S. troop withdrawal plan would be linked to a Taliban cease-fire and the rebel group's direct talks with the government in Kabul. The insurgent group refuses to engage in talks with the Afghan government, though, insisting any discussions on internal Afghan matters must be decided by Afghans themselves.

At an informal session Monday hosted by Qatari officials prior to the formal negotiations, Taliban delegates were introduced to American interlocutors by Mullah Abdul Ghani Baradar, the newly appointed Taliban's deputy chief of political affairs and head of its Qatar-based office.

Baradar arrived in Doha a day before the two sides reconvened for the meeting, and his presence is seen as key to sustaining a productive dialogue with the U.S., according to insurgent officials.

The Taliban leader had been in detention in Pakistan since 2010 when a joint operation by local and U.S. intelligence operatives captured him in the city of Karachi while he was traveling through the neighboring country. He was released last October at the request of Khalilzad, meeting a key insurgent demand.

Baradar is known as a co-founder of the Taliban, and he is considered a highly respected figure in the rebel group. He is credited for organizing the insurgent campaign after the U.S.-led invasion of Afghanistan 17 years ago ousted the Taliban from power. Baradar continues to maintain influence over Taliban battlefield commanders, particularly in southern Afghan provinces, observers say.