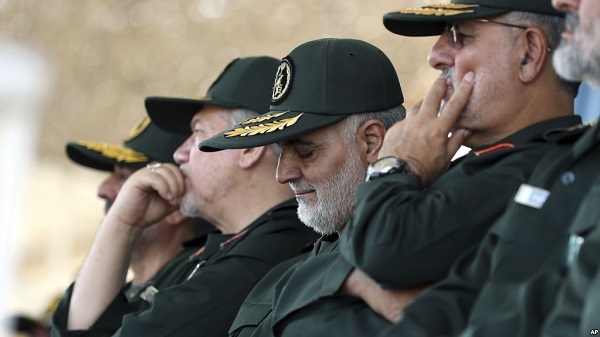 U.S. Secretary of State Mike Pompeo this week described a powerful Iranian military commander as a “terrorist,” while discussing options the U.S. government could have to further punish Iran for its destabilizing activities in the Middle East.

“Qassem Soleimani has the blood of Americans on his hands … as does the force that he leads,” Pompeo said during an interview with Fox News. “America is determined each time we find an organization, institution or an individual that has taken the lives of Americans, it is our responsibility.”

Pompeo said that the IRGC has killed more than 600 American soldiers.

The IRGC uses its elite Quds Force led by Maj. Gen. Qassem Soleimani and proxy Shiite militias to extend its influence across the Middle East and beyond.

As the commander of Quds Force, Soleimani has been a major figure behind Iran’s strategic military planning in the region. He has been responsible for forming and organizing Shiite militias like Hezbollah in Lebanon, the Houthis in Yemen, and various militias in Iraq and Syria.

Soleimani, born in 1957 in the province of Kerman in south-central Iran, rose to prominence during the Syrian civil war, which has been ongoing since 2011, for leading Iranian forces fighting alongside Syrian regime troops.

But Soleimani’s military career began during the Iran-Iraq war in 1980s, where he gained extensive battlefield experience.

The rise of Islamic State (IS) terror group in 2014 offered a new opportunity to the Iranian commander to prove his military effectiveness against IS militants in Iraq and Syria.

While Soleimani has largely kept a low profile, he has been photographed on frontlines, directing major battles against IS militants and Syrian rebels.

He “has certainly benefited from increased media popularity,” said Behnam Ben Taleblu, a senior fellow at the Foundation for Defense of Democracies (FDD), a Washington-based think tank.

Ben Taleblu added that Soleimani has benefited from personal relationships he has forged with powerful figures in the clerical establishment in Iran.

“How he will wield this in coming years, particularly with flashpoints such as the death of the Supreme Leader remain to be seen,” he added.

Iranian Supreme Leader Ali Khamenei called him “living martyr of the revolution” during a ceremony last month, where Soleimani received the Order Zulfiqar, the highest military medal in the Islamic Republic, making him the first Iranian commander to receive the Order after the 1979 Islamic revolution.

Some experts say that Soleimani has already been reaping the fruit of his labor by expanding his political profile domestically and regionally.

“Soleimani does carry a lot of weight in the Iranian government,” said Joshua Landis, director of Center for Middle East Studies at the University of Oklahoma.

“When Bashar [al-Assad of Syria] traveled to Iran earlier this year, Soleimani met with him rather than the foreign minister. It was a photo op, meant to boost moral inside Iran at a time of economic stress and sanctions. But it underlined the accomplishment of Soleimani in helping to win the war in Syria,” he added.

Backed by Iranian and Russian forces, Syrian government troops have removed rebel groups from most areas they controlled at the peak of the civil war, including major provinces like Aleppo, Homs and Daraa.

But analyst Landis said that “now that Syria needs to rebuild in order to stabilize Assad’s government, Soleimani will play a lesser role. Indeed, Syria will try to limit the influence of the Iranian military.”

And with the U.S. designation of the IRGC as a terrorist organization, experts believe that from now on Soleimani could face further challenges in his quest for more power in the Middle East and beyond.