A Short History of the Beloved Colt 1911 Pistol

The History of the Beloved Colt 1911 Pistol 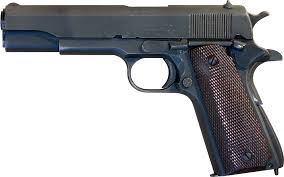 The 1911 pistol is something of a legend. As its names suggests, it was originally developed in 1911, and despite not having changed much since then, it remains a great weapon.

Though produced primarily for military use, the experience of generations of veterans has meant that it has become widely used by civilians as well. In response, almost every major gun manufacturer in America today produces their own version of the pistol, each with their own adaptations and extra features.

To understand why the gun become so popular, and why it is so widely used more than a century after it was first made, I’m going to take a look at the 1911’s history.

The pre-history of the 1911 stretches right back to the 1890s. At that time, a huge variety of revolvers were in use in by the US military, but it was believed that a self-loading pistol was required. The US Army had just adopted two new service rifles (the M1892 and M1895), and wanted a new pistol for use alongside them.

Various trials of self-loading pistols were tried, with the 7.65mm Luger emerging as an early favorite. However, the US experience of fighting Moro guerrillas during the Philippine-American War led to a realization that no handgun then in service was powerful enough for jungle warfare against a foe like the Moros. The specification for the new pistol stated that it should be chambered in “no less than .45 caliber”.

Six manufacturers submitted designs (Colt, Bergmann, DWM, Savage Arms Company, Knoble, Webley, and White-Merrill), and three were eliminated at an early stage. After another series of tests, the Colt design emerged as the winner, not least because of its superior reliability: during one test in 1910, 6 thousand rounds were fired from a single pistol. When it got hot, it was dunked in water to cool it down. Despite this, it never jammed.

The Colt 1911 was formally adopted by the US Army on March 29, 1911, and then by the US Navy and Marine Corps in 1913. By the beginning of WW1, more than 68,000 pistols were in service and the huge demand for the new pistol led to contracts being granted to other manufacturers as well. The pistol performed so well during WW1 that there were no huge changes made to its design. Some external changes were made to make the pistol easier to shoot for soldiers with smaller hands and the sights were slightly altered, but the core mechanics of the pistol remained the same. Accordingly, all the 1911s produced to this date have interchangeable parts.

WW2 saw another huge expansion in demand for the 1911. During the war, some 1.9 million pistols were produced by several manufacturers. The wooden grip was replaced with a plastic one to save money, but apart from this the pistol retained its original design.

Despite already being 30 years old, the 1911 was still one of the best handguns available during WW2, and won many converts. British Commando Troops used them in preference over their standard issue weapons, as did South African Special Forces.

Following WW2, the 1911 continued in service for years to come. It was the standard sidearm for US troops in Korea and Vietnam and despite multiple trials of new pistols it retained its pre-eminent position. It continued to be used in the first and second Gulf Wars, mainly by special forces troops who required as much power as possible in their pistol.

That said, by the 1970s there was serious thought being given to replacing the 1911 in standard service. The types of conflict the US engaged in were changing, and the desirability of using NATO supply chains meant that many felt that a 9mm pistol was a logical way forward. After extensive trials, the Beretta 92F was eventually chosen.

The problem with the new pistol was that it lacked the stopping power of the .45 1911, and this was of special concern for Special Forces troops. Accordingly, the 1911 was heavily modified, bringing it in line with more modern pistols, and continued to be issued (as the MK23 Mod 0) to troops up to the present day.

Despite the 1911 having been largely retired from military use, it is still a very common sight in the US today. The LAPD, SWAT teams, and the FBI continue to use the pistol, normally paired with a commander holster.

Veterans coming home from war owed their life to the 1911 and this spurred its popularity in the civilian market. Today, it is one of the most common weapons among gun enthusiasts in the US. It is especially popular among concealed carry users, because of the single-stack magazine that makes concealing the pistol easier than many other modern handguns.

Additionally, the pistol is prized for its reliability. There is a strange irony in this, because the very reasons that the military eventually retired it from service – its simple design – are precisely the same reasons why many civilian users are now attracted to the pistol. Without the complex systems that characterize more modern pistols, the 1911 remains easy to maintain in the field.

The 1911, despite being more than a century old, shows no sign of disappearing. The continued demand for the pistol, both among civilian users and US Special Forces, led to the US Army Marksmanship Unit developing a new generation of the pistol in 2004, designated the M1911-A2.

In addition, there are now so many 1911s in use worldwide – by everyone from the Greek Army to Bangladeshi Security Forces – that the gun is likely to remain a common sight for years to come. Not bad for a weapon that originally saw service in WW1.