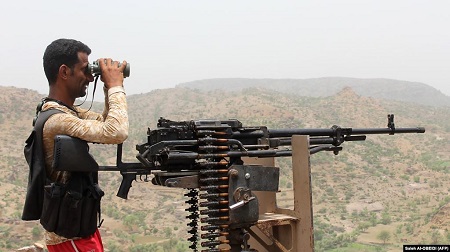 A pro-government fighter on the front line in southwestern Yemen in July 2018.

A series of attacks on Saudi oil facilities has escalated tensions in the region and put Iran's ties with Yemen's Huthi rebels in the spotlight.

But U.S. and Saudi officials have blamed the Huthis' main backer, Iran, for the attacks amid denials by Iranian officials, including President Hassan Rohani, who claims the attacks were carried out by "Yemeni people" in reaction to the devastating civil war in their country in which one side is led by Saudi forces.

U.S. Secretary of State Mike Pompeo said on September 18 that the attacks constituted an "act of war" by Iran and called the Huthi rebels' claim of responsibility "fraudulent."

Saudi Arabia has said the attacks were "unquestionably sponsored by Iran," holding a major press briefing on September 18 replete with the pieces of exploded missiles and other flotsam in an attempt to prove that Tehran was behind the extensive assault.

Relations between Iran and the Huthis have moved closer since 2015 when Iran’s main regional rival, Saudi Arabia, and its allies, conducted a bombing campaign in Yemen in an effort to restore Mansur Hadi's government to power after it was ousted by the Huthis.

Earlier this year, Iranian Supreme Leader Ayatollah Ali Khamenei held a meeting with Huthi spokesman Muhammad Abdul Salam in his residence in the Iranian capital at which Khamenei praised "the resistance" and "jihadi spirit" of the Yemeni people against "a brutal and extensive invasion."

The meeting on August 13 marked the first time Tehran had publicly hosted a senior Huthi official. Just a few days later, the Huthis announced the appointment of an ambassador to Iran.

The Huthis are followers of Zaydi Shi'ite Islam, whose beliefs vary somewhat from those held by the overwhelming majority of Shi'ite Muslims in Iran.

But relations between the two have moved closer in recent years due to the Yemeni war, a common enemy in Sunni Muslim Saudi Arabia, and a rejection of the dominant U.S. regional order, says Thomas Juneau, an associate professor at the Graduate School of Public and International Affairs at the University of Ottawa. He describes relations between the two as "very pragmatic."

"Iran sees a nonstate actor which it can support -- this helps it gain influence in Yemen and pressure Saudi Arabia," Juneau says.

"The Huthis are equally pragmatic: faced with a military onslaught by the far more advanced Saudi military, no other external actor would have been willing to support them so much," he adds.

Farea al-Muslimi, the chairman and co-founder of the Sana'a Center for Strategic Studies and associate fellow at the Middle East and North Africa Program at Chatham House, wrote in 2017 that the war in Yemen made the relationship between Iran and the Huthis "more essential."

"To Iran, the Huthis have not, in fact, been much of strategic allies, but they could rather be perceived as the least costly, yet the closest, middle finger that could be raised against Saudi Arabia from its own backyard," Muslimi wrote.

Iran has in recent years provided the Huthis with arms, missile parts and drones, as well as intelligence and training, analysts and U.S. officials say.

Tehran has denied it is arming the Huthis amid reports of Iranian weapons' shipments bound for Yemen being intercepted and concern by U.S. officials about Iran’s Islamic Revolutionary Guards Corps (IRGC) training the rebels to use advanced weaponry.

"It is clear that this [Iranian] support has steadily increased over the years, but its level should not be exaggerated, as many Iran hawks in the U.S. and elsewhere do," Juneau says.

"The Huthis are partners of Iran, albeit the lesser partner. They do not execute Iran's orders. But because the two share common interests, the Huthis will absolutely work with Iran on specific actions when it suits its interests," he said.

Juneau says the majority of Huthi weapons are believed to have come from Yemen, either from the black market or looted from Yemeni Army bases.

"That said, it is increasingly clear that the Huthis' most advanced weapons -- drones and some missiles -- were either fully obtained from Iran or were enhanced thanks to Iranian parts and assistance," he adds.

A 2018 study of the Huthi military by analyst Michael Knights showed that the Huthis have debuted a range of advanced weapons systems since 2015 with direct assistance from Iran.

"The clearest example of this is the Burkan 2-H medium-range ballistic missile, which the Huthis have used since May 2017 to strike [the Saudi capital city of] Riyadh and Yanbu, around 600 miles (965 kilometers) distant from launch points in northern Yemen," the study said.

The study also said there was strong evidence suggesting that Iran and the Lebanese Islamist group Hizballah have jointly developed powerful military and technical advisory missions in Yemen since 2014.

The Huthis have stepped up their attacks on Saudi targets in recent months, launching scores of drone and missile attacks on airports, power stations, oil and gas fields, and tankers. The rebels have also claimed attacks in the neighboring United Arab Emirates.

The scope, sophistication, and precision of the September 14 attacks on the heart of Saudi Arabia's oil facilities -- believed to have been conducted with a combination of drones and cruise missiles -- has led U.S. officials and analysts to suggest that Tehran is behind the attacks.

Whether or not Iran directed the attacks, one thing is clear: they have heightened already simmering tensions between Washington and Tehran, raising fear about the risk of a direct military conflict.

Bruce Riedel, a former longtime CIA officer and the director of the Intelligence Project at the Brookings Institution, warned in 2017 that Iran and the Huthis were playing with fire.

"If a missile hits Riyadh, Jeddah, or Abu Dhabi and kills dozens or more, the pressure for retaliation against Iran will be significant," Riedel wrote.

Iran has said that it will "immediately" respond to any attack, while warning that its response would not be limited to the source of the threat.

Trump suggested on September 18 that there were "many options" short of war that the United States could use to retaliate against Iran. "There's the ultimate option and there are options that are a lot less than that. And we'll see," he told reporters.