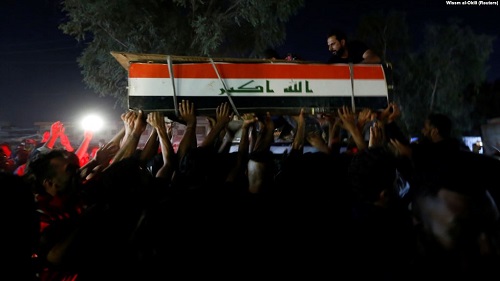 A top United Nations official condemned violence related to protests in Iraq, saying that “this must stop” after the reported five-day death toll surged to near 100 people.

"Five days of reported deaths and injuries; this must stop," Jeanine Hennis-Plasschaert, the special representative of the UN secretary general in Iraq, said in a tweet on October 5.

"I call on all parties to pause and reflect. Those responsible for violence should be held to account. Let the spirit of unity prevail across Iraq," she said, adding that she was "deeply saddened by the loss of life."

The Iraqi parliament's human rights commission said that 99 people have been killed and some 4,000 injured since October 1 since antigovernment protesters angered by high unemployment and worsening living conditions took to the streets, first in Baghdad and then in the Shi’ite Muslim-majority south of the country.

The move has expanded into broader protests calling for an end to official corruption and a change of government.

Prominent Iraqi Shi’ite cleric Moqtada al-Sadr on October 4 called for the government to resign and for early elections.

Sadr said in a statement that the "government should resign and early elections should be held under UN supervision" to avoid further violence.

Iraqi Prime Minister Adel Abdel Mahdi, who came to power a year ago as a consensus candidate vowing to push through reforms, has said he recognizes protesters’ unhappiness with the current situation, but he asked for more time to implement his reform agenda.

Iraqi leaders called an emergency session of parliament on October 5 to discuss the protesters' demands, but the lack of a quorum due to a boycott called by Sadr prevented progress.

The authorities lifted a round-the-clock curfew at 5 a.m. on October 5 to allow shops to open and traffic to flow in most of Baghdad. Authorities had imposed the curfew in an effort to block demonstrations, but it was largely ignored by protesters.

Amid the unrest, masked gunmen stormed the office of three TV news stations in the capital.

Gunmen wearing black clothes broke into the offices of Al-Arabiya, a Saudi-owned pan-Arab news channel, beat up some of the employees and smashed equipment before fleeing, said Majed Hamid, the channel's Baghdad correspondent.

Gunmen also stormed the offices of the privately owned Dajla and NRT news channels, staff at the stations said.

Iraq has a population of nearly 40 million people and is the fifth-largest oil producer and exporter worldwide, but overall poverty rates are estimated to be above 20 percent of the population.

Youth unemployment stands at 25 percent, twice the overall rate, in the country, which has suffered through decades of war and is trying to balance its relations with the United States and Iran.

Washington and Tehran, bitter rivals with each other, both provide crucial aid to the government in Baghdad.