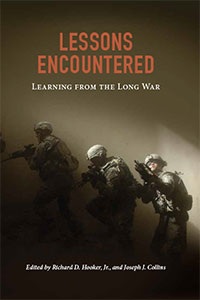 Lessons Encountered: Learning from the Long War began as two questions from General Martin E. Dempsey, 18th Chairman of the Joint Chiefs of Staff: What were the costs and benefits of the campaigns in Iraq and Afghanistan, and what were the strategic lessons of these campaigns?

The Institute for National Strategic Studies at the National Defense University was tasked to answer these questions. The editors composed a volume that assesses the war and analyzes the costs, using the Institute’s considerable in-house talent and the dedication of the NDU Press team. The audience for this volume is senior officers, their staffs, and the students in joint professional military education courses—the future leaders of the Armed Forces. Other national security professionals should find it of great value as well.

The volume begins with an introduction that addresses the difficulty of learning strategic lessons and a preview of the major lessons identified in the study. It then moves on to an analysis of the campaigns in Afghanistan and Iraq from their initiation to the onset of the U.S. Surges. The study then turns to the Surges themselves as tests of assessment and adaptation. The next part focuses on decisionmaking, implementation, and unity of effort. The volume then turns to the all-important issue of raising and mentoring indigenous security forces, the basis for the U.S. exit strategy in both campaigns. Capping the study is a chapter on legal issues that range from detention to the use of unmanned aerial vehicles. The final chapter analyzes costs and benefits, dissects decisionmaking in both campaigns, and summarizes the lessons encountered. Supporting the volume are three annexes: one on the human and financial costs of the Long War and two detailed timelines for histories of Afghanistan and Iraq and the U.S. campaigns in those countries.

The lessons encountered in Afghanistan and Iraq at the strategic level inform our understanding of national security decisionmaking, intelligence, the character of contemporary conflict, and unity of effort and command.

They stand alongside the lessons of other wars and remind future senior officers that those
who fail to learn from past mistakes are bound to repeat them.

A. THE HUMAN AND FINANCIAL COSTS OF OPERATIONS IN AFGHANISTAN AND IRAQ
Sara Thannhauser and Christoff Luehrs