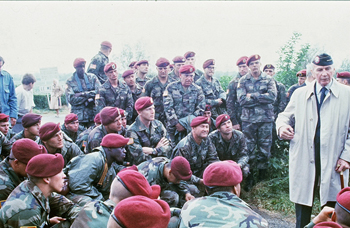 The Normandy invasion was perhaps the riskiest and most important operation civilization has ever undertaken.  The leaders knew it and their troop commanders were exquisitely sensitive to the point-they could not fail.  They had to succeed.  One of those leaders understood the core of commanding in combat.

The youngest brigadier general in the army, Jim Gavin, was the newly appointed assault force commander for the 82d Airborne Division-one of the key spearhead Airborne divisions to land in Normandy before the main force and to hold until relieved.  Prior to this, he had joined the 505 PIR at Ft Benning as a Captain and followed it through to command the entire Regiment in Sicily and Salerno.  He had a well-earned reputation as an effective combat commander.  Most importantly, he had the deep love and respect of his soldiers.  He truly was a leader worthy of the led.

On a cold, wet day in England, he demonstrated the essential necessary quality of any first tier combat commander.  In so doing, he further cemented his soldiers and provided the undefinable will, purpose and resolve that would see each through the coming conflict in one of the most confused and risky battlefields in which they ever would fight.

General Gavin had been appointed by the division commander, MG Ridgway, a formidable soldier in his own right, as the assault force commander for the entire division.  General Ridgway would follow in the morning-approximately six hours after the initial parachute insertion.  To this point, the actual objective area was withheld from the general troop body.

The troops knew they were going to France.  But Where, When and How remained a mystery and subject of scuttlebutt.  Until this day - less than two weeks before the assault.

It was important to both Gavin and Ridgway that the troops hear from their leadership-top down-on what their fate would be.  It would not be passed by paper, mimeographs and telegrams.  The human leadership would lead. 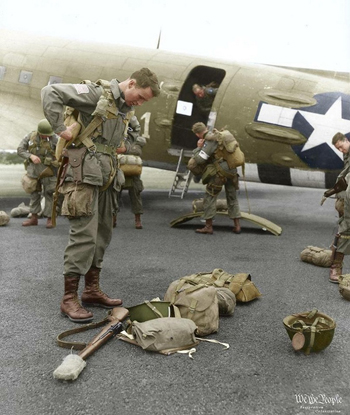 Gavin’s plan was simple and borne by his previous experience.  Soldiers want to see the man who will spend their souls.  He had spent his time in combat up front at the toughest places at the toughest times.  To his soldier’s, he was a force of nature and one of them.  Where he led, they would assuredly follow.  He would talk to them-face to face-just as he had done at Biazza Ridge, across the many hot and dusty roads and villages of the grinding combat of Sicily and the tense beachhead at Salerno with German armor staring them down. He was one of them and would communicate as he had always done when it truly counted-face to face and close.

Each regiment, on schedule, assembled in an open area.  Treated to the cool and misty English weather, the battalions stood close together in parade formation.  He arrived in his jeep and parked close to the troop center of mass.  He mounted the hood of the jeep and commanded all to gather around him.

In a minute, 1,000 plus Airborne soldiers were gathered around as closely packed as humans could be.  They had the studied anxiety and interest of veterans and knew now, with this man, the answers to their key questions.  All else would follow.  Those that were there described it as a moment as quiet as a thousand held breaths could bring.

Looking at the sea of faces, he said in a clear parade ground voice that easily carried to the furthest ranks;

“I am not sending you to Normandy.  I am leading you there.”

With this simplest yet most eloquent statement, each of his soldiers knew they wanted to go, who they wanted to go with and that they would win.  That is a gift beyond price for any leader and for his men.  The many would be one and we would win.