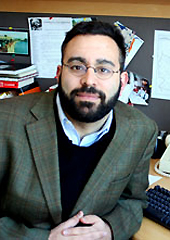 From the Human Terrain System,

It is with deep sorrow that we must inform you of the tragic death of Michael Bhatia, our social scientist team member assigned to the Afghanistan Human Terrain Team #1, in support of Task Force Currahee based at FOB SALERNO, Khowst Province.

Michael was killed on May 7 when the Humvee he was riding in was struck by an IED. Michael was traveling in a convoy of four vehicles, which were en route to a remote sector of Khowst province. For many years, this part of Khowst had been plagued by a violent inter-tribal conflict concerning land rights. Michael had identified this tribal dispute as a research priority, and was excited to finally be able to visit this area. This trip was the brigade's initial mission into the area, and it was their intention to initiate a negotiation process between the tribes.

Michael was in the lead vehicle with four other soldiers. Initial forensics indicate that the IED was triggered by a command detonated wire. Michael died immediately in the explosion. Two Army soldiers from Task Force Currahee were also killed in the attack, and two were critically injured.

During the course of his seven-month tour, Michael's work saved the lives of both US soldiers and Afghan civilians. His former brigade commander, COL Marty Schweitzer testified before Congress on 24 April that the Human Terrain Team of which Michael was a member helped the brigade reduce its lethal operations by 60 to 70%, increase the number of districts supporting the Afghan government from 15 to 83, and reduce Afghan civilian deaths from over 70 during the previous brigade's tour to 11 during the 4-82's tour.

A copy of Colonel Schweitzer's comments can be found at the Human Terrain System web page.

We will remember Michael for his personal courage, his willingness to endure danger and hardship, his incisive intelligence, his playful sense of humor, his confidence, his devoted character, and his powerful inner light. While his life has ended, he has not disappeared without a trace. He left a powerful effect behind, which will be felt by his friends and colleagues and by the people of Afghanistan for many years to come.

"The program has a real chance of reducing both the Afghan and American lives lost, as well as ensuring that the US/NATO/ISAF strategy becomes better attuned to the population's concerns, views, criticisms, and interests and better supports the Government of Afghanistan."

While assigned to the 4th BCT, Bhatia brought a critical skill and wealth of knowledge to his support of the mission in Afghanistan. He developed this knowledge, not only as an academic, but also as a humanitarian and researcher in areas such as East Timor, Kosovo and the Sahrawi refugee camps of western Algeria.

HTS is a program run by the U.S. Army Training and Doctrine Command (TRADOC). Its purpose is to improve brigade and division commanders' level of understanding of the highly complex local socio-cultural environment in areas where U.S. Army troops are deployed.

"Our deepest sympathy and heartfelt prayers go out to Michael Bhatia's family and friends," said Gen. William S. Wallace, TRADOC's commanding general. "Michael is a hero. The Army didn't go looking for him to ask him for his service -- he came looking for us because he was committed to make things better. Our nation is better, as are the people of Afghanistan, because of his devotion and brilliance. He will not be forgotten."

Bhatia was a leading academic and lecturer in conflict and international relations who realized that his vast experience and cultural knowledge could be a critical asset to the Army in operations surrounding Afghan villages and provinces. A 1999 doctoral candidate in the Department of Politics and International Relations at the University of Oxford and a George C. Marshall Scholarship recipient in 2001, his hope was providing assistance in creating a better quality of life for the local population while decreasing the level of lethal operations within the 4th BCT area of responsibility.

"Michael Bhatia's efforts empowered the achievement of peace and stability among local populations without a reliance on force alone as the principle means," said Steve Fondacaro, HTS project manager. "He didn't merely write about it or talk about it, he just did it. And there are very many Soldiers and civilians who are alive today and together with their families because of it."

As a civilian and as an academic, Bhatia lived the Army values of personal courage, loyalty, duty and respect. His accomplishments and contributions will be felt for many years to come.

The Cost of Being There - Complex Terrain Laboratory

In Memory of Michael Bhatia - Coming Back to Kabul