“Islamist Insurgents on the Defensive: Al Qaeda and the Islamic State in 2016—A Small Wars Journal Anthology” 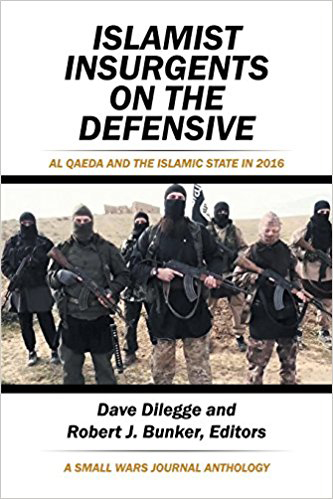 This work is the fourth Small Wars Journal anthology focusing on radical Sunni Islamic terrorists and insurgent groups. It covers this professional journals writings for 2016 and is a compliment to the earlier Global Radical Islamist Insurgency anthologies that were produced as Vol. I: 2007-2011 (published in 2015) and Vol. II: 2012-2014 (published in 2016) and Jihadi Terrorism, Insurgency, and the Islamic State spanning 2015 (published in 2017). This anthology, which offers well over 900 pages of focused analysis, follows the same general conceptual breakdown as the earlier works and is divided into two major thematic sections one focusing on Al Qaeda and Islamic state activities in 2016 and the other focusing on US-Allied policies and counterinsurgent strategies.