Joe Byerly, From the Green Notebook 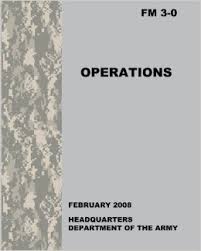 Have you ever read an Army Field Manual and wished you could have added your two cents prior to it accumulating dust on your office shelf? Here’s your chance.

The Strategy Bridge, The Military Leader, and From the Green Notebook are excited to announce that beginning on May 14th we are hosting a three week series focused on the current Draft of Field Manual (FM) 3-0: Army Operations. Each week one of our sites will post a question or series of questions on our Facebook pages for discussion. Answers and feedback will be sent directly to the authors of FM 3-0 for consideration.

The Army Chief of Staff (CSA) asked Training and Doctrine Command and the Combined Arms Center to write a new FM 3-0 to address, in a comprehensive fashion, how the Army conducts operations in an operational environment where the prospect of large scale combat against a capable regional peer adversary is no longer unthinkable. The CSA determined that the Army lacked adequate doctrine to account for large scale combat operations in a multi-domain environment, what happens during operations short of large scale combat, and how to exploit tactical success by consolidating gains to achieve enduring results.

As a result, the Army has developed a Field Manual that is organized according to the Army’s strategic roles as part of the joint force: Operations to Shape, Operations to Prevent, Operations to Win (offense and defense), and Operations to Consolidate Gains. All operations are conducted for a purpose that should inform what the Army does – and how. Field Manual 3-0 makes adjustments to the operational framework and how the Army thinks about it, and that the most likely paths to victory during operations are in the context of current force structure, capabilities, and threats. The authors argue that all combat is multi-domain, and has been for a long time. What is new is how we account for cyberspace and the dynamic information environment, and the idea of orchestrating and synchronizing capabilities across multiple domains to converge effects against an opponent. The Army has significant capability gaps against some potential opponents in some parts of the world, which is why we specify that current adversaries are regional peers. How the Army solves tactical problems will vary from theater to theater, but the one constant is that regional peers can contest U.S. land, air, space, maritime, and cyberspace capabilities in ways we’ve not dealt with in Iraq and Afghanistan. The Army can no longer depend upon the Joint Force to solve its tactical problems. A company or battalion that goes to ground for more than a few minutes after making contact with the enemy, waiting on airstrikes against an enemy with viable IADS and fires complexes, is likely to be destroyed. This is an old problem for Cold Warriors, but it is a new problem for those without those formative training experiences. There are few with that experience in our divisions and brigades now; almost none in our battalions.

Download the Draft FM 3-0 chapters here and come join the conversation at our Facebook pages over the coming weeks.

May 28: From the Green Notebook Posts Questions for Chapters 6-8