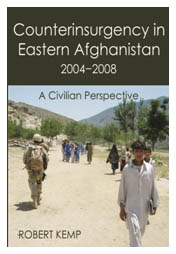 A civilian’s perspective on our COIN efforts in Eastern Afghanistan. The author wrote this book for field grade officers, be they military, State or AID (or NGO and international organizations, for that matter).

After the 2001 ouster of the Taliban from Afghanistan, the United States and its allies found themselves in a country devastated by a series of wars. This book looks at how, working with their Afghan counterparts, they engaged in a complex effort to rebuild security, development, and governance, all while fighting a low-intensity war. "Robert Kemp's candid account of the joint efforts of American military officers and civilians to help local government officials and ordinary citizens in remote, often dangerous areas to reconstruct their war-torn country is a valuable contribution to our understanding of American achievements and failures in Afghanistan. It also usefully illustrates how 21st-century challenges have greatly widened the range of activities our diplomats must pursue."

"Robert Kemp's Counterinsurgency in Eastern Afghanistan 2004-2008: A Civilian Perspective is a must-read for all those following developments in Afghanistan since 2001. The book succeeds both as thoughtful analysis and as a practical guide for military and civilian personnel in the field. Perhaps its greatest value is that the approach taken is relevant not only for Afghanistan but also for other regions of the world where similar conditions exist."