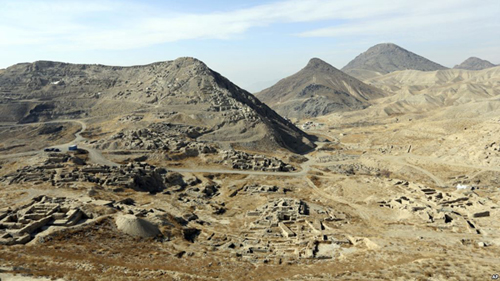 A general view of Mes Aynak valley, 40 kilometers (25 miles) southwest of Kabul, Afghanistan. The Afghan government is trying to grab President Donald Trump’s attention by dangling its massive, untouched wealth of minerals, including lithium, the silvery metal used in mobile phone and computer batteries considered essential to modern life. There are also deposits of coal, copper and rare earth elements.

What does a president who campaigned on an "America First" foreign policy do with the longest war in U.S. history? That is the dilemma for Donald Trump as the White House conducts a policy review of Afghanistan, where U.S. troops have fought for nearly 16 years.

With Trump skeptical of committing more troops to what some see as an unwinnable war, one idea has come to the forefront: using Western companies to extract Afghanistan's vast, untapped mineral deposits.

How much is there? A 2010 U.S. study estimated more than $1 trillion worth of untapped mineral deposits, but Afghanistan's violence, corruption and poor infrastructure would make mining extremely difficult.

That's part of the reason why, although U.S. officials have discussed using Afghanistan's mineral wealth to bolster the government and economy, the plan has not gone anywhere.

There are also concerns about whether such a move would feed into the Taliban narrative that the U.S. military is only in Afghanistan because it wants to plunder the country's natural resources.

Still, Trump appears to be interested in using Afghanistan's minerals as a selling point for continued U.S. military engagement.

A recent New York Times report said Trump had spoken about mineral deposits with Afghan President Ashraf Ghani, who is also open to the idea.

White House officials declined to comment on the story, citing the ongoing policy review. But Afghan officials confirmed to VOA they were expecting a U.S. envoy for talks on mines.

“We have received information about the U.S. delegation,” Abdul Qadeer Mutfi, a spokesman for the Afghan Ministry of Mines and Petroleum, told VOA’s Afghan service. “We are working on an orderly mechanism of attracting foreign investments.”

The idea is consistent with Trump’s long-standing practice of linking U.S. military intervention to the exploitation of natural resources.

Trump has lamented for years that the U.S. did not “keep the oil” when it invaded Iraq in 2003.

After Islamic State seized oil fields in Iraq and Syria, Trump felt his views were vindicated, and his "take the oil" mantra eventually became a standard part of his presidential campaign speeches.

The rhetoric continued during his early days in office. In a speech to CIA employees a day after becoming president, Trump spoke positively of the phrase "to the victor belong the spoils."

It's not clear how to reconcile those comments with Trump's at times heated criticism of costly U.S. wars overseas, or his opposition at times to the U.S. conflict in Afghanistan.

More recently, Trump has been said to be skeptical of a proposal by U.S. military generals to boost the number of troops in Afghanistan in a bid to regain Taliban territory.

Sebastian Gorka, a deputy assistant to Trump for national security issues, declined to comment on whether the president was looking into mineral extraction in Afghanistan.

When asked more broadly whether the Trump administration intended to make foreign policy decisions based at least in part on the exploitation of natural resources, Gorka said that was a "gross oversimplification."

"Look, geopolitics are completely intertwined with geoeconomics," Gorka told VOA. "The idea that you can disconnect economics from national security in the age of a globalized market … that is a very dangerous assertion to make.

"The president can speak for himself, but would you prefer to have groups like ISIS profiting from things like oil wells in Iraq? We've seen the cost of that, which led to slave markets, mass destruction and hundreds of thousands of people killed in Syria," he said.

If Trump did decide to prioritize the extraction of Afghanistan's minerals, the plan would face a dizzying number of challenges, including ongoing violence, regional competition from countries like Russia and China, and government corruption.

While Afghanistan has cleaned up its governance in recent years, it still ranks among the 10 most corrupt countries in the world, according to an annual index by Transparency International.

Without substantial governance reforms, any decision to press ahead with mining in Afghanistan "will likely backfire, possibly creating even more infighting in the Afghan government," according to Global Witness, a human rights group that has studied the issue.

The country also lacks the infrastructure needed to manage such massive projects, said Ahmad Shuja, a former Afghanistan researcher for Human Rights Watch who now works at the American University of Afghanistan.

"There's very limited national grid. So you'll have to develop your own electricity, you'll have to create your own roads, bring your own security teams. All of those are essential barriers to entry issues," he said.

Ghani is aware of these obstacles, which is why he has paused many of the mining development projects and is reviewing the country's mineral law that would govern them, Shuja said.

"But in the short term, I think this is a really smart pitch to President Trump," he said. "It plays to his business sensibilities."

If it's done correctly, it could help the Afghan people, said Aimal Faizi, an aide to former Afghan President Hamid Karzai.

"Generally, it is a good idea in the relations between the two countries," Faizi said. But in a country like Afghanistan, "where the government does not have control of its land or air," anything is possible, he said, "including looting."

Trump himself has been fairly quiet on Afghanistan. He barely mentioned it during the campaign.

Since becoming president, one of his most substantive comments on Afghanistan came this month, during a luncheon with U.S. service members who had fought in the country.

"I want to find out why we've been there ... how it's going and what we should do in terms of additional ideas," he said.