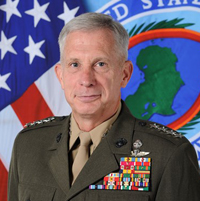 The general said more than 50 defense chiefs have been invited to discuss, among other things, global violent extremist organizations and country responses to them.

“We're very interested in listening to our African partners,” he said, including their concerns and what they’d like to see more or less of from Africom, and to give them an opportunity to come together and share their thoughts and ideas.

During the briefing, Waldhauser discussed the situation in Somalia and Libya, and the effect the Islamic State of Iraq and Syria has had on the African continent.

On Somalia, Waldhauser said the most pressing issue in that country for the new president, Mohamed Abdullahi Mohamed -- known as Farmajo -- is an ongoing famine affecting 6.2 million people there.

The famine and the movement of people in large masses, he said, affects Africom counterterrorism operations against the group al-Shabab and Africom’s efforts to build up Somali national security forces.

The country, which has been without a national government for more than 20 years, must demonstrate, Waldhauser said, that it can assist the nongovernmental organizations and the U.S. State Department and the U.S. Agency for International Development who are postured to take on humanitarian efforts.

“We've offered our help,” the general said, “but so far have not been asked to contribute.”

On the counterterrorism fight in Somalia, Waldhauser said, “I think it’s fair to say that our ability to strike al-Shabab targets will have an impact on [the new government’s] ability to continue what they're trying to do. With the new government … we have an opportunity to move forward.”

The new president is a dual Somali-U.S. citizen who worked in Buffalo, New York, for about 10 years, earned a master’s degree from the University of Buffalo and was a former prime minister in Somalia, the general said.

“[Farmajo] understands it's important to pay the military, he understands what corruption does and does not do for the federal government,” Waldhauser added, “so we have a great opportunity to work with him … because the strategy inside Somalia, our continuation of [counterterrorism] operations, specifically against al-Shabab is a big part of our strategy.”

For the terrorist group, the new government may force a decision, he said.

“Does al-Shabab want to continue to try to attack, attack, attack?” Waldhauser said. “Do they want to try to figure out how they can perhaps reconcile with the new government? And what are their capabilities vis-a-vis what the African Union Mission in Somalia is trying to do [and] the … Somali National Security Forces?”

The terrorist group continues to attack in the Mogadishu area to demonstrate that the new federal government is weak and can’t … break their -- their cycle of violence, he added, “so I think that it's important that we stay after al-Shabab.

Waldhauser began with ISIS, noting that countries with weak, unstable or no governments are a breeding ground for groups like them, and that remaining members of ISIS had not left Sirte after a U.S. air strike on ISIS training camps there on Jan. 18.

The general said that in the western part of Libya, where most of Africom’s operations take place, there may be 100 to 200 ISIS fighters.

“The point is, and the trend line is, the numbers are down ... and [the ISIS fighters’] ability or desire to occupy real estate is probably not there,” Waldhauser said. “They're probably in small groups, they're staying off the communication lines, they don't want to surface and talk, they're just trying to maintain a presence because they don't want to leave.”

Despite all the different factions inside Libya, whether it’s the Government of National Accord, the Libyan House of Representatives or one of the many Libyan militias, the general said, “one thing that unites pretty much everybody in Libya … is the idea that no ISIS is wanted inside Libya.”

Africom continues to develop intelligence even after Sirte and the 18 Jan. strike, he said, “and we continue to watch, we continue to observe, and if asked by the Government of National Accord for assistance again, we'll provide that.”

Waldhauser said that if ISIS in Iraq and Syria is seen as “core ISIS,” then a good way to characterize ISIS on the African continent is “global ISIS.”

The general said Africom’s job is to make sure that those organizations, whether they’re affiliated with ISIS, al-Qaida or terrorist or insurgent groups, “stay internal to those countries or internal to those regions and that they don't grow beyond them,” moving into Europe or moving into the U.S. homeland.

“One of the things we try to do right now by, with and through our partners, he added, “ … is to make sure that our pressure on the violent extremist organization networks keeps those problems tamped down.”

Am I the only reader surprised this invitation has not been issued before now? One wonders how many of the fifty invited will attend.

Meantime via Twitter there is a map that shows another side to the problems Africa has: http://africacenter.org/spotlight/acute-food-insecurity-conflict-africa/