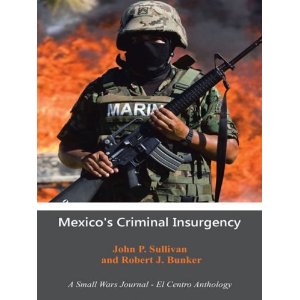 In sum, this anthology represents some of the best and brightest scholars of today who are writing on the evolving security environment in Mexico and the implications this may hold for the United States. They have greatly enhanced our understanding of crime wars and criminal insurgencies-21st century war and conflict waged by non-state entities- and the impact this new form of warfare is having on states. For this, we embrace them and have established the new SWJ El Centro forum to further promote their professionalism and scholarship.


John P. Sullivan, Senior Fellow with SWJ El Centro, is a career police officer. He currently serves as a lieutenant with the Los Angeles Sheriff's Department. He is also a Senior Research Fellow at the Center for Advanced Studies on Terrorism (CAST) and Adjunct Researcher  at the Scientific Vortex Foundation in Bogotá, Colombia. His current research focus is the impact of transnational organized crime on sovereignty in Mexico and elsewhere. Collaborative works include Global Biosecurity: Threats and Responses (Routledge, 2010) and Countering Terrorism and WMD: Creating a Global Counter-Terrorism Network (Routledge, 2006).

Dr. Robert J. Bunker, Senior Fellow with SWJ El Centro, is a past senior officer of the Counter-OPFOR Corporation. He is currently adjunct faculty with the School of Politics and Economics, Claremont Graduate University and an instructor with the Los Angeles High Intensity Drug Trafficking Area (LA HIDTA). He has over two hundred publications, including edited and co-authored books, and specializes in terrorism, homeland security, and international security. Collaborative works include Criminal Insurgencies in Mexico and the Americas (Routledge, 2012), Narcos Over the Border (Routledge, 2011), Criminal-States and Criminal-Soldiers (Routledge, 2008), and Networks, Terrorism, and Global Insurgency (Routledge, 2005).