On 9/11 Anniversary, Trump Vows To Hit Taliban 'Harder’ Than Ever

On 9/11 Anniversary, Trump Vows To Hit Taliban 'Harder’ Than Ever 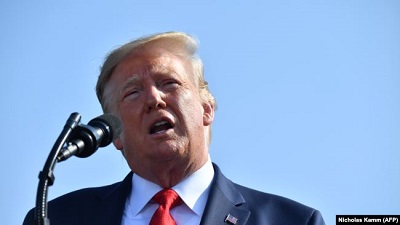 U.S. President Donald Trump speaks at a ceremony marking the 18th anniversary of the 9/11 attacks at the Pentagon in Washington.

U.S. President Donald Trump has pledged to hit the Taliban "harder" than ever, as the United States marked the 18th anniversary of the September 11, 2001 terrorist attacks that ushered in the war in Afghanistan.

Trump spoke on September 11 at a Pentagon event honoring the nearly 3,000 people killed in the attacks, just days after he announced that peace talks with the Taliban were "dead."

In the last four days, U.S. forces have "hit our enemy harder than they have ever been hit before and that will continue,” he said.

The president also warned militants against ever carrying out an attack in the United States again.

The U.S. military response would be such that "they will never have seen anything like what will happen to them,"’ Trump said, noting that he was not referring to the use of nuclear arms.

The president’s comments came as Ayman al-Zawahiri -- the leader of the Al-Qaeda terrorist network that carried out the 2001 attacks on U.S. soil -- in a video recording called for assaults on “the interests of Israel and its American, British, French, Russian, and European allies.”

Zawahiri was named the head of Al-Qaeda in 2011 after Osama bin Laden was killed by U.S. special forces in Pakistan. The Egyptian is believed to be hiding in the country's tribal areas near the border with Afghanistan.

In his remarks on September 11, Trump reiterated that he had called off the peace negotiations with the Taliban last week because of a car bombing carried out by the militant group in Kabul that killed a U.S. soldier and 11 other people.

After nine rounds of talks with the Taliban in Qatar to end the 18-year war, U.S. peace envoy Zalmay Khalilzad had said he had reached an agreement “in principle” with the militants.