The Chibok Kidnappings in North-East Nigeria: A Military Analysis of Before and After

The Chibok Kidnappings in North-East Nigeria: A Military Analysis of Before and After

As Army Headquarters (AHQ) assumed operational oversight from Defence Headquarters (DHQ) later in 2013, the Nigerian military counter-insurgency (COIN) against radical Islamist group, Boko Haram, underwent a period of great reorganization. Certainly, COIN operations in this phase of the conflict saw a larger role by the Air Force, and the local police played a supporting component role at battalion level. By and large, however, the military effort against Boko Haram remained centric around the Infantry function of the Army, with the creation of an Infantry division, the first in the Army’s history, and only its sixth manoeuvre division in over a decade.

With 7 Infantry Division (7 Inf Div) formed in Maiduguri, Borno State, in August 2013, contested areas of north-east Nigeria would be militarized as thousands of additional troops were deployed to the theatre of operations. This was the largest mobilization of the Nigerian Army since the civil war of the 1960s, and 7 Div’s creation, it was thought, would change the calculus of war and swing the engagement firmly in the favour of the Army’s troops.

Between 2013 and 2014, however, the Nigerian Army was not the only actor undergoing changes at the time. This also was a period characterized with a series of shifts by Boko Haram, away from the guerrilla-style tactic it had emphasized throughout 2012, when it fought 7 Div’s predecessor, Joint task Force Operation Restore Order (JTF ORO) to a stalemate. The difference however between changes by the Nigerian military and changes by Boko Haram, were that the latter’s changes — being largely tactical in nature — had near-instantaneous impact on wartime calculations. Up until 2013, Boko Haram’s covert front, employing pre-dawn raids, hit-and-run gun attacks in the daytime and at night, and improvised explosive devices (IEDs) as standalone assets or as part of fast-maturing Istishhad (martyrdom operations), dominated the insurgent’s threat.

The first shift by Boko Haram away from this doctrine, coming later in 2013, was towards mobile warfare tactics. Here, Boko Haram made use of its overt front — a standing army of irregulars that employed motorized infantry, protected mobility, towed artillery, and newly-acquired heavy guns in the aftermath of the Civil War of Libya — to launch a different and more mobile phase of its military campaign.[1]

There was a second shift shortly after, by the insurgent. Mobile warfare, by mid-2014, would give way to positional warfare and a territory-seeking strategy that initiated, rather than shied away from, the engagement. Within the military fighting phase that followed, Boko Haram demonstrated surprising resilience and fielded modified and refitted Nigerian Army towed guns and heavy armour, in addition to non-Nigerian vehicle mounted anti-aircraft assets. In three years, therefore, Boko Haram had demonstrated no less than two unique shifts in military doctrine. Thus, whereas the Army struggled to adapt its COIN doctrine, the insurgent demonstrated no such weakness over the same period.

Unable to build tactical momentum, and fighting a campaign that considered considerably more resources than it had at the time, the Nigerian military came to be greatly frustrated by Boko Haram who, through its overt and covert fronts created a security vacuum and endlessly harassed both the local populations and deployed military formations.

As a consequence of the escalation of hostilities by both sides, military fighting increased considerably relative to the previous phase. This, over time, brought about raft of changes and some innovation in war over the period between 2013 and 2014. Indeed, the Nigerian Army’s campaign by the end of 2014 was considerably different — unrecognizable in many respects as a now-mature Operation Zaman Lafiya — from the much smaller operations being conducted when the military first began fulfilling its task in 2011.

However, just because the campaign was expanding and the Army was aggressively adapting for war between 2012 and 2014, does not mean that the tactical momentum being built at the time was rapidly being translated to theatre-level results. This translation would take time, over 18 months in some instances, and well into 2015. Boko Haram would greatly exploit this period of reorganization.

Consequently, between the end of 2013 and early 2015, the reorganizing Nigerian Army would suffer some of its most embarrassing setbacks within the counter-insurgency. These setbacks are not a side-note to events in this period; they are central to the narrative on the campaign and to some extent, as I shall show over the pages of this paper, even influenced a number of campaign-level adjustments demonstrated by the Army since 2015. Arguably one of the most publicized  operational setbacks experienced within the COIN, was the Chibok Kidnappings of April 2014.

On 14 April 2014, in the town of Chibok 80 miles south of Maiduguri, over 200 schoolgirls were taken by Boko Haram. The Chibok Kidnapping as it came to be known provoked what seemed at the time as worldwide outrage, with the #Bring Back Our Girls movement gaining much media coverage[2].  This global outrage did not, per se, translate to substantive impact in the theatre of operations. Moreover, the kidnapping was neither the first, nor the last incident where groups of people were taken by Boko Haram. Kidnappings were but one tactic that Boko Haram had come to employ in its terror campaign. As Jon Hill writes of the incident, “Boko Haram has been in a state of perpetual evolution. It has actively embraced innovation and adaptation by constantly changing what it does, where and to whom. Abductions were added to its repertoire only a few years ago” [3]. Indeed, over the course of 2014, as international outrage continued over the kidnapping, Boko Haram continued its reign of terror and conducted more kidnappings undeterred by all the attention, which it was all too aware about. Hundreds more people – men, women and children – would be victims over this period[4]. Nor were kidnappings the only tactic employed by the group over this period. As an example, by the time of the Chibok kidnapping in April, over 1,500 had been reported killed in Boko Haram attacks in 2014[5]. Two months later in June, 31 young men and 60 women and girls were taken by the sect[6]. Most of these attacks occurred within the area of responsibility (AoR) of 7 Inf Div; within a 60-mile radius from Headquarters, 7 Div, Maiduguri.

Chibok however was perhaps the single largest talking point of Boko Haram’s threat, throughout Operation Zaman Lafiya, the phase of the Nigerian military counter-insurgency against Boko Haram between 2013 and 2015. Not only has the Army’s failure to locate the girls been politicized, the insecurity at Chibok that led to kidnapping has sparked a debate around the failure of Nigeria’s counter-insurgency response. Jon Hill for instance comments that the kidnappings were symptomatic of a weak counterterrorism strategy by Nigeria, indicative of (1) an overwhelming focus on kinetics, (2) questionable ability to escalate the COIN campaign towards results, (3) low cooperation between Nigeria and its Chad Basin neighbours, and (4) an unhealthy north-south political rivalry.[7]

Regarding actual details of the attack, there have been allegations that the Army had prior intelligence, up to four hours before Boko Haram arrival at Chibok, but failed to act (Mark 2014). Additionally, Jon Hill writes of “the inexplicable withdrawal of the soldiers guarding the school from which they were taken” (2014); though this seems to somewhat conflict with a report from the Guardian which notes that “soldiers held off the militants for almost an hour but fled when no reinforcements arrived” (Mark 2014). Responding for the Nigerian Army, Major General Chris Olukolade, its spokesman, commented that those accusing the Army of having prior intelligence and failing to act, “just want to give a dog a bad name in order to hang it. Their allegations are unfounded as usual”[8]. This is typical of failures within the COIN campaign: critics of the military’s approach make allegations; the military denies; and such failings ultimately are left poorly examined.

The intelligence may have been received, but summarily dismissed, because its sources could not be verified. Likewise, the intelligence may have been received, verified as accurate, but no action could be taken because there simply were not enough resources to mobilize a response in the timeframe. Maj. Gen Olukolade also may have been right – there is little substantive evidence that proves without doubt the Nigerian Army did receive information regard the Chibok attack, yet ignored it. Still, none of this absolves the Army of its failings in Chibok. Operational failures leading to the incident are indicative, at the very least, of (1) poor communication between troops in situ, and the nearest possible reinforcements outside Chibok; (2) poor tactical assessment of troops’ deployment in forward areas; (3) poor threat assessment: the local presence of Boko Haram was misjudged, and not for the first time; (4) a reluctance of ground forces to engage the enemy at the time – this point be less about cowardice in the face of the enemy per se, and more about the failure of echelons above brigade (EAB) to adequately equip and support outfield battalions.

Certainly, therefore, in looking at the Army’s preventative options related to the Chibok incident, there should have been a forward presence close enough to the town, from which mobilization could have been a realistic option.

Reorganizing of Troops in Forward Areas, in the Kidnapping Aftermath

The Chibok incident remains a low point of the Nigerian Army’s north-east campaign. Yet, there are some positives to emerge from it. One such positive was the formation of several new “roving” task force (TF) battalions to secure forward areas. As a result of these new battle groups, areas where the Army previously had little or no forward presence, now have field units with stronger reinforcement options. The aim here is not just a defensive role however, the newly-formed TF Battalions introduce an amplified deterrence factor. Figure 1 below highlights field unit deployments within Chibok and the surrounding towns, as of mid-2016. The field units deployed on the map below were not present at the time of the abductions in 2014. 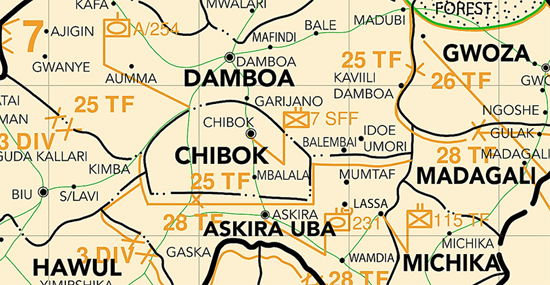 Whereas the Chibok Kidnapping has generated considerable media and academic attention, a number of other less publicized incidents occurred around the time that setback overall COIN progress by the Nigerian Army. Specifically, Boko Haram’s pivot towards military fighting meant the insurgent was more minded to attack hardened locations such as military formations, a number of which would be overrun by the insurgent between late 2013 and early 2015. Indeed, by the end of 2014, Boko Haram was not just a guerrilla outfit dependent on a doctrine of war avoidance to get by. This insurgent was very much willing to initiate contact and, when he did so, was surprisingly competent in the engagement. Consequently, it was military fighting, rather than guerrilla tactics such as kidnapping, that dominated Boko Haram’s calculus of war between 2014 and 2015 when the group’s territorial ambitions peaked. Thus, whereas an incident like Chibok was never repeated over the course of the insurgency, it may have been a combination of two factors: First, the fact that Boko Haram itself was not using guerrilla warfare, and kidnapping more specifically, as a main plank of its activity (like, for instance, militias in the Niger Delta did during their insurgency[10]). And second, the fact that the Nigerian military as a counter-insurgent, through a shift in its concept of operations, and a reorganization of forces in the forward areas, may well have deterred such attempts as the insurgency matured.

Akali Omeni completed his Ph.D with King’s College London at the Joint Services Command and Staff College (JSCSC), Defence Academy of the UK. His research centers on military counter-insurgency (COIN) in Nigeria. He has conducted fieldwork with military units prosecuting joint operations against Boko Haram insurgents in northeast Nigeria and militants in the Niger Delta. He has worked with British Army units assisting Nigerian forces in COIN, and have shared his findings with the British Parliament and Cabinet Office. He has a book published with Routledge (forthcoming, 2017): The Military and Counter-insurgency in Nigeria.