SWJ Book Review – Understanding Human Trafficking, Corruption, and the Optics of Misconduct in the Public, Private, and NGO Sectors: Causes, Actors, and Solutions

SWJ Book Review – Understanding Human Trafficking, Corruption, and the Optics of Misconduct in the Public, Private, and NGO Sectors: Causes, Actors, and Solutions 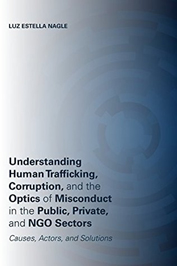 Understanding Human Trafficking by Luz Nagle takes the reader into the sometimes arcane yet important legal world for a master lesson in how global and domestic actors can and will fight the scourge that is human trafficking.  As a former Colombian judge, she excels in the legal definitional realm. Nagle is a Law Professor at Stetson University in Florida and an external researcher with the US Army War College Strategic Studies Institute (USAWC SSI).  In the 1980s she was a Judge in Medelín Colombia where she heard cases against the Medellín Cartel at the height of its power and challenge to the state which included the assassination of police, judges, and the downing of a civilian passenger jet.[1] It is difficult not to be impressed by her resume.  Her thesis here focuses on the role of corruption both public and private in enabling this industry.

Nagle, a legal expert, excels where she points to the loopholes in existing laws that make them de facto unenforceable.  Conversely, badly defined laws have turned good Samaritans into human traffickers as in the case of the Danish couple who gave a refugee family a ride to a train station without crossing an international boundary or receiving payment.  Unfortunately, Northern Europeans cannot write this off as a fluke prosecution given there were 279 other such prosecutions from 2015 to 2016 (p. 53).  This is particularly relevant to the United States given the Border Patrol now charges good Samaritans who give dying migrants aid, with human smuggling.[2]

The text supplies useful short summaries at the beginning of each chapter, and an appendix with the Palermo protocol against human trafficking as a useful reference for students and researchers.[3] In describing the US State Department Trafficking in Persons reports, she points to expert criticism of the reports which suggest they “pull punches” based on geopolitical considerations (pp. 62-65).

In her chapter on private corruption, Nagle points to the difficulties in achieving accountability.  Corporations have lawyers on staff to prevent their prosecution and “affluent individuals” are often first-time offenders who can plead to lesser charges.  On the other hand she points to bad press, boycotts, social media, and documentaries as changing public awareness on the issue.  She also describes the key points of the Yates memo which describes the possibility of holding corporate border members personally and criminally liable to deter bad action by corporate actors or their subcontractors (pp. 149-151).[4]

In one of the livelier chapters, Nagle takes on human trafficking NGOs which have at times exploited survivors of human trafficking for their own financial gain and even established reality TV shows about their work which has been criticized as potentially endangering trafficking victims (pp. 235-240).

One of the most elucidating chapters, focuses on the human trafficking for the purpose of organ trafficking industry, where she points out that public and private corruption come together.  Nagle brings the law to life with case studies such as the Rabbi Rosenbaum kidney trafficking conspiracy, which illegally profited from Israeli kidney donors to wealthy US recipients (pp. 19-193).

Areas for Improvement in Subsequent Editions

Due to the many acronyms, the book would have benefited from a table in the front matter defining the various acronyms.  While the book supplies many useful legalistic and training-based recommendations, in the era of Trump and rising nationalism, one cannot help but wonder what happens to trafficking victims when other policies have higher priority?  Can an undocumented trafficking victim expect help from an administration that simply does not want immigrants?  While Professor Nagle does touch upon structural issues such as poverty as a factor enabling human trafficking, later editions might address the rise of populism, nationalism, and authoritarianism globally in the context of human trafficking.[5]  In the context of stiffer penalties, the rise of nationalism might aid some of her policy recommendations, but given the potential for public corruption to expand, others may not.

Future editions could touch upon human trafficking through Mexico and the nexus between “cartels” or large organized crime groups and human trafficking.  Have these groups directly entered the market? Or do they simply charge extortion fees to human traffickers operating in their areas? Both answers are likely correct depending on locale and this work could add to the increasing body of work from those such as Slack (2019), who touch upon the complex relationships between human smugglers and the smuggled in violent drug trafficking zones.[6] The author could also expand the discussion of human trafficking in the context of the US-Mexico border.  Human trafficking in Mexico is an area ripe for discussion of some of Nagle’s key themes including public and private corruption, smuggling vs. trafficking, coercion, weak states (p. 110), adult vs. child trafficking, etc.

Finally, Nagle’s comprehensive work elucidates the body of international law—such as the UN Convention Against Transnational Organized Crime and the Palermo Protocols—making it a useful resource for studies in international legal regimes and the ways in which the liberal global order has and can solve international problems that transcend many borders.

Jeremy Slack, Deported to Death:  How Drug Violence Is Changing Migration on the US-Mexico Border. The California Series in Public Anthropology. Oakland: University of California Press, 2019.